By 2014, the second generation 'FC/FW'-series version of Renault's Kangoo van had evolved - but not beyond recognition. This 'Phase II' version was smarter, cleverer and better built. It's 'Energy' dCi diesel engines were also impressively economical, plus there was Zero Emissions all-electric technology for those wanting it. In this form, this van sold pretty much unchanged until the end of its production life in 2021. For the used customer in the market for a compact yet spacious used van, it's a strong contender.

By 2014, it was time to take a fresh look at the Renault Kangoo van. Though it had been on sale since 2008, the French brand had never stopped developing what was one of Europe's favourite compact LCVs. Hence the introduction in 2014 of this improved 'Phase II' model. By then, the Kangoo had been quite a success story for Renault. The first generation version was launched in 1997 to replace the boxy Extra model and had to last for eleven years before this MK2 design arrived as part of a fresh wave of more sophisticated, more car-like small vans. Over the years, Kangoo models have been built in France, Argentina, Morocco and Malaysia and sold as everything from MPVs to light 4x4s. Latterly though, the focus has been on the core panel van market, which this vehicle revitalised in 2011 by becoming the first LCV available with the option of all-electric power. By 2014 though, that technology was no longer unique in this segment. Plus there was much tougher competition in the form of all-new rivals like Ford's Transit Connect and the Mercedes Citan. The Citan was actually Kangoo-based and its development prompted Renault to make important changes to the quality and technology of this van - hence the introduction of the 'Phase II' version we're looking at here with its smarter front end styling. This MK2 Kangoo LCV sold in this form pretty much unchanged until the end of its production life in 2021.

If you know your Kangoos, then you'll immediately recognise this post-2014-era 'Phase II' version with its smarter front end styling that sees this more pronounced and upright Renault logo flanked by twin chrome strips and contrasted against a more stylish black grille. Whichever body style you choose - the 4.2 metre-long Kangoo Van or the 4.6 metre-long Maxi version - the cab is pretty much identical. Even on the largest Kangoo, because the windscreen is placed well forward of the driver, the impression is that you're at the helm of a much bigger vehicle than you really are. The basic dashboard design was originally lifted wholesale from the MK2 Scenic MPV, with its two-tone finish, dash-mounted gear lever and neat remote controls for the stereo on the steering column. So, which Kangoo is going to suit your business? We should probably point out to begin with that practicality isn't going to be affected by your choice of motive power. The all-electric 'Z.E.' version can take just as much as its diesel stablemates in terms of both size and weight. So it's down to body style choice, either the 3.0m3 Kangoo Van or the 4.0m3 Kangoo Maxi. Other rivals in this period can offer a little more loading room than this, but Kangoo customers can improve things by specifying the optional fold-forward front seat able boost those figures by around 0.5m3 in with both body styles. Load space length is 1476mm in this standard Kangoo Van and 1,862mm in the Maxi version. If, as we suggest you should, you've gone for a model fitted with the optional swivelling bulkhead and folding front passenger seat package, then you can increase those figures to 1,731mm - or as much as 2,886mm in the Maxi model. This vehicle's practicality may mean you'll find yourself carrying heavier loads so it's just as well that the payload allowances are reasonable. The standard Kangoo Van can carry between 650 and 800kg, depending on the version you choose. The Kangoo Maxi can carry 800kgs, though that figure falls to 740kgs if you need the people-carrying flexibility of the Crew Van version.

The MK2 Kangoo is a tough thing that can shrug off most of what even the most careless city driver will throw at it. It does ride lower than the original Mk1 and there's no all-wheel drive model, so it's not quite so clever on really bad surfaces. Check for crash damage, uneven tyre wear, kerbed alloys, parking dents, ripped or discoloured upholstery and make sure the electrical features such as central locking and infotainment screens work as expected.

(approx based on a 2015 Kangoo Z.E - Ex Vat) With the Z.E. full-Electric Kangoo, you can forget about having to pay for things like clutches, starter motors, cam belts or glow plugs - as you would on the alternative dCi diesel version. The Kangoo Z.E. does away with all that. Front brake pads are around £50, a new door mirror glass will be £35 and a replacement windscreen is £145.

At the wheel of a Kangoo, you sit very upright and the huge glass area gives an excellent view ahead. On country toads, there's actually a reasonable amount of grip, whilst in town, light power steering makes it easy to slot into tight spaces, although until you get used to the shape, judging the extremities of the car during parking manoeuvres can be slightly difficult as the bonnet slopes away from you. Engine-wise, most customers choose either 75bhp or 90bhp versions of the familiar but still rather noisy 1.5-litre dCi diesel which is mated to a 5-speed gearbox. Alternatively, you can opt for the all-electric 'Z.E.' Zero Emissions version, which feels quite a bit quicker than you might expect thanks to the fact that 100% of this Kangoo's 226Nm of torque is generated from standstill. Once underway, it is true that, because of the heavy 260kg weight of all those batteries, the power surge does tail off rapidly after 30mph, resulting in a total 0-62mph time of over 20s. But if you've an urban-based business, how often are you going to be driving at or near 60mph? Exactly. At more likely delivery speeds, the 44KW electric motor (which puts out the equivalent of 60bhp) feels crisp and remarkably responsive, plus of course, as with all electric models, you've the equivalent of an automatic gearbox, so there are no gear changes to worry about. The operating range between complete charges is quoted at 106 miles: in practice, we've found that a more realistic figure is between 60 to 70 miles. Still, Renault's research suggests that 70% of van drivers cover a daily distance of less than 62 miles, so for many that won't be an issue.

If you haven't tried a Kangoo for some time and you're in the market for a compact yet spacious van, it might well be time to give it another chance. In terms of efficiency and technology after all, this post-2014-era 'Phase II' design was almost unrecognisable from the original version of this second generation model we first saw in 2008. The electric Zero Emissions technology's a draw too. Many of the business buyers who automatically opt for one of the conventional 'Energy' dCi diesel versions would probably do well to consider it. Most though, will usually want to stay with what they know - and what they know about this vehicle is that it'll be as reliable, practical and economic as an LCV of this kind should be, but at the same time will probably undercut most of its competitors on price. That's the bottom line with this Kangoo. You can afford it. And it works - rather well in fact. For many business buyers, that'll be all they need to know. 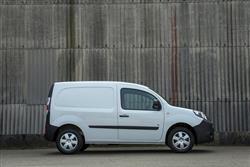 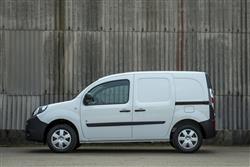 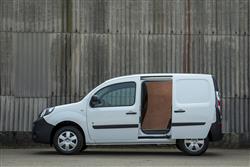 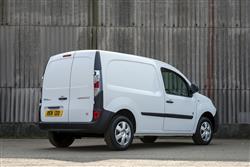 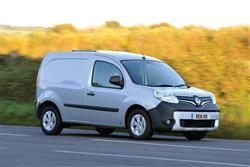 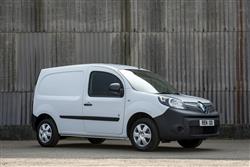