This second generation 'HC'-series Koleos crossover was launched in 2016 as the flagship model in Renault's SUV line-up when it was one of the most aspirational contenders the French brand had offered for some time. Gallic style allied to proven Nissan engineering has to be an appealing combination on the used market. Doesn't it?

So, what have we here? A Korean-built, French-branded, Japanese-engineered supersized Crossover SUV that you've almost certainly never considered owning, but possibly might quite like. Welcome, to this second generation Renault Koleos. It's strange to think that as recently as 2012, the Renault model line-up offered no SUVs whatsoever. Even back then, it was clear to almost anyone in the industry that this class of car would be crucial for ongoing automotive profitability, but in its haste to embrace all-electric mobility, the French manufacturer had taken its eye off the ball in this regard. This might have been disastrous, had it not been for the maker's partnership with Japanese maker Nissan, a marque that for some time back then had been setting the standard when it came to what a volume-branded SUV should be like. Thanks to this tie-up, Renault was quickly able to re-package that company's Crossover product range and fill its showrooms with three new SUVs delivering the kind of car people increasingly wanted. The little Captur model was first, followed by the bigger Qashqai-sized Kadjar. Then in late 2016, this was followed up by the largest member of the trio, the plusher, more spacious Koleos. This then, was Renault getting serious about SUVs, but it wasn't the first time the company had tried to address the crossover segment. Back in 2007, the brand dipped its toe into this sector with another model badged Koleos', this a smaller contender that shared its engineering with a first generation Nissan Qashqai, but lacked that model's sharp handling and fashionable feel. It didn't have a lot else to recommend it either and as a result, almost no one wanted that early 'HY'-series MK1 Koleos, hence the need to rather ignominiously withdraw the car from our market after just three years on sale, though it continued to be offered in Europe until 2015. In the years following though, lessons were learnt and this handsome, almost premium-looking 'HC'-series MK2 Koleos contender was the result, built at a state-of-the-art Renault Nissan Alliance factory in Busan, South Korea and launched in the UK in the Spring of 2017. It was based on a Nissan X-Trail, but didn't have that model's third row seating option. In some ways, that was understandable - Renault was keen to avoid any prospect of customer overlap with its Grand Scenic 7-seat MPV - but this omission did put this car at something of a disadvantage when it came to stealing sales from similarly-sized SUVs - not only the X-Trail but also cars like Skoda's Kodiaq, Volkswagen's Tiguan, Peugeot's 5008 and Mitsubishi's Outlander. Maybe also slightly pricier options like Land Rover's Discovery Sport, Hyundai's Santa Fe and Kia's Sorento. At launch, Renault was keen to point out though that the five-seat formula was working well enough in this segment for relatively contenders like the Ford Edge, the Toyota RAV4 and the Honda CR-V. But it didn't work particularly well for the Koleos and, despite a facelift in Spring 2020, sales were slow and the car was withdrawn from Renault's UK line-up in late 2020.

Renault makes some stylish large cars these days, though few of them now make it to our market. Here, in the form of a contender we did get, is proof of that. From its period, the Koleos was one of the sector's more elegant volume-branded larger SUVs. Inside, this Koleos wasn't a big step up pricewise from Renault's other mid-sized SUV, the Kadjar, but it feels a world apart from that model behind the wheel. Go for this model's plusher 'Signature Nav' trim and there's lovely stitched leather upholstery and, perhaps a little less agreeably, faux wood veneer inlays, applied to the dash and the doors. The other feature that sets a 'Signature'-trimmed Koleos apart is the provision of Renault's idea of state-of-the-art infotainment, a 8.7-inch 'portrait'-style centre dash 'R-Link 2' touchscreen, there to bring a touch of Tesla to this family SUV. In the rear, there's further evidence of careful design. The doors, for example, open with one of the widest apertures in the class. Once inside, you'll find yourself in another part of this car that's a real step up from its Kadjar showroom stablemate. Whereas in that model, fitting in a family of five is a bit of a squeeze, here it's a breeze, courtesy of an extended CMF platform that gives this Koleos one of the longest wheelbase lengths in the class. As for the boot, well inside, a 579-litre space is revealed. A removable boot floor is positioned at the same height as the sill to form a flat base for the cargo area and beneath it, there's a compartmented tray for smaller items you might want to keep out of sight.

In our ownership survey, there were a few owners who'd had problems. One reported that sometimes the car wouldn't start, at which point it ran through a whole menu of faults on its display screen - things like 'Check exhaust emissions', 'fuel injection system failure', 'power steering fault', 'brake system fault'. This car quickly needed two new injectors. During Koleos II production, Renault issued a recall regarding a nut on the steering column that may become loose; check that this was attended to. Check the car from light off road (or urban) scuffs and dents. And make particular sure that all the electrical functions work as they should. Check for interior child scuffs. And alloy wheels scratches. And insist on a fully stamped-up service history.

What do you expect an SUV like this to be? Comfortable, relatively quiet and possessed of decent pulling power? These, almost any potential buyer's minimum requirements, are adequately dealt with by the Koleos. If you'd like more than that, then you may need to manage your expectations a little. Renault successfully engineered the ride of this contender to be very comfortable at speed, though this set-up also allows for a rather old-school style of body roll through the bends. In keeping with all of this, the steering's light, though at least it's precise, which should make the car easy to place at speed through tighter turns if you find yourself running late on the school run. Plus of course it's effortless around town. As for engines, well from launch there were two, both diesels, a 1.6-litre dCi 130 variant offered with manual transmission and front wheel drive. And a 2.0-litre dCi 175 derivative, only available with 4WD and offered with either manual transmission or a rather slow-shifting optional CVT auto gearbox. Both units have decent pulling power - 380Nm in the case of the 2.0-litre variant - enough to facilitate a braked towing capacity of two tonnes with the manual models. And they're reasonably efficient, the manual dCi 175 version capable of 50.4mpg on the combined cycle and 148g/km of CO2 (both NEDC figures). The 4WD system is the usual Nissan-derived on-demand 'ALL MODE 4x4-i' set-up that should deal with muddy tracks and icy mornings in its stride. The 2019/2020 facelift brought a 1.8-litre dCi diesel engine with 150hp to replace the 1.6-litre dCi unit.

Normally these days, the reason why you super-size a family-class Qashqai-segment SUV is to give it seven seats - but not always. Cars from this category like Toyota's RAV4, Mazda's CX-5 and Honda's CR-V have sold in their global millions in five-seat form and here, Renault took that formula and made it more spacious and luxurious. In the second half of the 21st century's second decade, we saw the Ford Edge do a similar thing in this sector, but the Koleos more affordably delivered much the same kind of package. You may also warm to it if you're amongst those looking at five-seat versions of bigger mid-sized SUVs like the Skoda Kodiaq, the Volkswagen Tiguan and the Hyundai Santa Fe from this period, all of which will cost you more if you choose comparably-engined variants equipped to a Koleos standard of spec. Of course, there are issues you'll need to take into account in considering this car. You get handling that's even more ponderous than it usually tends to be in an SUV of this size and if you get a variant equipped with the CVT auto gearbox, you'll get a transmission to match. We don't think many potential buyers will care very much about that, but they might, like us, feel that the ride quality should be slightly better than it is. And in summary? Well for those who might have forgotten that Renault can make a very creditable mid-sized luxury car, the Koleos offered a welcome reminder of the fact. There was certainly enough space, luxury, style and value on offer here to give this model credibility in this segment during its period on sale and that's made it an interesting used car option in this segment, providing you can find one that's been well looked after. 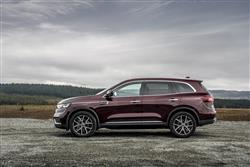 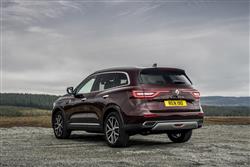 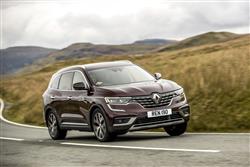 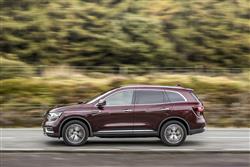 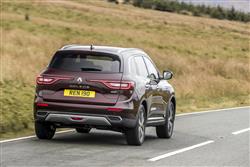 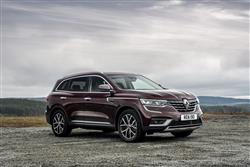