With smarter looks, extra efficiency and plenty of technology, the third generation Renault Trafic launched in 2014 aimed to build on the huge success of its predecessor in the medium-sized van segment. It's a Transit Custom and Volkswagen Transporter LCV rival that in MK2 form was much easier to live with and nicer to drive. Which all means that if you're choosing a vehicle of this kind from the 2014-2019 era for your business, it needs to be on your shortlist.

This MK3 model Trafic van was a very important van indeed - at least for its makers Renault. Back in 2014, at a time when a risky development emphasis on electric power had left sales of the company's passenger cars under threat, the brand's continued leadership of the European Light Commercial Vehicle segment was crucial. And more than any other product, this was the vehicle that was tasked with sustaining that. It certainly needed to make good on its glossy brochure promises in order to face down direct medium-sized LCV rivals from the period as talented as Ford's Transit Custom, Volkswagen's Transporter, Mercedes' Vito and the shared design sold as either a Peugeot Expert, a Citroen Dispatch or a Fiat Scudo. An even tougher challenge for Renault lay in differentiating this product from its near-identical design stablemate from the 2014-2019 period, Vauxhall's Vivaro. Your selection between this vehicle and its Vauxhall counterpart on the used market may come down to deals and personal preference but if Renault's claims for this MK3 Trafic model are correct, then you could find yourself choosing this design over other market sector rivals for more concrete reasons. The downsized 1.6-litre diesel engines look impressively clean and frugal, the large load area may be bigger than you expect and the infotainment provision is quite comprehensive for a van from this era. This model sold in this form until 2019, when it was significantly updated with 2.0-litre diesel engines. It's the earlier 1.6-litre 2014-2019-era Trafic models though, that we look at here.

Though this design was shared between several brands, when produced as a Renault Trafic, it certainly had its own identity, with a more assertive front end than its predecessor. Slender headlamp units flank a large front grille that presents the Renault diamond emblem centre and upright above a black contrast strip. And the windscreen is steeply-raked and car-like, creating a distinct break from the line of the bonnet. Once you're in the cab, you'll find style and switchgear that very much conformed to Renault's 2014-era design language. Especially the instrument cluster with its oval centre digital read-out and flanking round rev counter and fuel gauges. It was borrowed straight from the brand's little Clio supermini. Elsewhere around the dash, there are quality touches - like the chunky three-spoke wheel and the chrome-effect surround for the instrument panel. And stuff that doesn't feel quite as smart - like the entry-level stereo system and the air conditioning controls. If you ran a second generation Trafic model, you'll also notice quite a lot of extra space too, this MK3 design offering an extra 116mm of cabin length for all front seat occupants. Well, almost all. If you happen to have drawn the short straw and find yourself stuck in the middle of the cab in front of the dash-mounted gearstick, your journey will be as comfort-compromised as it always is in vans that offer such an extra middle seat berth. We're not going to criticise that. There's not much the designers can do to make this feature more usable and you might be thankful to have it if, for instance, you need to do things like drop the kids off at school on the way to work. In any case, if you've got yourself a model with the 'mobile office'-style folding front seat, you'll find that most of the time, you won't be using this space for seating anyway. Fold it down and you've got yourself a workable desk surface with a (rather flimsy-feeling) clipboard attachment and ample space for a laptop you can quickly link into the various infotainment technology features on offer via an optional 7-inch colour touchscreen.

These vans are pretty tough, but there are a few things you'll need to look out for. It's the usual advice with small vans to buy on condition rather than year and look for a van that has tended to have performed lightweight delivery duties rather than consistently butting up against its payload limits. We've heard reports of gearbox faults: listen hard for whining noises on your test drive. There've been a few issues with the electrics, so make sure that all the connectivity works properly - Bluetooth-linking and so on. Check for load bay scuffs and scratches. And insist on a fully stamped-up service history.

Renault claimed that this third generation Trafic would feel pretty much like a large MPV to drive - and they were not too far from the mark. That's primarily due to very decent ride quality you really notice over bumpy British tarmac. It's something the engineers somehow managed to achieve at the same time as keeping body roll in check through the corners. Is this as good a compromise as Ford managed to achieve with its rival Transit Custom sold in this period? Not quite - but it gets very close. What else? Well the driving position's as commanding as you would expect and big door mirrors with convex surfacing on their lower and outer edges are present and correct to help with manoeuvring that can be aided by the neat wide angle mirror fitted to the back of the passenger sunvisor. The big news though, with this third generation Trafic range lay under the bonnet where you'll find a lower-capacity range of engines powering a higher-capacity range of vans. It doesn't sound like a particularly great idea on paper, but fortunately makes a lot of sense in this model in practice. That's because the powerplant in question is the brand's well-regarded 1.6-litre dCi unit, an engine quite up to the task of effectively replacing the noisy old-tech 2.0-litre diesels used in this model's predecessor.

The van market is changing - and in third generation form, this Renault Trafic needed to change with it: it did. This third generation design was certainly long in development, but the time was well spent, creating a product that's not only more practical and efficient than the old MK2 model but also has the potential to function as an office on the road. An owner-driver could be pretty much permanently based in the thing if they so wished. We especially like the careful touches: the load-through facility in the full-steel bulkhead that lets you poke long items into the cab. The 'Eco Mode' driving option that makes it easy to lower your running costs. The Mobile Office package with its folding front seat. The way you can mount your smartphone or tablet on the dashboard to work with Renault's clever R&GO app. And the wide-angle passenger sunvisor mirror that helps when reversing. Though back in 2014, we had seen some of these things before in other LCV products, they were delivered here with a greater level of thought and thoroughness that operators will like. It'll all make quite a difference in a vehicle that wants to be as crucial in the business lives of its customers as it will be to its brand. It certainly looks well equipped for that job. Your righthand van? That's about the size of it. 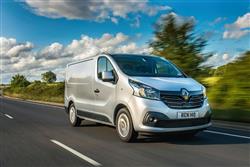 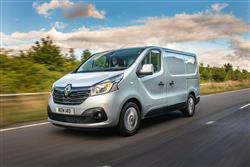 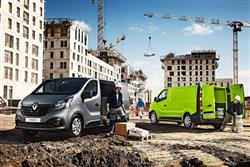 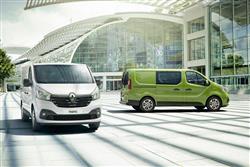 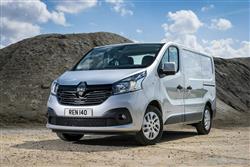