Buying a middleweight panel van used to be easy. You bought a Transit. That was before the turn of the century when Renault introduced its second generation Trafic and alongside it came the rebadged Nissan Primastar and the Vauxhall Vivaro. Suddenly the van marketplace was a whole lot fiercer. Here we take a look at Renault's LCV contender and assess whether a used example has just as much going for it.

Yes, we could go right back to 1981 when Renault first introduced the Trafic van but if you can still find one of these early vans in serviceable condition, you can count yourself extremely lucky. You'll be luckier still if you find one of the post-2001 models as they're simply a better van in every measurable regard. Despite the Vauxhall and Nissan sister vehicles, make no mistake; this was very much a Renault design. Although versions were built in Luton and Barcelona, the Trafic was designed at the Renault Technocentre near Paris and the detailed engineering was performed by Renault's LCV team at Villiers-Saint-Frederic. There was a key change in 2006 when Renault introduced a range of greener 2.0-litre CDTi Euro IV-compliant models, but we'll focus here mainly on the models introduced from 2010 onwards, the so-called 'Trafic Phase 3'. These continued to be sold right through to 2104, when an all-new Trafic van was introduced.

The avant garde shape which rolled down production lines in both Luton and Spain still works as well as the day this design first hit the market in 2001. The distinctive domed roof makes the vehicle easier to enter and improves side visibility. Other careful touches include the large front bumper with its integrated turn indicators and fog lamps, sitting just below the large, clear-glass headlamps. At the rear, the tail lights extend high up towards the roof from the rear bumper for better traffic visibility. Build quality isn't quite as strong as you'd find in a Mercedes Vito or a Volkswagen Transporter - but then, you're not paying that kind of money. Inside the cab, it's all very car-like - as you'd expect from a modern van. There's theoretically room for three at the front but in practice, the gearstick gets in the way of the middle seat, even though it's dash-mounted. Stuff we like includes the hook for your Friday night takeaway, the one-button locking for all the doors and the remote controls for the stereo off the steering wheel. The equipment list includes practical options like keyless-entry central locking and a useful load-securing system that offers sliding fastening points for your cargo. Obvious rivals apart from this design's Nissan Primastar and Vauxhall Vivaro clones include Ford's Transit, Citroen's Dispatch, Fiat's Scudo and Peugeot's Expert. As you might expect, there's a wide choice of variants on offer. The basic selection is between two wheelbases (short and long - 3098mm and 3498mm), two roof heights (short and high, 1.96m and 2.50m) and various body types: panel van, refrigerated panel van, platform cab, a double-deck dropside and a 9-seat minibus. If you need to transport both people and packages, there's also a popular six-seat Trafic Crew Van variant, offered in both short and long wheelbase versions of the low roof models, with a load area of up to 4m??. The best selling model in the preferable later 'Phase 3' model line-up was the SL (short wheelbase, low roof) panel van version and the trim level most in demand on the used market is the Sport version. Aside from the model's full steel bulkhead, remote central locking with deadlocking and R.A.I.D. system (Renault Anti-Intruder Device door locking above 5mph), the Trafic Phase 3 range offered as standard two business user must-haves: Bluetooth and Carminat TomTom satellite navigation. Top-of-the-range Sport models got 16" alloy wheels, air conditioning and essential chilled glovebox, driver armrest, electric windows and door mirrors, metallic paint and multi-function trip computer. Crew Van versions boasted left and right side glazed sliding doors, a removable rear seat base and integral bulkhead with glazed panel. Key options included auto lights and wipers, three-button key with selective door opening, ESP, and (unusually on a panel van) climate control.

The Trafic has earned a decent reputation for reliability, being the beneficiary of long years of continual development. The interior isn't the last word in sophistication but it is hardwearing. Check for damage to locks, tired rear suspension, slipping clutches and brakes and make sure that the load bay tie-downs aren't bent or broken. The engines tend to be very rugged, but check that the glow plugs are good and those with over 80,000 miles on the clocks are due for alternator replacements. 72,000 miles is also the time that cam belts need changing. If this hasn't been done, you'll need to negotiate a £350 discount. Check the brake pads and discs as Trafics can eat through these if they're regularly driven fully loaded. The final thing you'll need to look at is the engine management light on the dash when you key the ignition. If it doesn't go out after a second or two, it could point to a potentially expensive fault in the wiring loom or the electronic engine control unit - or a cheaper issue with the camshaft sensor. Bear in mind that Renault dealers will often refer your Trafic to a Vauxhall technical centre for repairs.

(approx prices, based on a 2011 Trafic SW27 panel van) Renault parts aren't the cheapest in the commercial vehicle world but consumables aren't too expensive. The major jobs for the Trafic will tend to cost you around £500 for glow plug replacements, £1,000 for fuel injectors, £2,000 to swap out the fuel pump and around £1,000 to replace a tired gearbox.

On the move, though newer designs better the second generation Trafic in terms of ride and refinement, the handling remains safe and predictable. Certainly, if you've had any experience with an early 1.9-litre CDTi version of this model, you'll notice a big difference at the wheel of the post-2006 2.0-litre Euro IV-compliant version. It's still front wheel drive but the more modern 90 and 115PS engines offer higher performance with practically the same fuel consumption as their older predecessors, but have up to 26 per cent more pulling power, with torque up to 240Nm for the entry-level unit, and 290Nm for the 115PS engine. We'd go for the 115PS unit if you possibly can, strong enough to raise the Trafic's top speed by 9mph to 99mph.There are maximum trailer weights of 2000kg (braked) and 750kg (unbraked). Some original buyers opted for the more powerful version fitted with the 145PS 2.5-litre CDTi engine that sat at the top of the line-up. Here, 320Nm of torque makes light work of hauling really heavy loads all the way up to an academic top speed of 106mph. All Trafics get a six-speed manual gearbox as standard and unless you go for the entry-level 90PS version, there's also the option of finding an example fitted with the clever semi-automatic Quickshift6 transmission. That will be useful for urban drivers, who will also appreciate the tight turning circle - 13.2m between kerbs and 13.7m between walls, with 3.2 turns of the power steering lock-to-lock.

The second generation Renault Trafic improved a great deal in 2006 when new engines were introduced and the 2010 revisions added another level of refinement that carried this mid-sized LCV through to its 2014 MK3 replacement. As with all used commercial vehicles, you need to ensure that the previous owner has not only been diligent in the servicing and general upkeep of the van, but has also ensured that it's been operated in a responsible manner. Look at a few examples and pick on condition and provenance rather than mileage or trim. There's no shortage of used stock, so be fussy and you should land yourself a reliable workhorse. 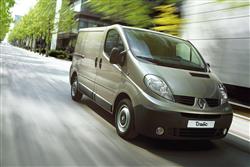 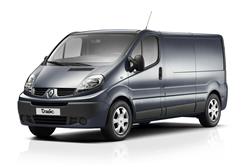 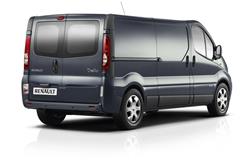 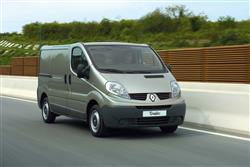 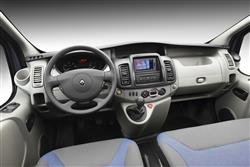 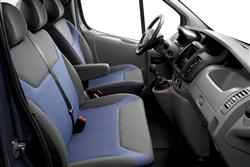