The Renault Twingo made its reputation as a car that didn't play by the rules and this third generation model reprises that theme. The rear-engined layout makes all kinds of sense for a citycar and the range-topping Dynamique ENERGY model is sure to be very popular indeed.

When choosing a city car, what are the key criteria you'd prioritise when making a decision? If you're like most people, you want something that's easy to drive, that looks good, that handles well, doesn't look too cheapskate or, even worse, too try-hard and represents decent value. These days the list of cars that fulfil those requirements has grown considerably, but Renault might well have manoeuvred itself into pole position with its third generation Twingo. The most notable feature about this car is an engineering detail that many buyers might not care about. Instead of being under the bonnet, the engine is instead located beneath the boot floor, sharing its chassis with the next-generation Smart car. You can get it with a 70PS powerplant which will be enough for most, but working on the basis that you can never have too much power in a rear-engined car, we'd prefer the 90PS Dynamique ENERGY model.

The three-cylinder engine displaces a modest 898cc and develops 90PS and 135Nm of torque. It's been cleverly angled to 49 degrees to increase interior space and deploy its power through a compact five-speed manual gearbox. Thankfully the Twingo only weighs around 950kg, so this engine will punt it to 62mph in a zippy 10.8 seconds with a top speed of 103mph. That makes it a full 3.7 seconds quicker to 62mph than the 70PS model and while the Twingo isn't targeting hot hatch drivers, that added urge is going to make quite a difference when pulling out onto fast-moving roundabouts or dicing with the cut and thrust of motorway traffic. This flagship version also gets Variable Gear Ratio power-assisted steering, taking the effort out of quick manoeuvres. The advantages of a rear-mounted engine in a city car are easy to appreciate. Even with a smallish engine up front, turning circles are often compromised by the amount of under-bonnet real estate the front wheels have to move in. With no engine to worry about, you can offer a genuinely tiny 8.65m turning circle. With the wheels at each corner of the car, you're not going to get the sort of weighty, tail-endy feeling you'd get in a 'traditional' rear-engined model where the engine's slung a long way out beyond the rear axle.

If you didn't know the engine was where you'd normally put your shopping, you'd probably never guess from the outside. The Twingo has a fairly conventional city car silhouette, with elements of Fiat 500 in its cheeky domed profile. The front end adopts the usual Renault family face with bulging headlamps and a detail strip that frames the huge centrally-mounted Renault diamond. Punched inboard of the headlight pods are LED daytime running lights. The design team, headed up by Laurens van den Acker, wanted to evoke the feel of the Renault 5 and the rake of the Twingo's rear screen and the prominent shoulders are said to be inspired by the rear-engined Renault 5 Turbo. That might be a bit of a stretch for most of us to spot. Meanwhile, the new city car's five-door architecture - a first in the history of the model - makes it the most versatile Twingo to date. The Twingo is around 100mm shorter than its predecessor, but due to a longer wheelbase, the cabin length has increased by 130mm. Luggage capacity is 219-litres and can be extended to 980-litres by folding the 50:50 split rear seats. There is also 52-litres of personal storage space within the cabin, including a removable 2.6-litre compartment at the bottom of the centre console, 29-litres of space beneath the front seats - with nets available to hold items in place - and a 6.4-litre glovebox.

As you might expect, economy and emissions figures make reassuring reading. The Slovenian-built Twingo Dynamique ENERGY will get 65.7 miles from a gallon of 95RON, just dipping under the 100g/km threshold too at 99g/km. In fact, this engine does even better than the entry-level 70PS unit, which 'only' manages 62.8mpg and 105g/km by comparison. The Dynamique models get Renault's Stop & Start system, which cuts the engine when the car is stationary in traffic to reduce emissions and further improve economy. No diesel version has been released, Renault claiming that the limited amount of space for the engine precludes the fitment of a bigger and heavier diesel engine with all of its ancillaries. Still, the market for diesel city cars has always been marginal, so you're probably not missing too much. Residual values ought to be very good, as the Twingo has created quite a buzz and the personalisation options available allow second owners to customise the car to their requirements.

Choosing something that's genuinely new and fresh can be tough when buying a citycar. After all, the basic template hasn't changed a lot in the past few years. The Renault Twingo changes all that. Here's a car that dares to be different and looks set to be rewarded for it. The 90PS Dynamique ENERGY model isn't going to be the biggest seller in the range but it's the car you ought to buy. The reason? It offers so much more go than the 70PS car and only costs £700 more, you get the clever variable gear steering system included and there's the option of the Sport Pack to further juice up the looks of your Twingo. Until, or indeed if, Renault gets round to making an RS version of the Twingo, this model is as peppy as it gets. Clearly, Renault is going to have to deal with the internecine challenge from the Smart Forfour, the car which shares its underpinnings, and much will hinge on how the Smart is priced, but the Twingo has the head start in the market and that is often crucial. Right now, it's hard to think of a much more attractive citycar than this 90PS version of Renault's rear-engined riposte. 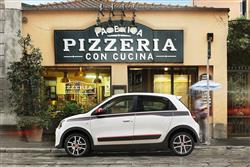 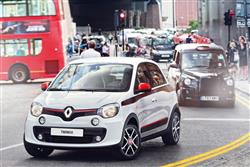