Renault's third generation Twingo might look like a conventional citycar but under the skin, it offers a very different approach the whole business of urban mobility. The decision to mount its engine at the rear made this model almost unique in this segment, freeing up extra interior space and making the car brilliantly nippy in crowded city streets. If that's just what you're after in an affordable little used runabout, it's well worth a look.

Citycars need to be short, spacious and manoeuvrable and every designer worth their salt knows exactly how you achieve that. By putting the engine in the rear. That'll give you a shorter bonnet, extra interior space and a turning circle like a London taxi. It'll give you a car like this, Renault's clever third generation Twingo. Yes, you heard that right: the engine's in the boot - or more accurately, under the boot floor, exactly like a Porsche 911 or, more pertinently in this case, the smart fortwo. It's hardly a new concept: sticking the oily bits back here was pretty popular as long ago as the Sixties when cars like the Hillman Imp, the Skoda 110 and original versions of the Volkswagen Beetle and the Fiat 500 all sold in huge numbers with the motor slung out at the rear. The modern era though, has belonged to front-engined front wheel drive design. Manufacturers say that cars of this kind are safer and more spacious but the real reason they favour them is that such vehicles are cheaper to produce. Only Daimler's dinky smart brand begged to differ on the subject, proving at the turn of the century with the car that would become their two-seater fortwo model that the concept could still work in an up-to-the-minute urban runabout. Smart were convinced the configuration could be made to work with a properly-sized four-seater citycar too and in 2008, convinced Renault to join them in developing one. With a history of innovation dating all the way back to 1993, the French brand's smallest Twingo model would, it was felt, be well suited to such an unusual drive layout - and claimed to be in this third generation guise, launched here in the Autumn of 2014. It was developed - and built - alongside smart's forfour model but apart from that car, there was no other four-seater compact vehicle on the market in this period daring to be different in quite the same way. Sales though were modest and the car was quietly dropped in early 2019.

Most Twingo owners we came across were pretty satisfied, but inevitably, some issues were thrown up by our survey. We came across a number of glitches with the R-Link2 infotainment and sat nav system - things like out-of-date maps and issues with DAB drop-out. Examine for flaking of paint on the bumpers and check that the air conditioning works and that the pixels on the centre display are all good. Also check for rear bumper scrapes. Also check that the Bluetooth pairs reliably with your phone handset. Whatever variant you're looking at, check tyres, exhausts and front suspension alignment carefully and try to establish if the previous keeper was diligent in the car's upkeep. Look for parking scratches on the alloys and evidence of child damage on the interior plastics and upholstery. All of these issues are common and could give you scope for price negotiation. There were a few recalls you should be aware of. Make sure they've been sorted by the dealer if the car you're looking at might be affected. One related to the seatbelt latches of Twingos made between October and November in 2014; these could separate from the buckles in the event of a collision. Renault dealers should have recalled affected cars and replaced the relevant seatbelt buckles. There was a possibility that the upper part of the bonnet skin could detach from the rest of the bonnet due to poor adhesives on examples built between May 2014 and July 2015. Dealers were instructed to add reinforcements to the bonnet skin to prevent it from separating. Similar to that recall, the skin of the rear spoiler could potentially separate due to poor adhesives being used on cars built between May 2014 and December 2016, so dealers should have reinforced the spoiler on affected cars to prevent this issue from occurring.

So, how does it feel to drive? Well to be honest, if you weren't told beforehand that the engine was in the back, you probably wouldn't realise the fact - which is probably about as big a compliment as we could pay Renault regarding this Twingo's handling neutrality. Essentially, though the driving position is a little more commanding than most, in every other respect, on first acquaintance at least, this feels just like any other modestly-powered city runabout. Or at least it does until you come to tightly twirl the wheel. In this car, the front wheels can turn to an impressive 45 degree angle: more typically, urban runabouts are limited to about 30-degrees. As a result, this car offers a super-tight turning circle of just 8.59m - which is pretty much on par with a London taxi cab and over a metre tighter than any other rival can offer. Most original buyers opted for the base 70PS 1.0-litre SCe petrol unit, three cylinders in size - as is common in this segment - but offering a mere 91Nm of pulling power, which explains the distinctly leisurely performance. If you really can't face going quite that slowly and feel prepared to pay a little more for your Twingo, then you should seek out the other mainstream engine on offer, the TCe 0.9-litre turbo unit. This was mainly offered in 90PS form, but between 2016 and 2018, a rare Twingo GT junior hot hatch with a 110PS version of this unit was offered.

Here was another example of Renault once again being willing to do things a little differently. This company has often been at its best when it tears up the rulebook. It did that way back in 1993 in creating the original Twingo model and again did so here with that car's appealing third generation successor. The almost unique selling point in this case, the rear wheel drive layout, ought to be just another engineering solution, though a very intriguing one. In practice though, it's more than that, conferring upon this car a different feel and giving it a more individual character you can then further personalise to your heart's content. That specialness - that individuality - is something you'll enjoy every day in ownership of this Renault. When marvelling at how easy it is to see out of: how simple it is to park: and how tightly it can turn. In other words, it's about more than just stickers and colour co-ordination. The technology's supremely user-friendly too, smartphone-savvy right across the range. And in summary? Well it's true that some other citycar rivals from this period might be cheaper, slightly more efficient or a little better built. But try any one of them after living with a Twingo and you might well find the ownership proposition a little. mundane and conventional. Isn't life too short for that? If you think that it is and you're shopping in this segment, then here's a great place to start. 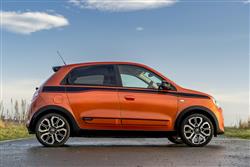 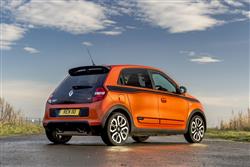 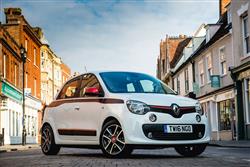 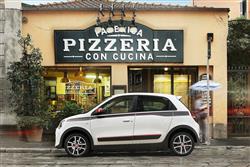 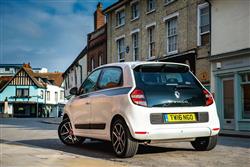 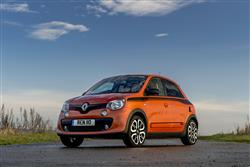