Imagine roads free of engine noise and pollution. And a car that travels them silently, frugally and stylishly, yet one you can afford that's practical enough for family use. A distant dream? Or an actual reality in the form of this car, Renault's pure electric model, the clever little ZOE, first launched in 2012. Does it make sense as a used buy? Let's find out.

At the turn of the century, Renault bet all its chips on the battery-powered sector and made a £4 billion investment in new models - to remarkably little effect. There was the crazy Twizy city scoot, the boring mid-size Fluence Z.E. and also pricey Z.E. versions of the Kangoo and Master vans. All of which generated about as much popular interest as Brighton Beach on a wet weekend. The only Renault EV we thought showed some promise was this ZOE, a handsomely styled supermini launched in 2012. High pricing and low driving range from the little 22kWh battery initially held the car back, but the French maker persevered, continually improving it as battery technology developed through a series of incremental updates. A more efficient R90 electric motor was introduced in 2015, a gutsier Z.E.40 battery arrived in 2016 and an even more powerful 80kW R110 electric motor arrived to drive it in 2018. A further update with a Z.E. 50 52kWh batter arrived in 2019, but it's the earlier models we look at here.

Choosing all-electric motoring is radical enough, without having to be faced with wild and wacky styling that marks you out on the High Street as an extravagant early adopter. With this ZOE though, the company got the look just about right, rejecting futuristic early design sketches in favour of a smart but very stylish look penned by Spanish designer Jean Semeriva. The front end features the familiar big Renault badge, but because the lack of an engine means that it doesn't need to be surrounded by a huge gaping grille, the stylists were given licence to create a smoothly striking face. There's no practical need for a wide front air intake either, but it's there anyway, creating a smiling appearance with dimples either side housing daytime running lights that sit below swoopy headlamp units, each fitted with seven separate lights. Like the fourth generation Clio this car was based upon, there's a wheel-at-each-corner stance and beautiful finishing, summed up in the way the two swage lines on the flanks run through the rear door, giving the side of the ZOE real shape and tension. In fact, everywhere you look, there seems to be a detail to catch the eye. The blue tinting you'll find on the headlamps and rear glazing. The beautifully integrated charging socket at the front, with its Z.E. diodes. The transparently finished rear lights with blue concentric rims that turn red only at night or under braking. And rear door handles that carry stylist Semeriva's personal signature in the form of his thumb print. Yes really. So it looks the part outside. What's it like indoors? Whatever your interior colour preference, the cabin emphasis remains the same, focused on two areas. First there's the floating centre dash panel that houses the R-Link multimedia system's 7" colour touchscreen. And second, there's a trendy sliver of an instrument binnacle in front of the driver, a TFT screen that replaces the traditional analogue dials with a digital speedo, along with state-of-charge and range indicators, plus an econometer which shows if the vehicle is using or recovering energy at any given time. Being able to integrate almost all of the controls into these two areas means the rest of the dashboard can be refreshingly simple. In fact, there's not much more to get to grips with. Heater controls, electric windows, mirror adjustment and that's pretty much it, all pretty straightforward. Inevitably, because the battery pack is mounted beneath front and rear seats, you have to sit fairly high up in the car, which is why, unfortunately, it's not possible to have a height-adjustable driver's seat. Still, the wheel has enough adjustment for reach and rake to ensure that most will be able to find an acceptable driving position. Nice touches include the beautifully finished gear shifter and the chromed door pulls, while on plusher models, the seat fabric was treated with Teflon so it's water and stain resistant. As for back seat space, well it seems as if it might be a bit restricted at first glance, for the rear doors feel a bit short from the outside, a by-product of this car's relatively compact 2,588mm wheelbase. Once inside though, there's more room than most superminis can offer: in fact, if you had to squeeze in three adults in a car of this class, you'd want the model in question to be a ZOE, for the lack of any kind of central transmission tunnel means that the middle perch is a much more viable place to be than is usual in the supermini segment. It goes without saying that three children will be quite comfortable. Which brings us to the boot - and why it's so big. But then it would be. This car's built upon a chassis that would normally have to package in a fuel tank and a bulky internal combustion engine, space now more compactly occupied by an electric motor and a set of batteries. Plenty of room then for a hefty 338-litre cargo area that's double the size of that offered in other small all-electric cars from this era like Peugeot's iON and Citroen's C-ZERO. More pertinently, it's also more than 20% bigger than the kind of luggage bay you'd find in a conventional Fiesta-sized supermini from this period. It's a similar story if you fold the rear bench down. Unfortunately, for some reason it doesn't 60/40 split-fold, but compensation lies in the revealed 1,225-litres of total carriage capacity, that's 265-litres more than you'd get in, say, a Ford Fiesta.

Most ZOE owners we came across were pretty satisfied, but inevitably, some issues were thrown up by our survey. Let's start with the usual things - check for minor bodywork scratches and the usual city scuffs. Most of the other issues we came across related to electrical problems like broken heaters and issues with the air conditioning. We've come across issues with the front wheel arch liners rubbing against front brake hoses which in a few instances have caused leaks. You should get a low brake fluid warning light to alert you of this issue before it becomes a problem. Your Renault dealer can tell you whether the appropriate remedial work to correct this was carried out. There were a few other recalls which we need to brief you on. Some models made between July and October in 2017 may have been fitted with the wrong accelerator pedal. And models built between July 2015 and April 2017 may have an issue with the pin the parking lever in the gearbox breaking, allowing the car to roll away. Some early ZOEs had a light coloured dashboard that reflected poorly in the windscreen: Renault retrofitted an alternative darker shaded dash part which solved this problem. Find out whether the previous owner bought themselves a regular 13 amp charging cable for use with a 3-pin plug - Renault didn't supply these from new and this lead is really useful to have, even though charging using it takes ages.

(approx based on a 2016 ZOE ex VAT) Day to day consumables for the ZOE are in line with what you'd expect. A wiper blade will cost around £9. Front brake pads sit in the £21 to £28 bracket for a set. Front brake discs sit in the £68 bracket. A door mirror glass is around £18.

Electric vehicles tend to promise much but deliver precious little. Here's one that's very different. If you have a place to park and charge it, cover under 90 miles a day and are sufficiently organised to remember to charge the thing, there's nothing spacious yet supermini-sized that adds up better on the balance sheet than this Renault ZOE. Yes really. Of course, not everyone buys their small car on a balance sheet basis. But even if you don't, it's almost certain that in choosing a supermini, you'll be wanting it for shorter trips most of the time. From which point, assuming you're not reliant on a single vehicle as your only source of family transport, it's hardly such a big step to decide that yours could be a short range car all of the time. In other words, yours could be an all-electric model, just like this one. Precisely this one in fact. In pure electric terms, there isn't really anything else in the supermini-sized class from the 2012-2018 era worth considering. Which in terms of competition, really leaves only the petrol/electric hybrid and frugal diesel superminis that will cost you about the same to buy but when all's said and done, will set you back far more to run. The ZOE feels as if it was designed to excel at city and suburban driving and it does exactly that. Relaxing and refreshingly clever, it doesn't promise anything it can't deliver - and the look and feel it offers is arguably more special than some cars costing twice as much. We'd suggest that you limited you perusals to the post-2015-era Z.E. 40 40kWh model with its greater range. And if you can, you'll find much to like here. 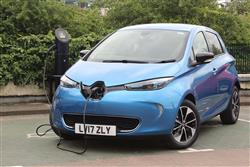 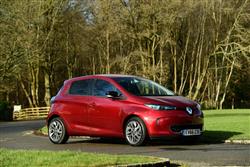 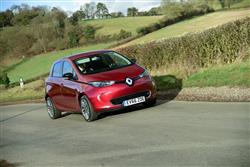 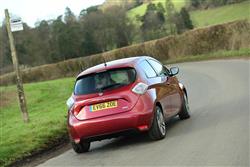 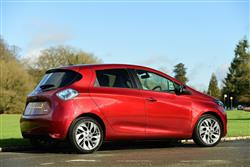 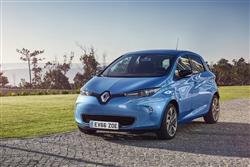