Large MPVs come and go, but the benchmarks for the class remains the SEAT Alhambra, Ford Galaxy and Volkswagen Sharan trio. Built from a shared source they have dominated the MPV division and of the three the Sharan is probably the best value. It wasn't until the launch of the second generation car in 2000 that the Spanish company really had an offering with its own distinct personality. As a used buy it makes a lot of sense, but you may have to prise the keys out of the previous keeper's grasp.

If it's history you're after, you've come to the right place. It's said a fortress existed on the site of the modern day Alhambra near Granada since the 9th Century although it wasn't until the 12th century and the arrival of the Nasrites that the Alhambra became a palace of kings. The name Alhambra comes from an Arabic root which means "red or crimson castle", perhaps due to the hue of the towers and walls that surround the entire hill of La Sabica which by starlight is silver but by sunlight is transformed into gold. Fast forward a few hundred years and we arrive in 1996 when SEAT launched their version of the Alhambra. Although not featuring ornate frescoes nor fountains it did put SEAT on the firmly MPV map via a joint collaboration with Volkswagen and Ford. The second generation Alhambra range arrived in Britain in Summer 2000. This featured a 115bhp turbo diesel engine and a V6 petrol option was also offered. With sleeker, more confident styling, the Alhambra had become more than a car for those who wanted a Ford Galaxy or a VW Sharan but couldn't afford one. It was well worth having in its own right. With a six-speed transmission on manual models the Alhambra is still probably the smartest buy amongst large MPVs. Summer 2003 saw the addition of a 130bhp TDI Alhambra, offered only in SE guise. Towards the end of 2005, the 130bhp 1.9-litre TDi engine was replaced by a more modern 140bhp 2.0-litre TDI unit, although prices remained unchanged. The 2.8-litre V6 engine had been discontinued by this stage.

Inside, the rather plasticky feel of the original model has been replaced by a more up-market atmosphere, with better quality plastics, a new steering wheel and nicer switchgear that leaves room for the obligatory optional satellite navigation system. More practical improvements include retractable cupholders, extra map pockets in the doors and a pair of useful lidded cubbyholes on top of the dash. This plusher atmosphere is important, for cheap and cheerful MPV customers are increasingly opting for mini-MPVs like Renault's Scenic. Large models like the Alhambra must increasingly compete with executive cars. All models get air conditioning, ABS, twin front airbags, remote control central locking and electric front windows. Plusher versions get side airbags, combination leather/alcantara upholstery and electronic climate control that you can operate front and rear. There are also options like ESP (an Electronic Stability Programme that will automatically apply the brakes and reduce the throttle to get you out of trouble if you enter a corner too fast) or, more practically, a fridge. Unlike some boxier rivals, the Alhambra will only offer seven, rather than eight seats. As an MPV buyer, you'll be looking for flexibility as well as sheer space. So you'll find, as before, that all of the seats can be folded down or unclipped and removed completely. In fact, the only difference this time round is that the removable chairs themselves have been redesigned, so should feel a lot more comfortable. Sadly, they're no lighter, so lugging them in and out remains a job not to be undertaken by the weak or faint-hearted. The two front seats on some models can be swivelled round completely to face the rear - which is great for picnics and business meetings if you're stationary and there's only four in the car. It's annoying however, that you still can't do the same with the middle set so that occupants behind the driver can face each other and talk on longer journeys.

Check for faulty trim and excessive transmission noise caused by the specially lengthened gear linkages. On the popular 2.0-litre, listen for clattery camshafts and make sure the drive-belt has been replaced on schedule. Bear in mind too that most Alhambras will have been used by people not used to cars of this size. It's worth checking therefore for body scrapes and scuffed mirrors. Finally, check the condition of the rear seats; their frames may have been damaged by ill-judged removal attempts.

On the road, you have a car that not only costs around the same as a mid-range family estate but also measures in at about the same length, taking up no more space on the tarmac. Behind the wheel, it's exactly like a medium range estate - only better, thanks to that high-seated driving position and the glassy cabin. The biggest surprises, however, are reserved for the handling. This MPV doesn't roll, pitch or wallow like many of its rivals. Nor do you need a period of acclimatisation before you can drive it quickly, as you would, for example, with a fashionable four-wheel drive.

SEAT has for quite some time been the recipient of quite a bit of smart money form UK consumers and the Alhambra is no exception. Arguably better looking than either the pricier Ford Galaxy or the Volkswagen Sharan, it makes a great used buy. The pick of the bunch is probably the turbo diesel, but the 2.8-litre petrol is a blast as long as you don't mind spending money on fuel bills. 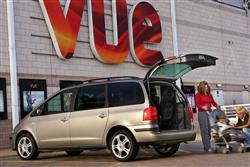 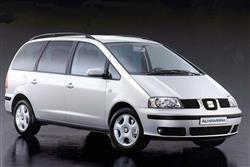 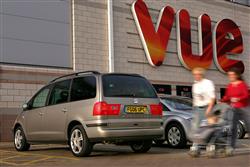 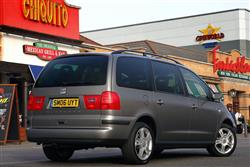 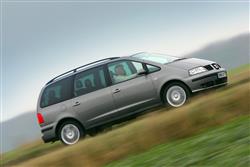 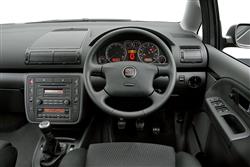