If you're going to pitch into one of the most closely fought sectors in the market, you'd better have something very impressive to offer if you're going to stand any chance of success. SEAT offered exactly that in the form of this Ateca model, launched in 2016, a car that became a very significant player in the segment for Qashqai-class family-sized mid-sized Crossovers and SUVs. There's certainly plenty here to tempt buyers away from the established class leaders. But does it stack up as a used car?

The SEAT Ateca was the Spanish maker's first proper venture into the hugely significant sector for compact little SUV-like Crossovers. With this car, the Spanish marque came from nowhere to deliver what turned out to be one of the most credible family-sized Crossovers from the 2016-2020 era in the Qashqai-class segment. As you'd think it might be, given underpinnings and technology based on that of a Volkswagen Tiguan costing thousands more. To merely dismiss the Ateca as an 'Iberian Tiguan' though, is neither fair or entirely accurate. For a start, it's slightly smaller and lighter than that car and most variants have much less sophisticated suspension to go with an engine range more focused on lower-powered options. But then, that's what a lot of buyers in this segment want. SEAT hopes these people will like this Ateca's cutting edge connectivity, its efficient running costs and its youthfully conservative looks. But the company is also well aware that this segment is over-stuffed with recently-announced rivals promising potential buyers just the same portfolio of virtues. So what's different here? In a word - drive dynamics. The Ateca set a new standard here. A 1.6 TDI diesel engine arrived shortly after launch. And in 2018, a 2.0 TSI 3000PS CUPRA Ateca performance variant arrived to top the range. The line-up was facelifted in Spring 2020, but it's the original models we look at here.

This car's designer, Alejandro Mesonero-Romanos, says that this Ateca 'is a car that could only have been created in Barcelona'. Well perhaps, but what's important is that SEAT's first ever SUV was a decently good looking thing, confident in proportions that, almost down to the millimetre, replicated those of this model's arch-rival, Nissan's Qashqai: that surely wasn't a coincidence. The way the whole thing was packaged though, was of course quite different, especially at the front where a large, high-set grille, sharply-defined lights and substantial air intakes nicely set off the broad, muscular stance. Inside it's, well, basically a SEAT Leon with a better view out. It would have been nice perhaps, if the Spaniards had been able to give this cabin more of a unique and more fashionable feel, in the way that some rivals from this period do. With a base-spec trim level, it can all seem rather plain inside. But that said, there's not a lot wrong with the Leon layout and you'll certainly enjoy the better all-round visibility that comes with this Ateca's slightly higher perch. The rear doors are a good size and open wide enough to make access easy. Once inside at the back, you'll find another thing that might sell you this car over a competing Nissan Qashqai - slightly better standards of rear seat room. In truth, there isn't really any more space here than you'd get in SEAT's Leon hatch, but the high roofline certainly makes it feel more spacious and the way it's all been packaged gives the impression that you could take three adults here if need be, something that would be quite a squash in that rival Nissan. Out back, there's a decently-sized 510-litre boot that's a full 80-litres bigger than that of the rival Qashqai and can be extended to as much as 1,604-litres if you push forward the split-folding rear seatbacks.

You wouldn't expect a compact Crossover of this kind to be very good to drive, but as you'll discover when you hit a few twisty roads in this Ateca, a pleasant surprise is in store with this one. Drive at seven or eight tenths and there's pretty much no difference between the dynamic responses you get from this SEAT and those of the Leon hatchback it's based upon. Only when you really push on do you realise the limitations of this model's high stance and the relatively basic torsion beam suspension system that comes fitted to most models. Ultimately, it's all proof that lighter weight, a simpler stiffer chassis and feelsome electric power steering can be enough, in the hands of the right engineers, to create a confident and engaging package. The engines help too, the mainstream range built around 1.0-litre and 1.4-litre TSI petrol units and 1.6 and 2.0-litre TDI diesels. All are pretty frugal, with the 1.6-litre TDI capable of 65.7mpg on the combined cycle and 113g/km (both NEDC figures). You'll need a 2.0-litre powerplant if you want the option of '4Drive' 4x4 traction, a 'on-demand' Haldex system that brings the rear wheels into play if a lack of traction demands it. All well and good but you don't buy a compact Crossover for its off road prowess. In fact, until this Ateca came along, you wouldn't have brought one for its on-road prowess either. This SEAT changed things in that regard, with a degree of driver involvement you can control via the 'Drive Profile' vehicle dynamics system that comes fitted to most variants and can alter steering and throttle feel to suit the way you want to drive. At the top of the range was the CUPRA Ateca, which only came with DSG auto transmission, 4Drive AWD and a 300PS 2.0 TSI petrol turbo engine.

Privately, SEAT were frustrated by the Volkswagen Group's tardiness in developing many products for the compact Crossover segment. But Wolfsburg's Spanish outpost must also be grateful to its German masters for the thoroughness with which they corrected this oversight. This provided a standard of technology and design that enabled SEAT to create in this Ateca one of the very finest cars of its kind. It set a fresh standard for the way that contenders in the Qashqai-class could drive, at a stroke making most rivals seem dull and lifeless in their dynamics. More perhaps than any other model SEAT made in this period, this one actually delivered on its brand promises of a more interesting and involving drive. Plus it helped enormously that this car was also well priced, good looking and, for the most part, pretty well equipped. In short, there's plenty to like here. It may have had a bit of a siesta before joining the class, but this SEAT proved to be more than worth the wait. 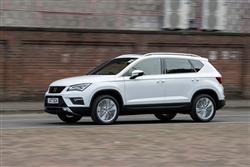 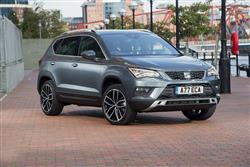 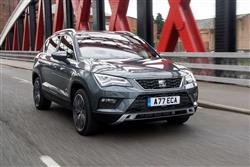 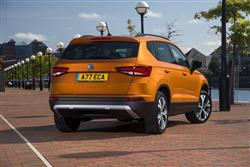 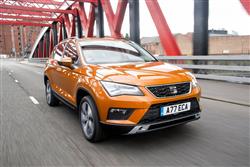 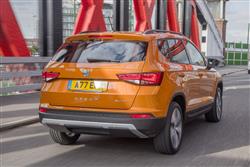