SEAT's fifth generation Ibiza supermini, launched in 2017, proved to be the most credible small car the Spanish brand had ever offered, more sophisticated underpinnings making possible a more spacious cabin and a more dynamic driving experience. If you're shopping in this segment for a supermini from this period, it's a contender you simply have to try. Here, we look at the pre-facelift 2017-2021-era versions.

When any brand sets out to create what in its own words should be 'the best small car in Europe', you know it's serious in its aspirations. And SEAT was with this fifth generation Ibiza supermini. For long term profitability, it was one of the models the Barcelona brand simply had to get right, a car that needed to be beautifully engineered but also deliver a little extra Iberian sparkle. The 'Sociedad Espanola de Automoviles de Turismo' - or 'SEAT' as we better know it - is well used to injecting a little life into the mainstream market. Its 600 model, launched in 1957, is the fun little runabout credited with putting Spain on wheels, over a million being sold to bronzed Spaniards in just eleven years. Only when Volkswagen took control of the brand in 1986 though, did its appeal start to spread to the rest of Europe, with the Ibiza consistently the sales spearhead throughout over thirty years of production at the Spanish Martorell plant. By 2017, it was one of the three models that made up the so-called 'pillars' of the company's line-up, the others being the Leon family hatch and the Leon-based Ateca mid-sized SUV. This Ibiza formed the basis for an SUV too, an Arona model that aimed to do for SEAT in the Juke and Captur Crossover sector what the Ateca was delivering for the company in the larger 'Qashqai' class. This '6F/KJ1'-series car wasn't launched until 2017 because the brand wanted to wait for the availability of the Volkswagen Group's all-new MQB A0 platform, the chassis also used to underpin one of this model's closest rivals, the sixth generation Volkswagen Polo. This Ibiza shared Polo power too, the range primarily built around a sophisticated 1.0-litre TSI three cylinder petrol engine, with able support from a 1.5-litre TSI EVO unit for those in search of an extra dash of Latin spirit. With this fifth generation Ibiza, buyers also got sharper styling, a more spacious cabin, stronger standards of safety and very class-competitive media connectivity. Everything needed in fact, to push this car right back into contention in the supermini segment. An updated version of this MK5 model made its debut in the early Summer of 2021.

How do you make a small car bigger without making it.. well, bigger? SEAT's then Design Chief Alejandro Mesonera and his team here gave us a masterclass in delivering just that, aided in no small measure by the sophisticated MQB A0 chassis this fifth generation Ibiza sits upon, this MK5 model only offered in 5-door hatch form. This platform pushes the wheels right out to the corners of the car and as a result, gains of around 95mm in both overall width and wheelbase length make this a much more spaciously practical supermini than its predecessor, despite the fact that the overall length here was pretty much unchanged. At the same time, this MK5 model evolved into a very good looking small car indeed, thanks to an almost obsessive attention to proportion and detail from the Spanish designers. And up-front? Well this is an area of this car into which a huge amount of design budget was poured, a wise choice on the Spanish brand's part. SEAT made sure that all the controls and instruments were set as high as possible, though that directive appears to have been ignored in terms of the lowly siting of the ventilation dials in front of the gearstick. Lower-spec models get a humble 5-inch 'Media System Touch' infotainment set-up, but further up the range you can get the far superior 8-inch 'Media System Plus' package. It comes with 3D Navigation, voice recognition, a DAB audio system with a couple of extra speakers and the Spanish brand's 'Full Link' smartphone-mirroring technology that connects your handset into the centre-dash screen via either 'Apple CarPlay' or the 'Mirrorlink'/'Android Auto' systems. And in the rear? Well despite the fact that this fifth generation model is actually 2mm shorter than its predecessor, access is quite acceptable by supermini standards. And once inside, the benefits of that extra body width and longer wheelbase will be immediately obvious, not only to owners of the old MK4 Ibiza but also, we'd argue, to those familiar with most other rival products in the supermini segment. It's certainly impressive that a car measuring in at only a fraction over 4-metres in length can allow a six-foot adult to sit comfortably behind a driver or front seat passenger of similar stature. Try doing that in a Fiesta. Finally, let's consider luggage space out back. Remember we were talking about a Focus-class feel on the back seat? Well that's even more evident here. Press in the large SEAT logo that doubles as a boot release and the rear hatch opens to reveal 355-litres of luggage space, 63-litres more than the previous generation model could offer.

We came across quite a few very satisfied Ibiza owners but inevitably, there were a number of issues. SEAT has a reputation for thin paintwork, so look out for stone chips on the body. Otherwise, it's the usual things with superminis - signs of child damage in the interior, car park exterior dents and scuffs and alloy wheel scratches. There are some product recalls for this MK5 model you need to be aware of - an issue with the seat belt buckle releasing the seatbelt - and an issue with handbrake adjustment - both applicable to 2017-2018 models; check that this has been attended to if it applies. Otherwise, just, a usual, insist on a fully stamped-up service history.

On the move in this Ibiza, SEAT hopes one of the first things you'll notice is this model's 'big car' feel, something particularly evident in its rigid, rattle-free roadgoing demeanour. In part, this comes courtesy of the 30% improvement in torsional stiffness made possible by this MK5 model's more sophisticated MQB A0 chassis. That in turn means flat cornering and benefits ride quality that's un-bettered in this class from this period. We're slightly less sure about SEAT's decision to extend that same 'big car' feel to the steering which, as a consequence, is a tough lighter than some really enthusiastic drivers might like. The good news though, is that you still get enough feedback through your fingertips to keep you well informed on how well the front tyres are gripping on faster, twistier roads. Bottom line? If you'd ideally want a supermini with the spaciousness of a Skoda Fabia or a Honda Jazz from this period and would like the sharp handling of a Fiesta and the supple ride of a Volkswagen Polo, you'll get closer to it with this SEAT than with any other class contender we can think of. None of which would be much use if the engines were to let the side down. Fortunately, that's not the case. We can't really see why you'd choose either of the powerplants carried over from the previous generation Ibiza line-up, a 1.6-litre TDI diesel and a rather wheezy normally aspirated entry-level 1.0-litre MPI petrol unit. But the 1.0 TSI turbo petrol variant - the one the vast majority of buyers will choose - is very good indeed. This three cylinder powerplant is primarily offered in 95PS guise, but there's also a 115PS variant if you want the option of DSG auto transmission. Either way, 60.1mpg is possible on the combined cycle and around 106g/km of CO2 (both NEDC figures). Also very frugal is the pokiest option in the line-up, a 150PS four cylinder 1.5 TSI EVO unit which features cylinder deactivation technology.

Ibiza's important to Spain - and this one certainly is to SEAT. This car is something of an Iberian success story. Are there issues? Well it's hard to find too many. As we've suggested, there are cheaper contenders in this class from the 2017-2021 period, so if you don't care about handling dynamics, you might be tempted to look elsewhere for that reason. If, on the other hand, you do like your driving (and come to this car from a rival Fiesta), you might notice that the steering of this SEAT lacks just a touch of the involving feel that marks out that impressive Ford - but to be honest, there's not much in it. Otherwise, there's lots to like, the attributes we've already mentioned further built upon by sharp styling and the low running costs possible from the 1.0-litre engines that the vast majority of customers will choose. In summary, we're looking here at a car that, like its brand, has matured nicely. One mindful of the fact that modernday Spaniards need to balance Latin spirit with sober sense. In this Ibiza, they've a small car that does exactly that. 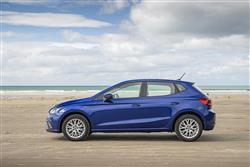 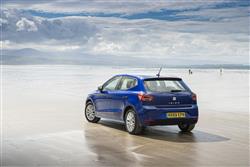 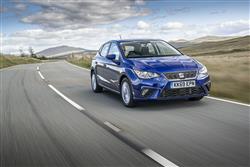 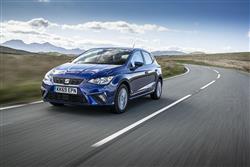 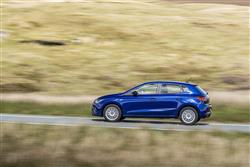 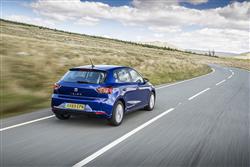