Skoda's first stab at citycar motoring proved to be an impressive one, this Citigo borrowing Volkswagen technology and blending it with the value we expect from this growing Czech brand. This post-2017-era version of this design added a bit of extra polish to this impressive package and as a result, those in search of a beautifully conceived, affordable and impressively space and fuel-efficient urban runabout have even more reasons to consider it.

What should a Citycar be? Clever? Affordable? Space efficient? Cheap to run? Skoda's little Citigo ticked all these boxes, but as a used car, it's up against an army of equally competitive rivals and needs to set itself apart. The post-2017-era revised first generation version of this model aimed to do just that. This, as you may well already know, is Skoda's version of the little city runabout also sold as a Volkswagen up! and a SEAT Mii. Like those models, it was originally launched back in 2012 and was Skoda's first ever entrant in this, the market's most affordable segment. By 2017, over 200,000 Citigos had been sold, aided by pricing which made this Bratislava-built contender a touch cheaper that its two design stablemates. That affordable pricing was key to this car's success but originally, it was very nearly far more expensive, the early prototype being a radical rear-engined, rear-driven design that promised impressive space-efficiency but would have been pricey to produce. A last minute switch to the more conventional front-engined, front-wheel drive hatch that the Citigo was in 2017 ensured that this Skoda could compete on equal terms with the Korean value brands and rivals built with cheap labour in emerging markets - city cars from this era like Suzuki's Celerio and Ford's KA+. To help this Czech contender take on all these competitors as well as improved versions of its Volkswagen and SEAT design stablemates, Skoda facelifted the Citigo range in the Spring of 2017. The changes were small, but quite significant, a smartening of the front and rear styling accompanied by improvements to both media connectivity and safety provision. The combustion engine versions of this model ended production at the end of 2019, to be replaced by an all-electric Citigo e iV battery-powered variant, which only stayed on sale until the Autumn of 2020, when the Citigo left Skoda's price lists entirely.

It's perhaps a touch ironic that of the three models produced from the Volkswagen Group single citycar design (the others are the VW up! and the SEAT Mii), it's this Skoda, the most affordable, that looks arguably the most mature and up-market. Under the skin of course, it's identical to its Volkswagen and SEAT stablemates but within this conformity, designer Jozef Kaban (the man who styled the Bugatti Veyron) still managed to create a subtly different end result, one that was subtly updated in 2017 as part of the facelift changes made to the three and five-door models in the updated Citigo line-up. You'd have to know the car pretty well to pick these improvements out at first glance, but if you do, you'll notice this restyled bonnet which in updated form has a so-called 'powerdome' design that brought a central bonnet bulge. That flows into a restyled chrome-bordered grille flanked by sleeker headlamps that on most variants feature twinkling LED daytime running lights. Behind the wheel, probably the key change to this revised model lay in its redesigned range of infotainment systems. Provided you avoid entry-level trim, you get a 'Swing' radio set-up with a 5.0-inch display. As for connectivity, well previously, Citigo buyers were offered a Garmin-developed removable touchscreen that clipped into place on top of the dash and could be taken with you when you left the car. With the facelift range, that was done away with in favour of a smartphone docking attachment that sits above the central dashboard module and can accommodate handsets with screen sizes of up to 5.5-inches. The 'phone screen can then effectively function as a dashboard infotainment display - or at least it will do if you take up Skoda's offer of downloading the compatible 'Move&Fun' app that's been developed for the 'Swing' system. This integrates your smartphone seamlessly into the car's trip computer and infotainment system, letting you receive DAB digital radio, use offline navigation maps, listen to music stored on your smartphone and view basic driving data. In the rear, you're treated to far more interior space than you'd expect the modest external dimensions would be able to provide. There are though, a couple of irritations: first that you don't get proper side windows - just glass panes you can angle out for extra ventilation. Secondly, there's no opportunity to take a third centrally-seated passenger, as you might want to if, say, you were transporting three small children. To be fair, a number of other rivals share these issues. Otherwise, this area of the car is a triumph of space-efficient design. Open the glass tailgate (apparently styled to look like a flat-screen TV) and as long as you can lump your stuff over the rather high sill, you'll find 251-litres of space. That's only a fraction less than you'd get in, say, a Ford Fiesta supermini from the next class up.

In our ownership survey, we struggled to find anyone who didn't like their Citigo - one with a manual gearbox anyway. There was quite a bit of grumbling from those who'd opted for a variant fitted with the optional ASG automatic gearbox. One owner complained that his Citigo ASG refused o move out of 2nd gear going up hills. Another found instances where the gearbox refused to engage its ratios at all. We'd avoid the ASG option unless you really are urban-bound and have thoroughly tested the car in question. Amongst manual model Citigos, it's just necessary to look out for the usual citycar issues - kerbed alloys and evidence of damage from unruly children on the interior plastics. We came across a few complaints about Bluetooth 'phone streaming as well, so you might want to check that out too.

No significant changes were made to the Citigo's roadgoing experience as part of the 2017 facelift, so in this form it still used the same 1.0-litre petrol engine as before, a three cylinder normally aspirated powerplant offered with either 60 or 75PS. For most buyers, the unit in question will be mated to manual five-speed manual transmission, but Skoda also offered a clutch-less 'ASG' version of this same gearbox for urban-based owners. As you'd expect, frugality is pretty much guaranteed, the 60PS manual model managing a combined fuel economy figure of 64.2mpg, with emissions pegged at 101g/km (both NEDC figures). In the city, you'll notice that the ride's very supple for a car this small, plus you'll appreciate the light, responsive power steering. It also helps that forward visibility is excellent thanks to thin front A-pillars and tall side windows. In addition, the Citigo's relatively square shape means you can easily judge where the corners are, so parking's very easy. As for this little Skoda's suitability when pressing on around secondary roads, well yes, there are better drivers' choices in this segment, cars that roll a touch less and feature more feelsome steering. With that said though, it's also true that this design's wide track and long wheelbase pay dividends here, delivering good stability, predictable handling and plenty of grip. All the above comments relate to the petrol model. The Citigo e iV electric model sold briefly in the 2019-2020 period had a 61kW electric powerplant with 212Nm of torque, which hurls you away from rest in a manner you'll need to adjust to if your previous experience of Citigo motoring was with a 1.0-litre petrol engine. You'll get used to driving with one eye on the Charge Indicator, a dial to the left of the main speedometer in the instrument cluster. This shows when energy is being recuperated to charge the battery (in its lower blue zone) and when you're driving efficiently (when the needle is in the mid green zone). The battery level indicator is to the right of the speedometer, where the fuel gauge would normally be. Skoda talks of a WLTP driving range when fully charged up of between 140-170 miles.

Some citycars sell on cute and cuddly virtues. This isn't one of them - and it's at its best in this later facelifted 2017-2020-era guise. Here instead, the urban runabout grew up, become mature, got itself properly sorted. If that puts off the twentysomethings who'd prefer something more fashionable, then so be it. There are plenty of others in search of an urban runabout with big car virtues and small car pricing, spacious, efficient and beautifully built. True, there are feistier small runabouts from the 2017-2020 era that you could consider in this segment: maybe more charismatic ones too. But none that better deliver on the promise of two words that sum this Citigo up. Simply clever. 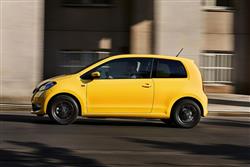 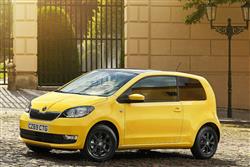 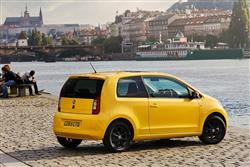 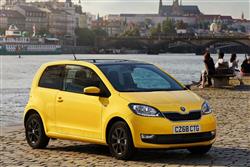