By the time the second generation Skoda Fabia arrived on the scene, the joke wasn't funny anymore. Skoda had successfully completed its transformation from Eastern block launching stock to serious mainstream manufacturer - shortening the stand-up routines of some journeyman comedians by up to ten minutes. You might think that this rejuvenation under Volkswagen Group stewardship meant it was all plain sailing for Skoda. Not a bit of it. The brand's new found equality meant that the Fabia couldn't merely be good 'for a Skoda'. It needed to be good full stop. With a whole cluster of superminis bidding for the public's attention, the hard work was just beginning.

With strangers no longer inclined to wrinkle their noses in derision as Skoda owners revealed what they had lurking in the car park, Skoda needed to find a voice for itself that said something more than "we used to be rubbish but now we're surprisingly competent". The Fabia was one of the first cars that this onus fell upon and it showed Skoda pursuing a more individual styling direction while attempting to carve a place in the market based on simple quality and value. The car launched in May 2007 with a fully-developed engine and trim level range. The engines were predominantly the less exciting units from the Volkswagen Group warehouse chosen predominantly to keep asking prices and running costs down. The trim level structure set out to eliminate any possible scope for customer confusion, the entry level car called Fabia 1, the range-topper badged Fabia 3 and the name of the popular mid-range version well within the guessing capacity of most punters. The Fabia was launched exclusively in the five-door hatchback bodystyle but an Estate version showed up late in 2007 offering extra practicality. Further developments saw the Sport models added a few months later with their styling accessories bringing a little more excitement to the car's looks and the economy-focused GreenLine models show up in Spring 2008. A little later, the Fabia Estate range was enhanced by a Scout version which has mild styling tweaks designed to make it look a bit rugged and 4x4-like.

The Fabia is a nice enough car to look at and its blacked out pillars even serve to differentiate it from other superminis - with the exception of the MINI and Suzuki Swift of this era which employ the same stylistic device. Although it's small in the grand scheme of things, the Fabia is quite a size by supermini standards. Skoda claimed more rear knee and headroom than any rival at the time of launch, helped by the fact that this Fabia is 22mm longer and 47mm taller than the model it replaced. Boot capacity stands at an impressive 300 litres with the seats in place or a massive 1,163 litres when they're folded. In the Estate, the extended dimensions have helped Skoda engineers achieve a 480-litre boot capacity with the seats up. Fold the 60/40 split rear seats flat (a less than straightforward operation that involves removing the headrests) and there's an Albert Hall-esque 1,460 litres. That's 297 litres up on the hatchback. The Fabia definitely has space on its side but the interior itself is less impressive. We're not talking from a build quality standpoint here as the fascia and the whole of the interior generally seems soildly screwed together. The problem is the materials themselves with the Fabia employing a plethora of uninviting hard plastics that do little for the ambience. They're likely to wear well but a little more quality in the materials could have brought the best out of what is an attractive and functional design. Equipment levels were not a strong point of the old Fabia, that car relying instead on solid no-nonsense build quality. This time round, there were items like electronically-controlled Climatronic air-conditioning and an MP3/iPod compatible stereo but if you're expecting to be granted a view of the state-of-the-art in small car electronics, you're likely to be disappointed. Unimpeachable build quality, on the other hand, you can take for granted.

The Fabia outwardly appears to be a sturdy piece of fit and that impression shouldn't be tarnished too much by the ownership experience. The engines are simple, proven units, if a little on the elderly side in many cases. Complaints include those relating to leaks around the A pillars on early cars, which were addressed by a modified exterior cover, and vibrations in the cabin that can develop over time. Keep a look out for those and you should be OK. With the exception of the 1.2-litre 3-cyliner engines which have a chain cam, all of the Fabia's powerplants need a timing belt and tensioner change every 4 years or 60,000 miles.

(Estimated prices, based on a 2007 Fabia 1.6) Fabia parts aren't particularly cheap. An alternator is a big ticket item at around £400, while a clutch assembly is around £200. Front brake pads are a reassuring £40 a pair, whilst somebody must have employed a pre-VW Skoda accountant when radiators were priced at £90. A starter motor is around £135, whilst a replacement headlamp is just over £100.

Whilst the previous generation Fabia was never really focused on keen drivers, it remained a very civilised steer. This model used many of the same engines with improvements to others. With four petrol units and three diesels available, there's no shortage of choice. The petrol range kicks off with the three-cylinder 1.2-litre HTP engine, developing 60bhp. The next step up is the 70bhp 1.2HTP 12v, followed by the 85bhp 1.4 16v. A 1.6-litre 16v engine was also offered with an optional six-speed Tiptronic automatic gearbox option. The trio of diesel engines starts with two 1.4-litre TDI units in either 70 or 80bhp guises with a 1.9-litre TDI that's good for 105bhp at the top of the range. If you want the 80bhp 1.4 TDI, you may be able to find a Fabia hatch or Estate in ecologically-friendly 'GreenLine' guise which reduces emissions to just 109g/km and improves fuel economy on the combined cycle by nearly 8mpg to 69mpg. The Skoda Fabia probably isn't a natural choice for long distance journeys but it gets by reasonably well on the motorway. The gearbox is unobtrusive, while the diesels and larger petrol engines have plenty of guts for maintaining a steady speed up inclines. The Fabia doesn't blot out the sound of its engines as well as some other superminis but it rides smoothly and a long periods spent at the wheel are far from uncomfortable. If motorway munching accounts for the major part of your driving, a larger car than the Fabia may be a good idea but the advantage of the Fabia's compact size is that it can also turn its hand to low speed work quite effectively. It responds smartly to steering inputs and stays nice and flat in corners.

By the time this second generation Fabia was launched, Skoda had earned the right to be judged as an equal to the leading mainstream brands. This was a double-edged sword, however, with the Fabia representing a major step forward over its predecessor but lacking in polish when compared to class acts like Ford's Fiesta, Vauxhall's Corsa or even the Volkswagen Polo which was based on the same mechanicals. Competitive pricing gave the Skoda a fighting chance but some of the engines let the side down and equipment levels aren't stellar. On the used market, the Fabia's tough build, space and simplicity make it a sensible option, if not a particularly thrilling one. 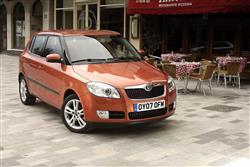 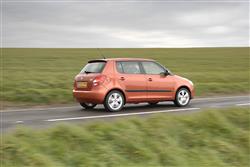 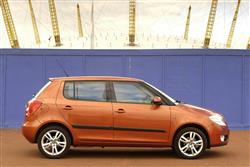 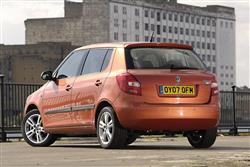 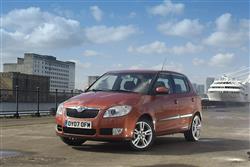 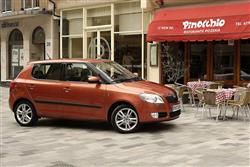