SsangYong's Korando is a strong choice if you're looking for a used 4x4 in the Crossover or small SUV class offering proper diesel towing power and decent off roading prowess for a very affordable price. If you like the idea of a Korando, it makes sense to stretch to one of the post-2015 models that featured the brand's uprated 2.2-litre Euro6 diesel engine, a unit that provided more power and lower running costs and which could be paired with a smooth 6-speed Aisin automatic gearbox. It makes this car well worth a look.

SsangYong's Korando offers an awful lot for the money and always has ever since the modern-era version first arrived here back in 2011 complete with slick Italian Giugiaro styling and a powerful purpose-designed 2.0-litre diesel engine. This was the first SsangYong design to swap a heavy duty ladder-framed chassis for more car-like monocoque underpinnings in pursuit of a sensible school run ride and more rewarding handling. All along with a high specification and pricing that made opposition models look needlessly expensive. In the years following the original launch, the Korean brand worked on almost every key aspect of this model's design, smartening the styling for the 2014 model year and updating the engine to 2.2-litre Euro6 status at the end of 2015 for the 2016 model year. It's early versions of that 2.2-litre model that we're going to look at here as a potential used car buy. The model we're going to look at here was superseded in the Spring of 2017 by a further facelift that took this design through to the end of its production life. What You Pay

This modern era Korando wasn't only the first SsangYong to feature more car-like monocoque underpinnings. It was also the first one with styling you'd really be quite pleased to see on your driveway. For this, the South Koreans had 'Il Maestro', Giorgetto Giugiaro to thank, a man known as one of the great automotive stylists of his generation and responsible for designs as diverse and enduring and the DeLorean and the Fiat Panda. In the clean, sculpted look of the original version of this car, there was certainly evidence of the master's deft touch and this later model doesn't deviate too far from that, simply modernising the look with clear glass direction indicators flanking a smarter piano black radiator grille that features additional chrome detailing on the top ELX variant. SsangYong hoped it would be enough to create a sharper, more contemporary look. Get up close and personal and you'll notice the squat stance, beefy wheel arch bulges and sharply rising belt line carrying through to a smart tailgate that also features LED lighting. Lifting it reveals 486-litres, which is usefully more than you'd get in a Nissan Qashqai or Hyundai ix35 from this era. If you need more, then pushing forward the 60/40 split-folding rear bench reveals 1,312-litres. Take a seat at the wheel and you'll find yourself in a reasonably smart interior with sharp, angular styling quite reminiscent of the far pricier Hyundai Santa Fe, which is no bad thing. SsangYong also took note of the way its Korean competitor brands were better using aluminium-look trim and soft-touch plastics and the result, providing you can overlook the artificial wood trim, is a far more inviting cabin than that of the original model. You might not think you were in a much more expensive Sportage or a Qashqai but it's certainly a world away from the Bulgarian thrift store feeling you get sat in a Dacia Duster, the only other car in this segment able to approach this Korando's asking price. Storage is reasonably ample with a practically-sized central cubby and decently shaped side door pockets. With this post-2016 model, the major interior change centred around upgraded infotainment technology. Provided you avoid entry-level trim, that means a centre dash dominated by the SsangYong Entertainment System's informative 7-inch colour touchscreen via which you access the usual stereo and 'phone functions. There's a link to a rear view camera, plus you get audio streaming functionality from smart devices, along with a USB memory slot, an Aux-in port and an HDMI port. Go for the top ELX version and a Tom Tom sat nav is also built into the same set-up. Getting comfortable at the wheel isn't a problem thanks to a height-adjustable driver's seat and a reach and rake-adjustable steering wheel. Plus, thank goodness, there's a proper conventional handbrake, rather than one of those fiddly electric button ones. The build quality feels reasonable and though there are still a few more hard plastics than you'll find on many more city-orientated rivals, these do feel better suited to a tough and durable life. Whatever your feeling is on that, you certainly can't argue with the amount of rear seat space on offer. This is the only car in this class (premium brand models included) able to comfortably transport three fully-sized adults on the back seat for any distance - long journeys helped by the fact that the seat backs recline, while the seats themselves are even heated on top models. Rear legroom is quite plentiful, aided for the passenger in the middle of the rear seat by the fact that, unlike many of its rivals, this car has no bulky transmission tunnel.

Korando models from this era have proven reliable, the old problems SsangYong had with vacuum pipes long since being laid to rest. The 178PS turbodiesel engine is a tough unit, but keep an eye on oil levels once a month. Look for signs of neglect from off-road excursions such as battered exhaust back boxes, broken wheel arch liners and hedge scratches on the paintwork. The interiors are also fairly indestructible but the metallic plastic finishes can quickly lose their lustre. Few problems have been reported amongst owners. A few people we came across had had transmission issues and one owner had experienced the engine light staying on during use. Other owners had experienced a few issues in terms of hesitation and unevenness in acceleration which was solved by correcting a partly sticking EGR valve.

The important change with this revised post-2015-era Korando was the installation of its larger - but somehow more frugal - 2.2-litre Euro6 diesel engine. SsangYong has a history of borrowing other people's mechanicals when it comes to under-bonnet technology but this freshly-developed e-XDi220 unit was entirely the company's own work, developing a pokey 178PS - a big step up from the previous 149PS 2.0-litre unit. This, remember, in a segment where every other affordable SUV contender from this era offers less than 120PS. You really feel the advantages of this torquier engine in terms of pulling power - particularly when it comes to things like towing. This car has a massive 400Nm of torque, which means that it can tug as much as 2.0 tonnes. That'll sell this car to many potential buyers right off the bat, whatever its other attractions. These people will probably also want the Torque-On-Demand 4x4 system fitted to the all-wheel drive variants most original buyers chose. It's one of those set-ups that is constantly able to shunt torque around to the wheel that has most grip so that power is always used efficiently. The flagship ELX version got 4WD as standard and offered original buyers the option of a 6-speed automatic gearbox, this transmission offering smoother shifts than previous SsangYong autos could deliver. It's another sign of the mature all-round package the Korando can offer.

'Korea can do'. That's apparently what the word 'Korando' means - and it seems appropriate. After all, it's hard to think of a car maker that has come so far, so quickly as SsangYong. The Korando is the most accessible model the company makes and feels even more class-competitive in this revised 2.2-litre guise. When it comes to things like pulling power, rear passenger space and sheer value for money, this Korando can take on and in many cases beat the best of its rivals from the 2016-2017 era in the Crossover and compact SUV sectors. It's better off road than many of them too. Running cost efficiency and interior quality aren't quite as good though. In summary, this SsangYong is a difficult option to ignore if you need an affordable used SUV of this kind. It can powerfully tow, will more comfortably transport five people than direct rivals can and offers up plenty of kit on a tight budget. You'll just have to get used to explaining to people what it is. And who knows, you might even end up suggesting that they try one.. 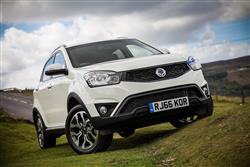 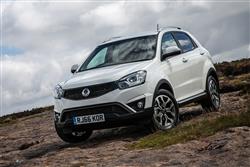 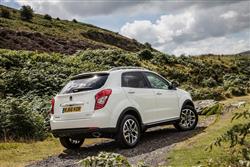 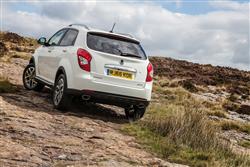 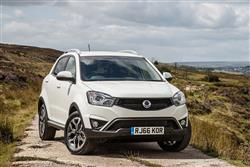 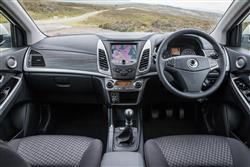