The Subaru WRX STI has always been something quite unique. Now it's being discontinued and won't be replaced. Before it finally goes though, there's this 'Final Edition' version for enthusiasts to enjoy. Jonathan Crouch reports.

The most exciting car with a roof that you can buy for under £35,000? You might well be looking at it right here. The Subaru WRX STI 'Final Edition' is a final hurrah for this iconic rally replica model line. It's a familiar recipe under the skin, with a 2.5-litre turbocharged flat-four sending 300PS to each corner. More modern rivals claim more sophistication but none of the thrills they deliver are quite the same as those you'll get at the wheel of this Subaru.

Nostalgia. There's a place for it - right? Especially when it comes to cars. And when it comes to fast, affordable excitement, there aren't many that spark it as much as this one, Subaru's WRX STI. This model isn't called an 'Impreza' any more, but it's with predecessors that were so-badged that its origins lie, cars that back in the Nineties dominated the World Rally Championship in the hands of legends like Richard Burns and Colin McRae. Subaru had to make road-going versions in order to compete at this level and found there was a ready market for them from those in search of supercar performance with an affordable pricetag. At its original launch back in 1994, this car was powered, as it is now, by a 2.5-litre turbocharged flat four - but a rather different one back then. Only with the third generation STI model of 2007 was power boosted to the 300PS output we enjoy today. In that MK3 version's lifetime, the 'Impreza' badge was dispensed with to distance the car from humbler models and an uprated 330PS power unit was also offered. Subaru decided though, that this fourth generation design didn't need it and finally re-launched the car here in 2014 as a more extreme, more involving and more affordable option to more super-hot hatches like Volkswagen Golf R and Audi's S3.

A lot has changed since the Impreza was a hero car. Back in the Nineties, 210PS would scare us stupid and have us gibbering for hours afterwards before we were sat down or sedated. These days, we have power fatigue. It takes a lot to make us sit up and take notice, but the WRX STI looks to be made of the right stuff. All-wheel drive and 300PS in a car that weighs about as much as an Audi A8's door card tends to focus the mind. Under the bonnet is the familiar 2.5 litre turbo-charged Subaru boxer four-cylinder engine, which in STI guise, produces 393Nm of torque. The six-speed manual gearbox features a short throw and a very direct shift feel. There are two driver-orientated changes to this 'Final Edition' model. The wheel size has been increased to 19 inches to house new larger Brembo brakes with yellow painted calipers, which improve fade-resistance and brake performance and a consistent pedal feel when driving on the limit. And there's been a change from mechanical and electronic to purely electronic control of the Multi-Mode Driver's Control Centre Differential (DCCD) which provides optimum cornering ability. As before, Subaru's trademark Symmetrical All-Wheel Drive employs the latest vehicle dynamics control (VDC) and Active Torque Vectoring for maximum control. Spring and damper rates have been tuned to provide a relatively compliant ride while retaining body composure and the electronic power steering is mounted on a rigid steering gearbox mount for reasonable fuel efficiency and sharp response. Drivers can use the Subaru Intelligent Drive module (SI-Drive) to switch through Intelligent, Sport, and Sport Sharp, using a rotary controller on the centre console. There's even a Multi-Mode Driver-Controlled Centre Differential (DCCD), which offers the driver six manually-adjustable modes for various traction situations. The default torque split is 41:59 front to rear. Expect 62mph to come and go in around 4.7 seconds with a top speed in the region of 155mph.

So what's different about the look of this 'Final Edition' model? Well, the front bumper has been redesigned to look more purposeful with the lower grille blacked out with a geometric textured panel, and has a larger opening to enhance cooling performance. The hexagonal grille has been sharpened and defined and a black surround has been added. The Subaru wing design which flows through to the C-shaped headlights has been incorporated, hinting at the Boxer engine under the bonnet. A Final Edition badge is positioned on the door. Inside, high gloss black inserts are added to the instrument panel, gear stick surround, door panels and steering wheel, with red stitching and red seatbelts fitted to tie the scheme together. The front seats are now heated, and a larger 5.9" multi-function display has been added to the top of the dash. The instrument panel design has also been updated. The infotainment system now includes DAB radio and a reversing camera is included to make parking easier. This last-of-the-line WRX STI is also fitted with bi-functional projector LED lights, with a single bulb enabling High Beam Assist to switch between high and low beam automatically. High Beam Assist operates via a single-lens camera, which is installed in the front windscreen and detects when an onward car is approaching. The lights are also steering responsive, turning to the left or right depending on the driver's steering input and illuminates more of the corner. Both technologies enhance visibility at night, allowing a clear view of the corners ahead.

How does £34,000 sound to you for a car with all-wheel drive and 300PS? I guess that will depend very much on your viewpoint. There will be some who would rather pay much the same for a well kitted-out Audi S3, which fronts up with 310PS and all-wheel drive - but that's a very different kind of car. Perhaps the bigger question is whether all-wheel drive rally replicas, with their old-school emissions and economy figures, have had their day. Subaru evidently thinks that they have. While you ponder that question, here's what you get for your money. There the trademark big rear wing, with a diffuser integrated bumper and twin dual mufflers. The 19-inch alloy wheels are good looking and are lighter and more rigid than those seen in the previous generation STI. Full LED lighting is employed for the headlights, tail and brake lights, while 'STI' badges are found on the front grille and wings.

There's no real getting around the fact that if you want one of the most exciting cars on the road, you're going to have to pay for the privilege. You won't be expecting this WRX STi to be a cheap car to run and it isn't. The kind of efficient direct injection and variable-geometry turbo technology that rivals offer still doesn't seem to be figuring on Subaru's radar and though the brand talks of tweaks made to the ECU, a more effective larger intercooler and EU6-compatibility, all this doesn't seem to have added up to very much in terms of a discernible improvement over what went before. As a result, even if you burble along with the car obediently set in the 'SI-Drive' system's most efficient 'I' or 'Intelligent' mode, the quoted combined cycle fuel figure is still only 27.2mpg. And as usual with this kind of car, if you get anywhere near even that on a regular basis, then you probably shouldn't have bought the thing in the first place. Emissions are pegged right up at 242g/km.

The German brands think they've plagiarised the formula that for so long has made this car so special. True enough, if you're in search of something relatively affordable with 300PS, turbo power and four wheel drive, there'll be easier, more accessible options for you than the one Subaru provides here. Don't expect them to give you a unique experience though. Don't expect a car than in standard production form is capable of shattering the Isle of Man TT road course record. Don't expect a Subaru WRX STi. Get beyond the surface irritations and for the real enthusiast, there's an addiction here that's hard to resist. The rush of the turbo when it comes on song. The way the wheel writhes in your hands as you stamp on the brake pedal and throw the car into a bend. The astonishing traction that pins you to the road surface like an unseen hand. For the WRX faithful, it'll all be quite magical. If you're among their number and think the best and fastest modern hot hatches are just that bit too civilised and boring, well, you know what to do. 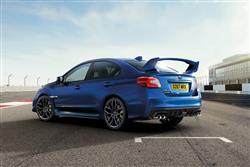 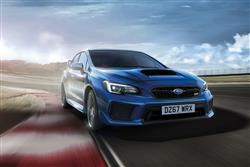 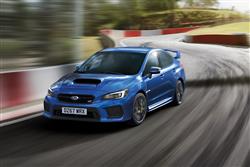 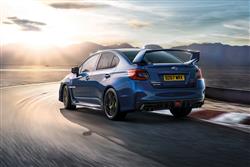 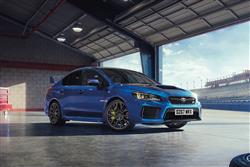 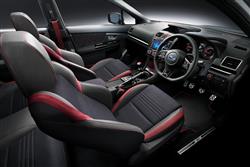