The second generation version of Subaru's XV crossover model now offers the option of a mild hybrid engine. And it's still more capable off road than you might expect a car in the family-sized Qashqai segment to be. Jonathan Crouch reports.

The Subaru XV has always been a smart-looking family-sized crossover vehicle offering the best all-wheel drive system in its class and some charismatic engines. The original version of this second generation model really just needed a little more running cost efficiency. That's now what's on offer courtesy of Subaru's latest e-Boxer mild hybrid tech - though the previous more conventional 1.6-litre Boxer petrol engine still continues at the more affordable end of the range. Overall, we think the XV is, now more than ever, something of an under-rated mid-sized SUV in the Qashqai-class segment. It's the sort of car that will have you praying for snow in the forecast.

The family-sized Crossover. Arguably, it's one of the motor industry's fastest growing market segments, a class of car that's usually these days more about fashion than substance. So what if you could get one with Qashqai-like style matched to Land Rover-like off road capability? What if this class of car, in other words, could actually walk the walk as well as talk the talk? That'd be quite something. That'd be unique. And that's exactly what this second generation Subaru XV claims to be designed to deliver. If any brand was going to be able to create a car able to do this, you'd put money on Subaru to do it. They were building models of this kind way before the concept became fashionable, with a history going all the way back to 1995 and the launch of the Legacy Outback, a chunky all-wheel drive estate then followed by more overtly SUV-like Forester and Tribeca designs. None of which really caught the imagination of British buyers. The XV though, has done better in this regard since its original launch here back in 2012 and took another step forward in this MK2 form, first introduced in 2017. The addition of e-Boxer mild hybrid tech should help this model's cause further.

The volume part of the XV range is made up of two normally aspirated boxer petrol engines, a 114PS 1.6 and a 150PS 2.0-litre e-Boxer unit. Both must be mated to Lineartronic CVT auto transmission. The 1.6-litre variant develops 150Nm of torque and gets to 62mph in 13.9s en route to 109mph. The 2.0-litre 150PS e-Boxer powerplant is embellished by a small electric drive motor with 16bhp and 48 Ib ft of torque. The e-Boxer set-up includes a little lithium-ion battery, allowing for fully-electrified emissions-free motoring for short periods. In the hybrid model, the electric assistance doesn't have much impact on performance - rest to 60mph takes 10.7s on the way to a top speed of 120mph. On the move on tarmac, the hybrid system's electric motor provides a bit more instant pulling power, especially when using the car's provided 'S' driving mode. Steering wheel gearchange paddles are provided and a rear stabiliser has been added for a little more cornering decorum. As ever with a Subaru, all versions of this car uses the brand's unique Symmetrical All-Wheel Drive system, plus it includes the company's X-MODE system. This is designed to increase drivability by optimising integrated control of the engine, the All-Wheel Drive system and the brakes to provide additional control when tyres slip and lose traction on a slippery road surface, including when descending hills. This means the car can take on steep slopes and descents, shuffling power between its various wheels. Subaru says the XV can lean over at up to 30-degrees, an unheard-of stat for a car of this kind.

This XV sits on Subaru's current 'SGP' global platform and remains quite a handsome thing, with cohesive, chunky styling. Subaru has designed this model around what it calls a 'Wide & Low stance' that's supposed to make it look sporty. The hexagonal front grille, the 'hawk-eye' headlamps and the rear light clusters are all quite different to those used by the previous generation model. The side profile remains much as it was, with a character line that runs from front wheel arch to rear shoulder and rises energetically. Inside, there's high quality seating with classy upholstery. In the centre of the instrument panel lies an 8.0-inch touchscreen display for the infotainment system, with the usual smartphone connectivity via Subaru's Starlink media system. This can brief you on weather and traffic reports, plus the set-up can also provide wireless audio, news updates and a calendar and in addition, its functionality extends to a range of apps that can be downloaded onto users' phones or tablets. The 380-litre boot is a little smaller than you'd expect but fold the rear seats down and things improve dramatically, with an excellent 1,270 litres on offer. Rear legroom is good and there's plenty of adjustability in the driving position but the seats could use a little more support.

The line-up is all-petrol-powered and all variants can only be had with a Lineatronic auto gearbox. The base model is priced from around £28,500 - that gets you a 1.6-litre engine and 'SE' trim; for another £2,000, you can have plusher 'SE Premium' trim. The e-Boxer 2.0-litre self-charging hybrid 'SE' variant starts from around £32,000 and again, there's a £2,000 extra to pay for 'SE Premium trim. Even entry-level models feature 17-inch alloy wheels, roof rails, daytime LED running lights and automatic air conditioning as standard. Safety provision is a notable XV strongpoint. The stiff platform used allows high levels of impact energy absorption, plus there are plenty of preventative safety features too. 'EyeSight', Subaru's camera-based safety package, delivers features such as Pre-Collision Braking Control, Adaptive Cruise Control and a Lane Keep Assist function. There's also an improved High Beam Assist system for 'Steering Responsive Headlights' that are able to move their beam right or left whilst cornering or at junctions to illuminate the direction of travel. In addition, there's also a 'Rear Vehicle Detection' system offering blind spot detection, lane change assistance and reversing assistance to enhance all-round preventive safety.

If you're hoping for significant efficiency gains from the e-Boxer powertrain, then you might be a little disappointed. Let's get to the WLTP figures. These are quoted at 35.7mpg on the combined cycle and 180g/km of CO2. These are virtually identical to what you would get from the conventionally-engined 1.6i petrol model further down the range. Which is a little surprising because at low speeds, the XV e-Boxer sticks with all electric power more readily than some rival self-charging hybrid models - you just have to be a bit careful with your right foot, though the engine will chime in to start charging the battery after about a mile. That engine automatically assists the battery and charges it up above 25 mph, before taking over all duties once you reach cruising speeds. The set-up also re-charges the battery when the car is braking or when you're coasting. A decently sized 60-litre fuel tank gives all models a useful touring range. And there's an ECO meter in the Multi Function Display dash display that helps you optimise your driving efficiency over time. Residual values certainly aren't going to be on a par with BMW and Audi, but Subaru is committed to doing what it can to make the ownership experience as painless as possible. To that end, you get a comprehensive five year / 125,000 mile warranty that's one of the best in the industry.

The SUV Crossover genre is one that Subaru ought to excel at. All the ingredients are already in place. The company can draw upon a long tradition of rugged, multi purpose all-wheel drive cars. The issue though in this segment is all about packaging and presenting this clever engineering in a way that's accessible and appealing to mainstream customers. With the improved version of this second generation XV, most of this is now sorted. It looks good, it's a reasonable size, it drives well and it will undoubtedly be very reliable. Previously, some of these attributes got hidden in the showroom as customers, fresh from looking at, say, rival Nissan Qashqai or Peugeot 3008 models, checked out the efficiency stats of this XV and found themselves disappointed. It was vital for Subaru to put this right. Now that they have courtesy of e-Boxer mild hybrid technology, there's little excuse not to include this Japanese contender if you're looking for a reasonably powerful model in this class. 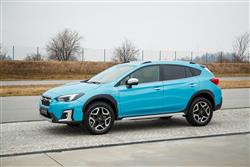 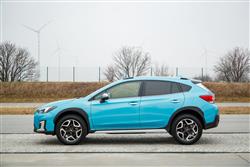 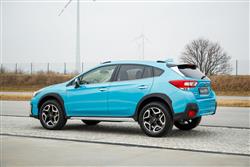 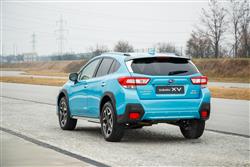 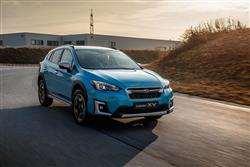 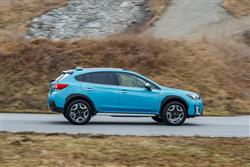