Today, so many tiny citycars cost the kind of money you might expect would buy you a larger supermini. Here's one that doesn't, Suzuki's Celerio. It was not only the most affordable model of its kind but also one of the cleanest, the most economical and the most spacious from its 2014-2019 period on sale. There are funkier alternatives, no question. But are there fundamentally better ones? That's what we're here to find out. Let's check this car out as a used buy.

There are very few brands who know more about small cars than Suzuki. Manufacturers who merely dabble in this sector usually produce trendy products prioritising style over substance. Those who specialise in little runabouts though, tend to deliver models like.. well, like this one, Suzuki's Celerio, launched in 2014. You can see at a glance from the practical shape that a more sensible approach has been taken here - with the same kind of thinking prioritised when it comes to questions of price, power and equipment. Globally, this car did its part in making Suzuki an increasing force to be reckoned with. In India for example, thanks to this Celerio, the brand took over 40% of the entire market in this period, while in Japan, the company dominated the so-called 'Kei' car sector for models less than 3.4m long with engines under 660cc in size. This isn't a 'Kei' car of course. In the West, we like our city-sized models to be a bit bigger than that. We like them a bit pokier too, so the Celerio adopted the same kind of 1.0-litre three cylinder petrol engine format used by many of its rivals, the engineering highlight here being a 998cc Dualjet unit that delivers close to 80mpg and under 85g/km of CO2 (NEDC figures). Of equal interest for potential buyers will be the news that the boot is class-leadingly big, there's a strong standard of safety and prices will significantly undercut most major rivals. It should all sound very promising if you're one of those with a sensible approach to city car ownership. This car sold until 2019.

Are you fed up with 'funky' small cars? Suzuki is. The Japanese maker acknowledges that there's a place for fashion-led little urban runabouts - it makes the Ignis to go up against models like the Toyota Aygo or the smart forfour. You sense though, that it can't quite see the point of them. In contrast, Suzuki's citycars have always been sensible and in 2014 this Celerio replaced two of the most practical models in the company's back catalogue, the affordable Alto and the slightly smarter Splash. It combines the virtues of those designs too, with the boxy, budget convenience of the Alto and the smart modern look of the Splash. The 'luggage space' part of this car's buying equation is explained by a simple but very effective piece of design at the back. This has nothing to do with anything you can see - like for example the chunky bumper and the V-shape made by the tapering tailgate - and everything to do with the stuff you can't - namely the torsion beam suspension housed beneath the floor. It was configured with what Suzuki calls 'flattened ends' that create a very low base for the cargo area. As a result, you get a near-class-leadingly practical 254-litres of luggage space. And 'practical' is a word that springs readily to mind on taking a seat at the front. Those graduating on from a spartan little Suzuki Alto might find it to be an upgrade but just about everyone else will see little but strong durability in the firm, utilitarian plastics. To be fair, a few efforts were made to brighten things a little, with silver trim framing the centre console and the air vents. Taking a seat in the rear can sometimes be a bit of a contorted process in a city car but here is aided by wide-opening doors you can pull out as far as 90-degrees. Once inside, the rear bench is, as advertised, pretty much as spacious as you'd expect to find in a supermini from the next class up. Importantly too, it offers three sets of belts in a class where nearly every other city car rival provides only two.

We struggled to find any owner with a bad word to say about their Celerio. One had a clutch disintegrate; that was about it. There was a well publicised braking system with early versions (caused through a faulty brake pedal) but this was quickly fixed. There was also a recall for models made between January and February 2018 relating to an bracket in the front seats not being correctly fitted which might cause a side airbag malfunction. Otherwise, there shouldn't be too much to worry about. Look out for the usual scratched alloy wheels, parking scratches and dents and signs of child damage in the back. And favour cars that have a properly stamped-up service history.

The Celerio is fun to drive thanks to firm but supple suspension and willing, thrumy 1.0-litre three cylinder petrol engine. This unit comes in either standard guise or in more frugal Dualjet form. Either way, there's 68PS on offer, enough for this normally aspirated powerplant to get you to 62mph in 14.0s on the way to 96mph. Go for the standard 1.0-litre model and town-bound folk can choose the option of AGS automatic transmission. Out on the open road, the steering's not especially feelsome, but its lightness is a boon in town where it makes parking easy and facilitates a tight 9.4m turning circle. You won't be expecting a 1.0-litre three cylinder petrol-powered citycar like this Celerio to cost you very much to run, especially given that this model weighs in at under 850kgs, whichever guise you choose. Sure enough, it's very efficient indeed. Even if you don't go for the clean and frugal 'Dualjet' version we'd recommend, you'll still get less than 100g/km CO2 and more than 65mpg on the combined cycle (both NEDC figures). Choose this car with AGS automatic transmission and those returns aren't affected at all: no, not one jot.

It's rather refreshing to come across such an honest and straightforward little vehicle. A Celerio is, different from other little urban runabouts from its era in so many ways. It's less fashion-conscious, so bigger inside. It's also better equipped and safer than many of its rivals - and crucially, much cheaper to buy. Go for the Dualjet version and you also get yourself the cleanest and the most economical car in the city car class from this period. It's also fun to drive, frugal to own and spacious to live with. There's even a bit of character here if you care to seek it out. As a result, unless you really are a fashionista in this segment, this Suzuki needs to be high on your shopping list for affordable city cars in the 2014-2019 era. Try one, then stack it up against pricier rivals from this time and one thing's for sure: there'll be no need for the hard cel. 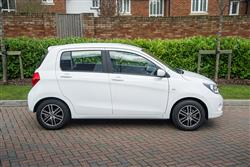 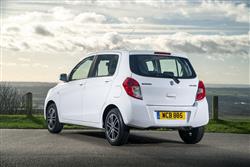 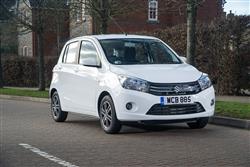 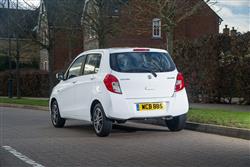 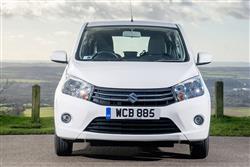 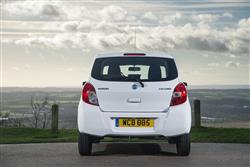