With the Suzuki Vitara these days more a road-biased Crossover than a true 4x4, maybe it's time to reflect on the much more rugged Grand Vitara that preceded it. Launched in 2005, it was extensively facelifted in 2009 before being tweaked for the final time in 2013. It's the post-2009 models we're going to look at here, cars that gained an 'SZ' tag and continued the Grand Vitara's approach of delivering a cheaper price than many key rivals while offering much more capability off the beaten track. A range of petrol and diesel engines, along with the option of three or five doors, mean plenty of choice for the prospective buyer. Often overlooked, it's a reliable and talented used buy.

Despite Suzuki's small car successes, you tend to think four-wheel drive when considering this enduring brand. The reasons why have much to do with this car, the Grand Vitara. Vitaras have been sold here since 1988, with the Grand Vitara taking over in 1998, but they were always pretty crude agricultural-feeling things until this second generation Grand Vitara took over in 2005. This model replaced the old version's separate ladder chassis underpinnings with a more modern monocoque approach, so the car was lower, lighter and much better to drive. And that was important for it at last enabled this Suzuki to be properly considered as a cut price alternative to pricey Toyota RAV4 and Honda CR-V-class compact 4x4s. All right, so it wasn't quite as accomplished on the road but it remained much better off it. Instead of shedding body parts and getting stuck in extreme conditions, buyers could expect this tough Grand Vitara to stick by them, courtesy of its rugged build and the five-door model's proper low range gearbox, a rare thing in this class of car. That was good but potential buyers still wondered whether this car would be as reliable where they actually needed it to perform - on the tarmac. The lack of grunt from the petrol 2.0-litre most people wanted and the absence of electronic aids like stability control told against it. Hence a package of 2009 upgrades that, along with a smarter look, brought ESP and a torquier 2.4-litre petrol engine - creating the 'SZ'-badged car we're looking at here.

While Suzuki ditched the need for the clunky 'separate chassis' design approach with this car, they still beefed the monocoque up with a couple of long steel reinforcements and kept some proper offroad kit. So yes, it can do the business in the mud but it's too heavy to handle like a Golf. Unlike the 'on demand' all-wheel drive systems of its rivals, the Vitara was a proper four wheel drive SUV, with a low range gearbox to help it crawl along at incredibly low speed and a locking centre differential to help when things get slippery. While not unstoppable, Grand Vitaras are much more capable than most rival models: there's a reason you'll see plenty in the countryside. Only three-door models got the 1.6-litre petrol powerplant, while both three and five-door variants can be had with the 2.4-litre petrol or 1.9-litre turbodiesel units. From the outside, the Grand Vitara doesn't scream 'look at me' but is handsome in a boxy yet muscular way. Unlike many other manufacturers, Suzuki didn't beat the styling with the ugly stick come facelift time either. No seven-seat option was ever available, though that did mean plenty of room for luggage and people in the five-door bodystyle. Rear headroom can be a bit tight though. As you would expect from a Japanese marque, reliability is excellent. Inside, interiors got progressively better with the post-2009 SZ models, with both perceived quality and spec levels improving throughout the life of this version. True, the cabin features some hard plastics, but the underlying quality is good, making for a hard wearing cabin. The three door-only SZ3 trim comes with remote central locking, air conditioning, electric front windows and stereo controls on the wheel. The plusher SZ4 spec adds bigger wheels, tinted rear windows and front fog lights, while the five-door only SZ5 flagship trim includes leather seats. There are plenty of other options, including various trinkets to jazz up the exterior appearance and a touchscreen Bluetooth stereo with sat nav.

The Grand Vitara is proving to be a dependable second hand buy but do check for service history and for a car that has clearly seen some love. With such off-road capabilities, it's worth checking underneath the front and rear bumpers, the sills and up in the wheel arches for signs of damage. The suspension could have taken a battering on the rough stuff, so check for leaking shocks and any squeaks or clonks. Deep scratches or broken trim in the boot could also suggest a hard life. Even if you don't plan on using it, check the 4WD system (including the low range gearbox) to make sure everything engages and works properly. Clattering engines and any transmission noise could also prove expensive.

The 1.6-litre petrol variant may seem the best value but it's less economical and less powerful than the diesel, sometimes struggling with the bulk of the car. The big news with the 2009-onwards models was the introduction of a 2.4-litre petrol engine to replace the previous 2.0-litre unit. This powerplant was pokier than the unit it replaced, offering around 170PS while chucking out no more carbon than the older engine. You wouldn't call it rapid but there's enough motive force even when fully loaded, plus it's also the only engine option if you want an auto. Fuel economy will be in the low 30s, which may not be of issue if you don't do many miles but may prompt you to consider the diesel. The 129PS 1.9-litre turbocharged diesel is provided by Renault and is a fine match. It may lack the outright pace of the 2.4-litre petrol variant but still offers adequate performance with much improved economy: upwards of 40mpg is possible. In typical 4x4 style, you sit good and high up and there isn't too much lurch and bodyroll around twisty lanes. If you do venture off road, you'll find decent axle articulation despite the tarmac-friendly all round independent suspension, plus ground clearance is better than that of obvious rivals. Approach and departure angles are good, while the low range gearbox really comes into its own when inching along slowly in deep mud or easing down a steep hill. It's no Land Rover Defender but it is very capable.

The Grand Vitara won't be for everyone. If you just like the idea of a high driving position but don't want to sacrifice road manners, it's not for you. If however, you need or want to go off-road, the Suzuki can really hold its own - unlike some of the competition. Throw in reliability and you have a good looking, potentially well-equipped and versatile vehicle that shouldn't pack nasty surprises. Small but significant upgrades throughout this second generation model's life substantially improved it, making the later post-2009 'SZ' variants well worth stretching to, especially for petrol buyers who'll get themselves a much better 2.4-litre engine beneath the bonnet. The diesel is also a sensible choice and either way, families will prioritise the extra practicality of the five-door bodystyle. Pick a high-spec SX4 or SX5 model and you'll have a cracking little 4x4. 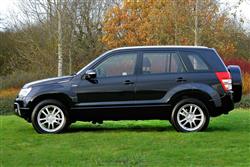 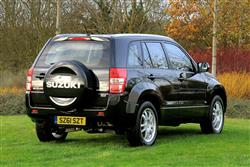 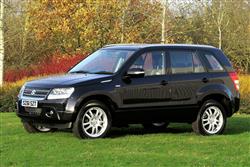 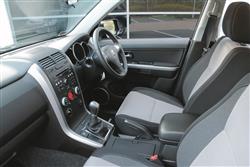