The Suzuki Swift Sport has long been a car embraced by serious drivers who know a great handling hot hatch when they see it. Though not especially powerful, it's agile, chuckable and brilliant fun for not a lot of money. Few potential buyers know this, so the idea with this third generation post-2011 model was to widen its appeal with a smarter interior, lower running costs, a little more grunt and even sharper handling. For all that, this warm hatch still remained a well-kept secret in this segment, but one loyal buyers will enjoy hugely.

We remember when Hot Hatches weren't all about power. You had a simple, revvy, normally aspirated engine and there was certainly no need to fuss about with extra go-faster gadgetry. Four-wheel drive, trick diffs, double-clutch gearboxes, electronic stability systems - all very nice but all there to add weight and cost to what ought to be a simple, inexpensive formula. You might think that it's too late to turn the clock back in this segment - but Suzuki doesn't and in 2011 proved it by delivering us this car, the MK3 model Swift Sport. This was - and still is - one of the best-kept secrets in GTi motoring, modestly powered perhaps but modestly weighted too, which means it can routinely put the wind up far more exalted machinery. Prior to the launch of this third generation car, over 6,000 Swift Sports already pounded UK roads, almost all owned by people who wouldn't give any thanks at all for an offer of trading their car against an equivalent pokier warmed-up Fiesta, Corsa or any other shopping rocket. Here, we're going to find out why, in analysing this third generation version, more efficient, faster and better equipped than any Swift Sport model before it. If you need convincing that power isn't everything in a performance car, then you need to drive this one. Initially, only the three-door bodystyle was made available, but in 2014, Suzuki offered buyers the option of the five-door Swift bodyshape too. Both variants sold until the launch of a replacement fourth generation model in 2017.

This car doesn't only show other hot hatches how they should drive. It also for us offers a good template on how they should look. Potently understated. Sure enough, there's nothing showy about this Suzuki, with cosmetic changes over the previous generation model that aren't really cosmetic but instead were aimed at further sharpening the driving experience by controlling the airflow and suppressing lift. Even so, there's a look assertive enough to suggest you might be in for a bit of fun at the wheel. The front end, with its large High-Intensity Discharge headlamps, was styled to give the design a lower visual centre of gravity, finned foglamp bezels sitting just above a deep front spoiler. Move towards the pertly-designed rear of the three-door only bodyshape with its sleeker rear combination lamps and you'll note the way that the car hunkers down over its lovely 17-inch sports alloys. It's an inviting prospect. Inside, it's not quite as smart but appropriately, it is very driver-focused. A trio of overlapping dials in the instrument binnacle sit behind the sports steering wheel, while a tapered centre console draws the eye to the gear lever that marshals the six-speed manual transmission. The sports seats offer plenty of lateral support and the view out of the car is better than in most rivals, thanks to that upright seating position and big glass area. It's true that the fit and finish in the cabin won't have you wondering whether you're in an Audi A1, but it's all of much higher quality than the previous version of this car could manage and more than up to the standard you'd expect for the modest price being asked. We can't see many buyers bothering to use the rear seats very often in the three-door model (a five-door variant was also made available), but if they are called into use, then a couple of adults (or at a pinch three children) will be reasonably comfortable, especially since there are headrests high enough to actually support your head. Far more comfortable, certainly, than they would be in the tiny pews offered by this model's most direct rivals from this era, the Renaultsport Clio, the Fiat 500 Abarth or the MINI Cooper. Out back, there's a 211-litre boot, extendable if you push forward the 60:40-split rear seat to 512-litres, slightly less for some reason than the total on offer from an ordinary 3-door Swift model. But again, both figures are far better than those delivered by obvious and much smaller comparably priced rivals.

Not much goes wrong with a MK3 model Swift Sport. We came across an ESP failure. A few owners reported interior trim rattle. One pointed out how easy the wheels are to kerb. And a few pointed out that the tyres are very expensive due to their odd size. There have also been some reported problems with the clutch pedal too; apparently, on some cars, it refuses to come back up properly once depressed. One owner also said the gearbox was noisy when the clutch was depressed. Otherwise, there shouldn't be too much to worry about. Look out for the usual scratched alloy wheels and signs of child damage in the back. And favour cars that have a properly stamped-up service history.

Back in the Eighties, small affordable hot hatches were characterised by one model: Peugeot's classic 205 GTi, a normally aspirated 1.6-litre shopping rocket with a power to weight ratio of 128bhp per tonne. Which is exactly what we have here with this MK3 model Swift Sport. No coincidence then, that few fast superminis since that iconic 205 have been more fun to drive than this one. Only Renault sticks to the track-developed, normally aspirated, lightweight hot hatch formula these days but its fast Twingo is smaller and cruder, whilst its quick Clio is much more expensive and far more powerful. But the appeal of this Suzuki has never had much to do with pure power. After all, the Japanese engineers could easily have turbocharged the 134bhp 1.6 on offer here and upped the engine output close to 200bhp, but that would have just made the whole package uninsurable and over-priced for the younger drivers the brand wants to attract. So instead, and rather sensibly, the engine power was kept on the modest side for this third generation Swift Sport, hiked by just 10%. Thanks to a light kerb weight of only just over a tonne, that's still good enough though, to see you from rest to sixty in 8.7s on the way to a top speed of 121mph. So you may not win too many traffic light Grand Prixs. No matter. Accessing the speed that is on offer is a hoot. Away from rest, this car doesn't feel especially fast at all in an era where we're used to turbo engines instantly delivering all the urge from low down. Here it's different: you've to stir the slick-shifting closely ratio-ed gearbox into life and work the engine. If you're an experienced driver and can steer on the throttle and heel-and-toe through your gearchanges, you'll find the car's perfectly set-up for that. If you're not, no matter. This is a perfect starting point for your first rung on the performance ladder: everything's predictable and there's a good set of brakes too. In fact, this Swift Sport is apparently a favourite training choice for novices around the infamous Nurburgring Nordschleife racetrack: we can see why. As we said, you've got to push this engine a bit for really rapid progress. Yes, OK, the peak 160Nm of torque is delivered a littler earlier than with the previous model, but you've still to get to a buzzy 4,400 revs before you see it and for maximum power, you've to be up at the heady heights of 7,000rpm. But by that time, you might well be sporting a very wide grin indeed, especially if you're on your favourite tight twisting back road, a place where you'll find very little that can get away from you. Thanks to quick and accurate steering 20% more responsive than with the MK2 version, a wide track and a short wheelbase, you can confidently throw this car into the tightest corner, whereupon you'll find that it's really agile. The engineers achieved this through a more rigid torsion beam suspension set-up and stiffer springing as well as a whole package of detail tweaks we won't trouble you with here. You don't need to know how it works. You do need to try it. But won't such a taut set-up make this car an unpleasant highway companion? Apparently not. Despite all the stiffening that went on underneath, the ride to us feels no worse than any other mildly sporting supermini from this era. Plus when you're not revving the engine, it's actually quite refined. And the provision of a six-speed gearbox to replace the old five-speeder makes longer trips more relaxing than you might expect from a car of this kind.

If you're looking for an affordable hot hatch from the 2011 to 2017 era, you might have forgotten about Suzuki's Swift Sport. Big mistake. Here, you get old-school GTi fun without old-school crudeness. You even get relatively old-school pricing. You won't be moved to buy one after looking at the spec sheet, but take a test drive down your favourite back road and we guarantee you'll see this car a whole lot differently. We don't think the scale of this Japanese brand's achievement here should under-estimated. Bringing a hot hatch up to date usually means increasing its weight, price and complexity. None of which happened here. Leaving the MK2 model Swift Sport as a car you buy if you've nothing to prove as a driver but everything to gain from driving it. It's exactly the way every real shopping rocket should be. 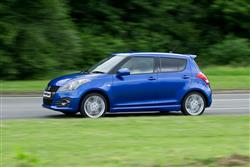 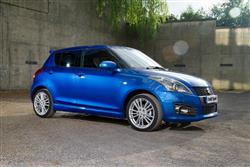 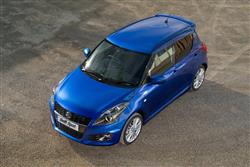 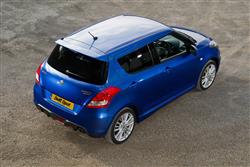 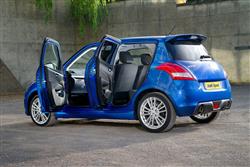 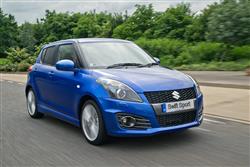