Car manufacturers have developed their wares into ever smaller niches looking to gain a competitive advantage and Suzuki is one that will occasionally come up with something quite creative - as was the case with the first generation version of its SX4. The formula doesn't initially seem that groundbreaking - taking a supermini-sized hatchback, adding some SUV styling cues to it and introducing the option of 4WD - but it was marketed as a more affordable option to a soft-roading compact 4x4. These so-called 'crossover' models like the Nissan Qashqai have done good business in recent years but they tend to weigh in at around £15,000 to £20,000 bracket. What if the same concept could be applied to a slightly smaller car - for a much smaller price? That's exactly what's offered here by Suzuki, a recipe that was improved in 2010 by the lightly facelifted SX4 model we're going to look at in this guide. Here's how to track down a used bargain.

If the dates at the top of this review don't quite tally up with your recall, don't worry, you're not getting a bit forgetful. The first generation SX4 was originally launched in 2006, but was improved substantially early in 2010, creating the version we're looking at here. Suzuki needed to enhance power yet improve emissions and economy in the 1.6-litre petrol version that most customers chose. Both were duly accomplished, plus a competitive diesel option was needed - and provided by a torquey 2.0-litre DDiS unit. You will find early facelift cars still fitted with the old 1.6-litre diesel, but it's worth paying extra for the superior 2.0-litre unit. The front-wheel drive petrol-engined cars arrived first, with vehicles rolling into dealerships in January 2010. We had to wait until April of that year for deliveries of the all-wheel drive model and the diesel engined cars to begin. Sales were steady, as the facelift was modest and many customers didn't actually know that there was much new with this vehicle, Suzuki's marketing budget not stretching particularly far. July 2011 saw the introduction of a Special Edition SX4 model, X-EC, priced at £13,430 including metallic paint. Available in two wheel drive format with the 120PS 1.6-litre petrol engine and manual transmission only, it was relatively well equipped with a colour satellite navigation system with Bluetooth connectivity, a USB Port, unique design alloy wheels, electric folding door mirrors with built in turn signal lamps, rear privacy glass and a new design seat fabric. Suzuki displayed an SX4 S-Cross concept at the 2012 Paris Motor Show which looked suspiciously production ready and it formed the basis of an all-new vehicle which replaced this generation SX4 in mid-2013.

The five-door SX4 is obviously a crossover - but certainly not as SUV-like and in your face as more recent interpretations on this theme from slightly larger Qashqai-class cars. Visual tweaks to the improved version are very minor, amounting to changes to the grille and front bumper. But if you were to save a few thousand and buy this car rather than Crossovers like Nissan's Qashqai or Peugeot's 3008, would you really miss their extra space? Well judge for yourself. The SX4 won't take three people across the back seat as easily - but there's decent room for two adults. And the 270-litre boot isn't huge - but it can be increased to 1045-litres with the split-folding rear seats flattened, which is more than a 5-door Qashqai.

The Suzuki SX4 is a tough little thing. The cabin feels a bit cheap but everything is reasonably solid and the seat fabrics are hardwearing. The mechanicals are all tried and tested and the 4GRIP model doesn't have the power to overwhelm the traction advantage on tarmac. Make sure you have a good look under the car at the exhaust system and the suspension for signs of over enthusiastic off roading. Reject anything that looks as if it's been passed over a belt sander.

For a car a shade over four metres long and weighing another shade over one tonne, the SX4 isn't short on horsepower in entry-level form. The 1.6-litre petrol unit which props up the improved first generation range has 10% more power than was originally offered, thanks to a different cylinder head and block, increased valve lift and a variable intake system. Don't worry about the technicalities of all that: what it basically means is that it's all more efficient, so you get more power and use less fuel. Have cake: eat it. It's as simple as that. And talking of 4x4 vehicles, there is an all-wheel drive option on offer here - on the top petrol 1.6-litre variant - though few SX4 customers choose it. That's a pity for the 4WD system on offer is rather clever. It stays in fuel-saving front-wheel drive mode most of the time. As soon as the system detects that a front wheel is relinquishing grip, it instantly diverts a percentage of torque to the rear wheels, giving the car the ability to haul itself out of some very sticky situations. If you really do get stuck, then a lock mode ensures that front and rear axles are locked together to provide ultimate traction.

The Suzuki SX4 is a car that was refined nicely in this first generation facelift guise but still retained its low price. So it's a winner then? On a qualified basis only, unfortunately. For a 'utility' vehicle of sorts, it was just too small for most family requirements, and if you didn't need or want the all-wheel drive system, it was bettered by the likes of a Ford Fiesta or a Vauxhall Corsa as an everyday value proposition for most people. Plus there was the fact that Suzuki's dealer network could never match the reach of the big operators. Those issues don't really go away when looking at the car used and the front-wheel drive versions still struggle to justify their existence to many. The really attractive combo would have been the 2.0-litre diesel engine with the all-wheel drive chassis but that was never offered. Suzuki rectified all of this with the SX4's bigger replacement, which was also offered with an all-wheel drive diesel model, but here prices started to creep up towards the likes of the Nissan Qashqai and Toyota RAV4. So unless you really need the space and the ultimate economy, our pick would be an all-wheel drive 1.6 petrol SX4. It's a niche proposition for sure, but there's really nothing else quite like it. 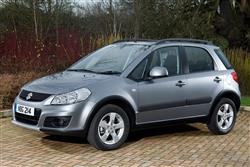