What would interest you in buying a used Toyota Auris? Decent drive dynamics? A sharp sense of style? A wide choice of efficient engines? All of that is on offer - in theory at leasyt - from this post-2015-era Auris, an improved version of the MK2 model. This was a more confident Focus-class family hatch that's good value, was British-built and amongst family hatches made in this period, is uniquely available in this segment with hybrid power. If you're shopping in this sector, you might not be considering it - but perhaps you should be.

We buy cars for all sorts of reasons, some sensible but others rather more personal. While it's the extreme designs that tend to grab the headlines, there's still a lot to be said for models that simply work ever so effectively in the real world: like this one, the significantly improved second generation version of Toyota's Auris, launched in 2015. It's a family hatchback developed from experience that bought us the best selling car of this kind in history, Toyota's Corolla, 35 million examples of which were sold in its lifetime before the first generation Auris model took over in 2007. This original Auris, its name derived from the Latin, 'aurum', for gold, arrived as a safe and sensible choice that built upon the strengths of its predecessor without threatening the Focus and Golf fraternity in any particular way. It did though, have the distinction of pioneering hybrid power in this segment back in 2010. But the world's biggest brand needed to go further in a market increasingly demanding more dynamic, appealingly styled, hi-tech and efficient products. With tough competition not only from the mainstream makers but also from up-and-coming Korean budget brands, the company needed to give the Auris a more contemporary look and feel, hence the original introduction of this second generation version in 2012. Unfortunately, the sharper exterior looks weren't really replicated inside. And, more significantly, this model had to carry over much of its engineering from its first generation predecessor. It all meant that Focus segment buyers not sold on the concept of hybrid power often ignored Toyota's contender in this class, an increasing problem for the Japanese brand in the face of the continually improving opposition. Hence the need for the heavily revised MK2 model Auris we're going to look at here as a used buy, a car launched in the Summer of 2015 and featuring a range of changes that also allowed Toyota to launch this design in the American market. These enhancements include a smarter look, both inside and out; improved driving dynamics that deliver sharper steering, better ride quality and additional refinement; and a rejuvenated Euro6 engine line-up featuring an new 1.2-litre turbocharged petrol powerplant. There was also extra safety technology and cutting-edge connectivity to complete what was certainly a much-improved package. It sold until late 2018, after which the car was replaced by a returning new-era version of the Toyota Corolla.

The original design of this second generation Auris model was a lot slicker than its predecessor, incorporating what Toyota calls its 'keen look' - all sharp angles and smart, rakish lines. And that more purposeful lower-slung styling was further developed with this revised MK2 model, which features redesigned front and rear sections that aim to give the car a broader stance and what the Japanese brand hoped would be 'a more prestigious and sophisticated presence'. Look around at the wheel and you'll see that the cheap silver paint finishes of the original MK2 Auris model have been replaced by real chrome, there's a classy 'piano black' finish for the prominent door pulls and the more curvaceous dashboard gets a smoother, soft-touch surface and a smart stitched trimming. And the rear seat? Well Toyota was always proud of the fact that the Auris was one of the most compact cars in the family hatchback class, though you might not think this to be a particularly good thing if you've a family of five to carry about. Fortunately, some very careful design has ensured that you don't notice the compact dimensions. Take the sloping rear roof height for example, disguised by the way that the ceiling gently bulges over your head. And out back? Does the relatively compact shape compromise boot space? No really. There's quite a high loading lip, but the wider tailgate opening introduced with the original version of this second generation model is welcome and beyond it, there's the capacity to swallow up to 435-litres if you load to the roof - pretty good by class standards and far more than you'd get from, say, a rival Ford Focus from this era.

Very little goes wrong with the Toyota Auris. Look for the usual parking scuffs and scraped alloy wheels. Check the wear on tyres for signs of suspension misalignment and check that the car has been regularly oil serviced. Otherwise, there's not really much else to worry about. The interiors have proven hardwearing although the one moan existing Auris owners repeat about their cars is that the complex dashboard mouldings can creak and rattle. In our ownership survey, one owner complained of faulty sensors that sometimes refused to work in winter and gave error messages every few meters along with a constantly flashing orange warning light. There were complaints about the infotainment screen's smartphone-projection feature. One owner had a problem with slipping gears on the MMT semi-auto gearbox.

You don't buy an Auris if you're seeking a really dynamic driving experience from a family hatchback of this kind but in second generation form, this car proved to be a big improvement on its unexceptional predecessor. This revised MK2 model made another step forward in this regard, courtesy of a package of changes primarily aimed at enhancing comfort and day-to-day ease of use. In this form, the car was quieter and offered sharper steering. The car rides a little better too than its earlier predecessors too, though the extent to which you'll feel that depends on the engine variant you choose. The two oldest Auris powerplants, the 99bhp 1.33-litre VVT-i petrol unit and the 90bhp 1.4-litre D-4D diesel, must be satisfied with a rudimentary torsion bar rear suspension set-up. That's replaced by the more sophisticated double-wishbone arrangement you get with the engines offered further up the range. These include a freshly-developed 112bhp 1.6-litre D-4D diesel capable of 67.3mpg and 108g/km of CO2. And another powerplant added to the MK2 model line-up, a 116bhp 1.2-litre petrol turbo unit that offers perky performance, making 62mph from rest in 10.1s en route to 124mph. At the top of the line-up, as before, there's the option of a 1.8-litre petrol/electric hybrid version that delivers 78.5mpg and 81g/km in a model that can travel up to a mile on pure electric power alone.

If you're the kind of person who brings uncompromising reason to the purchase decision when it comes to getting yourself a new family hatchback, then you'll bond with this Auris right away, particularly in this revised MK2 form. Optimal Drive technology, hybrid power, low servicing costs, decent residuals: it'll all be music to your ears. What changed with this improved second generation Auris design though, was that the car became sharper looking, more accomplished to drive and more value-orientated. Plus the introduction of 1.2-litre petrol Turbo power and the 1.6-litre D-4D diesel engine meat that at last, this car could be a fully competitive prospect for those not prioritising hybrid power - or those who can't quite stretch to it. The petrol/electric option's worth trying though and it remains unique amongst family hatchbacks from this era. There are still, it's true, more dynamic, more versatile and more up-market-feeling choices in this class from this period, but not many of them stack up quite as well as an overall ownership proposition. What we've got here then, is a family hatchback with a Toyota badge that's class-competitive in almost every way. There are more exciting options in this class from this era. But you may struggle to find more sensibly-orientated ones. 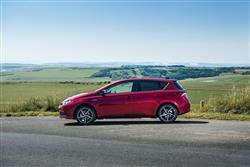 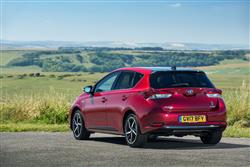 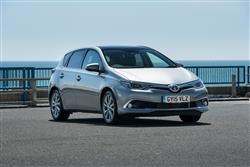 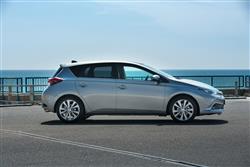 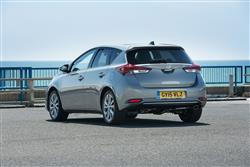 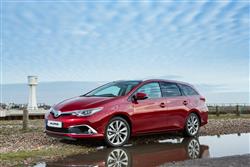