The second generation version of Toyota's Aygo citycar launched in 2014 proved to be a little more efficient, a little more hi-tech and a little more fun to drive than its predecessor. Plus it offered a whole host of personalisation options. This was - and is - in the brand's own words, 'a car you could be proud of'. It certainly has a lot more of its own identity in MK2 guise. Let's check it out as a used buy.

So, what makes a car feel 'fun'? Sprightly handling? Cheeky looks? Clever marketing? And can an urban runabout really qualify for purchase on those grounds? With this model, the second generation Toyota Aygo, we were told that it could. You might think you know this car but if you haven't tried this MK2 version, launched here in the Summer of 2014, then you probably don't. Yes, it shares many of its mechanicals with the original design. No, it's not the same. Let's start with the fundamental thing that wasn't changed here. As before, this design was produced as part of a joint Toyota/PSA Group venture that also brought us French alternatives sharing most of this car's important bits - namely Peugeot's 108 and Citroen's C1. That was also the case with the first generation Aygo, but that car didn't make much attempt to differentiate itself. This one proved to be very different. It wasn't only the look that was unique but also the very specific way that original buyers could personalise it to suit almost any kind of taste or preference. On top of that, no other competitor from this era (2014-2017) is more efficient, safer or more laden with technology. That ought to be enough for starters. Let's see what else this MK2 Aygo has to offer the used car buyer. We'll focus here on the original; version of this car which sold until mid-2018, when a facelifted model was announced.

You'd expect a small modern-era Toyota to be pretty free of faults and, by and large, most of the buyers in our ownership survey seemed pretty satisfied. However, a few issues have surfaced. The clutch problems that afflicted the previously generation Aygo aren't as prevalent here but they still exist; check the clutch biting point and gear engagement on your test drive. We heard a few reports of exhaust issues too, evidenced by a growly sound from the tailpipes. In one instance, the airbag warning light came on erroneously on the dash. In another, there was a water leak on the front footwell. And in another, a faulty seal caused the car to ice up on the inside on cold mornings. Otherwise, it's just a case of insisting on a fully stamped-up service record, checking any alloy wheel from chips and scrapes and inspecting the rear of the interior for any child damage.

So, this car is supposed to be 'fun to drive'. But just how much 'fun' is it really possible to have in a car with just 69 braked horses beneath its bonnet? Actually, a surprising amount. For a start, the 998cc unit sounds playful, its normally aspirated note filling the cabin with a characterful three cylinder thrum. True, the long first and second gear ratios mean you'll have to rev it quite hard for meaningful progress but there's plenty of performance for town trips. Citycar buyers are more loyal to petrol power than any other group of motorists and Toyota has been more loyal to the particular petrol engine used here than you'd expect a brand to be. Its fundamentals do, after all, date all the way back to the launch of the first generation Aygo model in 2005. Still, on the quiet, many engines today have fundamentals that go back quite a long way. Anyway, this one has been very thoroughly re-worked for the modern era, a higher, compression ratio, an improved combustion chamber design and use of a low-friction timing chain all combining not only to improve efficiency but also to boost power slightly over the previous model. If you were familiar with that car, then you should find this one to be a touch more driveable. For a start, in the original Aygo, you needed to really wind some revs onto the clock in order to get anywhere - which had a marked effect on your fuel consumption. In this car, nearly all of its 95Nm of pulling power is available right down low in the rev range, from as little as 2,000rpm, so you won't need to rev the thing to death in order to get it going. Once on the move, the first thing you'll probably notice is just how light most of the controls are - especially the steering and the clutch. The exception to this is the gear change, which needs more of a firm shove than you'd expect from a car designed with urban driving in mind. If that's an issue, then you might well be tempted by an automatic 'x-shift' gearbox model, which features a transmission that's potentially controllable via a set of steering wheel gearshift paddles that we doubt too many potential owners will bother with. The 'x-shift' variant will certainly suit urban-bound folk, people who'll also appreciate the tight 4.8m turning circle and that light steering. Parking is as easy as you'd expect in a car with an overall length of under 3.5m, with good all-round visibility marred only slightly by the chunky rear C-pillars. The wide rear wheel arches might be a bit vulnerable here but since most variants will probably be fitted with the 'x-touch' multimedia system's standard reverse parking camera, that shouldn't be a problem. These big, clear mirrors should help too. Venture beyond the city limits and you won't be expecting too many performance fireworks. Nor will you get them. This car's Peugeot 108 and Citroen C1 design stablemates offered a more powerful 82bhp 1.2-litre VTi petrol engine as an option to this 1.0-litre unit, an engine Toyota didn't want. The result is that Aygo buyers must be content with distinctly modest levels of performance. The sprint to 62mph is covered in 14.2 seconds if you choose the five-speed manual model but takes a yawning 15.5 seconds if you go for the x-shift automatic. Both variants run out of steam at 99mph. Could you comfortably venture further afield in this car? Potentially yes. Both wind and road noise have been effectively suppressed at typical A-road speeds to make that more possible and you certainly notice the difference on the motorway. There doesn't though, seem to have been much effort put into isolating the engine note. If anything, that's been emphasised as Toyota believes it contributes to this car's whole 'fun' ethos. There's a really lively thrum under acceleration, something you'll either like or you won't. At least it makes the car feel peppier than it actually is. The brakes also feel up to spec, despite this Toyota doing with without rear discs and opting for a cheaper rear drum setup instead. And handling? Well the Aygo development team say that they benchmarked the Ford Ka in this respect, one of the results of which was that the steering was made 14% more direct than the old car. True enough, it does provide more fingertip feedback than before. Other incremental dynamic improvements included re-tuned springs and dampers, plus a lighter rear torsion beam, one of the things contributing to a 60kg weight saving over the previous model. The result is a slightly more agile, chuckable city runabout that can be driven with a bit more vigour but it still isn't the driver's choice in this segment, though that's something few likely buyers will care much about. Pitch into a corner and you get the predictable helping of body roll and tyre squeal you'd expect from this kind of car. Stick with it though and this Toyota can, nevertheless be pretty good fun to pedal along, It might perhaps have been sharper in this respect had not Toyota's engineers - rightly - been so mindful of the need to preserve a decent standard of ride quality. Because they were, this car handles road humps and potholes very well. It's that bit better in this respect than before. In fact, as you've probably gathered by now, almost everything about this second generation car is that bit better than before. No radical steps have been taken: the car just feels that bit more sophisticated and grown up than its predecessor.

At first glance, it would be entirely understandable if you felt that this second Aygo interpretation was a case of style over substance. The wheelbase is the same as the MK1 model, you still find a 1.0-litre three-cylinder petrol engine beneath the bonnet and the basic handling dynamics are little changed. Even the interior accommodation is much the same. Despite all of that though, there's no doubt that the updates that created this second generation Aygo really brought it into contention in this segment. The cabin feels far more modern than that of the previous design, the clever x-touch infotainment system is a must-have and it's hard to think of a bolder, more progressive-looking citycar from the 2014-2017 era. Yes, it's a design that still might disappoint in terms of total space. And the improved handling still doesn't quite hit the class benchmark. But it's versatile and fun to drive enough for these things not to put you off imagining one in your mental driveway. From being forgettable, the Aygo is in this form genuinely likeable - and there's a world of difference between those two attributes. You could imagine caring about this Toyota - feeling a genuine sense of pride in ownership. If that was Toyota's aim, then the mission was accomplished here. 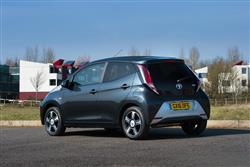 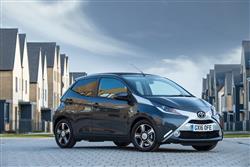 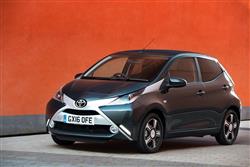 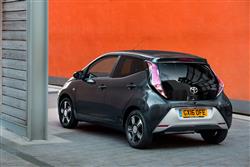 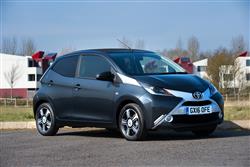