If tasked to identify the most bullet proof of all the family 4x4 vehicles, most wouldn't hesitate to finger the Toyota Land Cruiser. It's a car that's engineered to be able to field service an oil well in remotest Kazakhstan or to maintain rabbit-proof fences in the Aussie outback, so taking care of an undropped kerb on the school run is unlikely to faze it. It's exactly this level of built-in over-engineering that makes the Land Cruiser so appealing, even in its smaller 'Light Duty Series' 'J150' 3.0-litre diesel guise. No matter what you throw at it, it comes back for more. Yes, you can buy slicker, more urbane rivals, but when the chips are down, there's only one car you'd want to be in. In 2009, a new generation 3.0-litre D-4D diesel design was launched for the modern age, a car just as tough as before but more in tune with those who simply wanted to impress on the school run. Here's how to track down a used one.

To us, this car is a Toyota Land Cruiser. In many world markets, however, this 'Light Duty Series' model is known as a Land Cruiser Prado, the smaller 'diffusion line' of the real deal. But given that that real deal is usually powered by a monstrous V8 engine, we've settled for the Prado, here featured in post-2009 'J150'-series form, sold simply as the 'Land Cruiser' in the UK and powered by an unstressed 3.0-litre turbodiesel of fairly modest power output. Its 'J120'-series predecessor set the template for this car. That model was launched in 2003 and successfully bridged the gap between slick SUVs like the BMW X5 and genuinely agricultural fare like the Land Rover Defender. Here, in other words, was a car that you could drive across a field one day and, after a quick wash and brush-up, arrive in style at a social function. The 'J150'-series car we look at here took up the reins in 2009. Running on much the same body-on-frame chassis, it was clear that this was more of an extensive refresh than an all-new car. Nevertheless, the 2009 model year 'J150' Land Cruiser included some new features, such as the Toyota EasyFlat third row seats that can be raised of folded flat at the touch of a button on LC4 and LC5 models. The usable load space was significantly increased and a new rear glass hatch allowed items to be loaded without having to open the full side-hinged tailgate - ideal for tight parking places. At the start of 2011, Toyota launched a luxury 60th Anniversary model to sit above the existing LC5 trim grade. At the other end of the range, it also reintroduced a three-door version of Land Cruiser. Available exclusively in LC3 trim with manual transmission only and five seats, it came equipped with 17-inch alloy wheels, vehicle stability control (VSC) with active traction control (A-TRC), climate control, a smart entry and start system, Bluetooth, a six-speaker audio system and front fog lamps and at just over £30,000, made Land Cruiser ownership that bit more affordable. Perhaps the biggest change at this time was the re-engineering of the 3.0-litre D-4D engine. As a result, maximum output went up from 171 to 188bhp and maximum torque from 410 to 420Nm - performance gains achieved without harming fuel economy or emissions levels. With the benefit of a diesel particulate filter (DPF), the engine met Euro 5 emissions standards.

The Land Cruiser's size (4,760mm long and 1,885mm wide) means that while owners are driving theirs to the ends of the earth, they can take lots of people with them. The vehicle can be specified with five seats or as a seven-seater with the Toyota Easy Flat Seating system that's used on the marque's MPVs. On Easy Flat models, the second row is split 40:20:40 with reclining seatbacks and the capacity to slide up to 135mm back and forth to adjust the legroom. The lowering action of the outermost seats is powered by electric motors to make access to the rear more straightforward. The Land Cruiser isn't about to win any prizes for design innovation. It's pretty much your typical large 4x4 - bluff fronted and imposing with few concessions to elegance. Distinctive flat-topped wheelarches, a bold sill line and powerful haunches catch the eye. In the cabin, the build is predictably robust and a lot of attention has been paid to the storage options which include a large box in the centre console that can be fitted with a fridge unit. Climate control, cruise control, keyless entry and start, Bluetooth compatibility and 17" alloy wheels are amongst the features on the 'basic' LC3 models. There's also safety kit that runs to an advanced traction and stability control system, seven airbags, ABS and active front headrests.

What to look for? How about the smug feeling of satisfaction that comes with buying the toughest 4x4 in its class. Time and again, the Land Cruiser comes top of customer satisfaction surveys and there's a reason for that. It's been engineered to cope with enormous doses of punishment and Toyota has a track record of over sixty years of realising what works and what doesn't. Even in the more powerful 2011 guise, the 3.0-litre D-4D engine is an understressed thing and doesn't make much more power than a BMW 2.0-litre turbodiesel. That means it goes on and on. Here's a car that you could easily run for a quarter of a million miles without an uneconomical maintenance overhead.

(approx - based on a 2010 Land Cruiser LC3) A full exhaust system around £750, front brake pads are around £60 and a radiator is about £250. An alternator around £200 and a starter motor also about £200. Given the remote probability of anything but consumables being required, the Land Cruiser works out pretty cheap on parts. Just be careful about the front end when tackling off-road inclines as some of the grille plastics and the headlight units are expensive.

There's one engine available, a 3.0-litre D-4D diesel that's matched to a five-speed automatic transmission. This four-cylinder unit wasn't exactly new to the 'J150'-series Land Cruiser in 2009, having been the main power option in the previous generation 'J120' car, but it is tough, reliable and packing lots of torque. There was 171bhp to call upon in early cars which isn't a whole lot in something this large but the 410Nm maximum torque is available from 1,600 to 2,800rpm, so the Land Cruiser should feel livelier than its 11.7s 0-60mph time and 109mph top speed lead you to expect. Attempting to produce a car that's good on the road and off it is a major challenge for automotive engineers. The ground clearance, absorbent suspension and wheel articulation that are necessary in the rough aren't conducive to a nimble feel on the blacktop where a low centre of gravity, composed ride and resistance to body roll are paramount. To get around this, all bar the basic Land Cruiser models employ the advanced KDSS Kinetic Dynamic Suspension System that adjusts the vehicle's anti-roll bars to suit the driving conditions - increasing rigidity on the road or cutting the Land Cruiser some slack when negotiating big obstacles.

The 'J150'-series Toyota Land Cruiser ought to be an easy used car to recommend and if you're looking for a family-sized SUV prioritising toughness and reliability, it gets the nod from us. The big caveat here is that the used market cottoned onto this fact a long time ago and as a result, getting hold of a Land Cruiser isn't going to be cheap. The base LC3 looks the best pick, with used prices looking a little more sensible. If you want deep, ingrained quality, you clearly need to pay for the privilege. 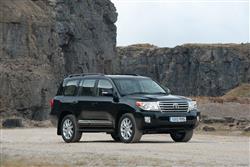 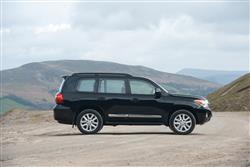 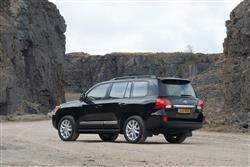 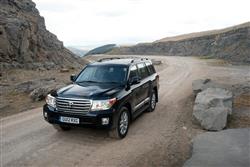 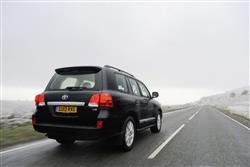 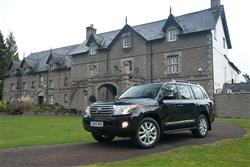