The Mokka X is a small Cossover model that Vauxhall can't afford to get wrong. Jonathan Crouch looks at the tempting 1.4 petrol Turbo 4x4 variants.

The Mokka X represents Vauxhall in the compact crossover market. Let's see how it stacks up in 1.4-litre petrol turbo form equipped with 4x4 traction.

For a mainstream manufacturer, Vauxhall has been notably absent or virtually absent from quite a few profitable market niches in recent years. They've done well in the growing small crossover segment though, since launching this Mokka model in 2012. Here, we've got the upgraded Mokka X version. As before, this design scores a small victory over its arch-rival, Nissan's Juke, by more affordably offering AWD. So let's look at the 1.4T AWD derivative.

The Mokka X has clearly been designed for the urban environment but that's not to say the ability to be driven off-road has been totally neglected. To this end, Vauxhall wisely offers both front and four-wheel drive chassis options to petrol people, with the all-wheel drive mechanicals we're looking at in the 1.4-litre petrol turbo model here being fully adaptive. When the vehicle's being driven on smooth, dry surfaces, all drive is sent to the front wheels for optimum efficiency but when the road surface is slippery, as much as 50 per cent of the drive is automatically diverted to the rear axle. There's not even that much of a weight penalty for choosing the four wheel drive version as the mechanicals add a mere 65kg, which isn't going to put too big a ding in emissions and economy figures. If you can stretch to it, I'd suggest that the 1.4-litre turbo petrol Mokka is possibly a better bet than the 136PS 1.6-litre CDTi diesel variant. 62mph from rest in the 4x4 version is just 9.3s away enroute to 116mph, so it's usefully rapid, and there's a healthy 200Nm of torque. It isn't an especially rewarding car to drive - the extra weight and the higher stance of the SUV genre count against it here - but then if you come to almost any car in this class expecting fun at the wheel, the truth is that you're probably going to be disappointed. Anyway, come on. Nobody buys a car of this kind and drives it like a hot hatch. The high stance that necessitates the firm damping and provokes that bodyroll is the thing that gives you that lovely raised seating position, something you'll particularly appreciate in urban driving. That's when you'll also thank Vauxhall for the lightness of the steering, which is perfectly weighted for the challenges of town terrain.

The Mokka's compact size - it's 4.28m long - places it in the upper part of the compact Crossover segment. In other words, in terms of exterior dimensions and cabin space, it's more Honda HR-V than Nissan Juke - but not quite Nissan Qashqai size. For this 'Mokka X' model range, British designer Mark Adams and his team tried to create a bolder look. This means a wing-shaped horizontal front grille and the dominant, sharp double-wing signature of the LED daytime running lights. At the rear is another double wing signature highlighted in the tail lamps, with LED technology an option. Vibrant new colours such as 'Amber Orange' and 'Lava Red' are also available. On the inside, the Mokka X has a smart dashboard inspired by the current Astra. In the back, the rear seats benefit from wide opening doors that simplify the fitment of a child seat, though that sharply rising waistline might restrict the view out for smaller occupants. As for luggage room, well, there's no high boot lip to negotiate and beyond it lies 356-litres of carriage space - about the same as you'd get in a MINI Countryman but 30% more than you'd get in a Nissan Juke.

Prices for this 1.4T AWD Mokka X start at around £27,000 -there's a premium of around £800 over the 2WD 1.4T variant. There are only two trim levels if you want the 4x4 set-up - 'Elite' or 'Elite Nav'. Standard equipment includes 18" alloy wheels, plus LED daytime running lights, front fog lights and silver roof rails on the outside. Inside the cabin, drivers will benefit from an 8-inch touch screen with Vauxhall's IntelliLink Infotainment system, as well as the innovative OnStar personal connectivity and service assistant. The two 'Elite' trim levels give you a full leather interior, heated front seats and steering wheel, plus tinted rear windows.

As far as cost of ownership is concerned, it would be fair to call this Mokka 'class competitive'. As you'd expect these days, a start/stop system is fitted across the range (though only on manual gearbox models) to cut the engine when you don't need it, stuck in traffic or waiting at the lights. As a result, the 140PS 1.4-litre petrol turbo 4x4 Mokka we've been looking at here manages up to 36.7mpg and up to 162g/km of CO2. What else? Well, to help you get somewhere close to the quoted fuel and CO2 figures on a day-to-day basis, there's an ECO section of the trip computer that includes a gearshift indicator, shows you fuel results over the last 30 miles and offers a graphical display that's supposed to encourage eco-minded driving. What else? Well, Vauxhall being a mainstream brand, residual values aren't as strong as, for example, you'd get from a rival Honda HR-V, but the Mokka X claws the advantage back with modest cost of options and very affordable servicing you can budget for with a range of pre-paid servicing plans. There's an unremarkable, but potentially extendable, three year 60,000 mile warranty.

There's a lot of promise about the Vauxhall Mokka X. It looks good, it's well equipped and it offers buyers a number of well thought out options. Some may be disappointed that pricing wasn't a bit lower and although the design is handsome, it's not what you'd call head turning. Still, it looks to be one of those car shapes that will age very well while more radical competitors date rapidly. Vauxhall has had the benefit of coming late to this compact crossover segment and has watched the market mature a little, shaking out some credible rivals along the way. All of them will have to take this car very seriously indeed, a design possibly at its most appealing in the 1.4-litre petrol turbo AWD form we've been looking at here. 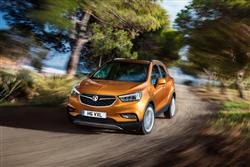 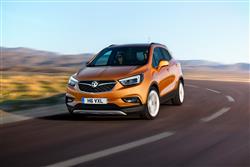 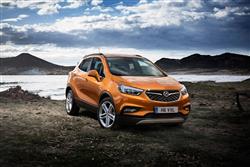 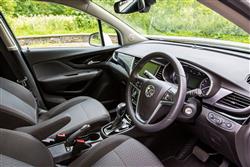