In the used vehicle part of the small car market, a segment that these days often headlines style over substance, the reality is that it's actually the most practical and affordable models that often sell most strongly. Models like this one, Vauxhall's Viva. This is the Korean-engineered modern-era version that sold to citycar buyers between 2015 and 2019. Parallels with older Vauxhalls bearing that badge are few but one thing remains the same: you get a lot of car for the money.

It's about time Vauxhall brought us a really credible super-affordable five-door citycar - and this is it, the VIVA. The name might be familiar, but the car is very much of its time, pitching the Griffin brand into contention in a segment that's doubled in size in recent years. Those of a certain age might well warm to this car right up front merely because of the badge on its bootlid. Vauxhall's original Viva models were made between 1963 and 1979 and transported a generation of budget-minded families. In reality, this modern Viva's origins owed more to Chevrolet than they did to Vauxhall for under the skin at launch in 2015, this Korean-built design was essentially a rebadged version of the MK2 model Chevrolet Spark that British buyers weren't offered. Still, Vauxhall reasoned that the market wouldn't care where this design came from as long as it was affordable, efficient, practical and offered plenty of style and frugal fun. On paper, the Viva seems to tick all these boxes. Its 1.0-litre ECOTEC petrol engine seems economical enough, there's modern connectivity for the Facebook generation and a little extra size over the citycar norm means that it ought to be practical too. A Viva Rocks variant was launched in 2017 with SUV-style styling cues. The Viva line-up was dropped from the Vauxhall range after the brand's takeover by the PSA Group, sales finally ceasing in 2019.

Vauxhall didn't need to make this model cutsey and cuddly. If that's the kind of thing you want from a citycar from this period, then the brand has its trendier ADAM model to suit. Instead, British designer Mark Adams and his team decided that this Viva should be a more sensible proposition, though still a very smartly turned-out one in a practically stylish sort of way, with a neat, precise design philosophy that, unlike some rivals from this time, isn't too gender-specific. Up-front, trendy design flourishes have been kept to a minimum. As we just suggested, those wanting something more outre and personalised will need to step up to the brand's trendier ADAM model and as usual in this segment, the kind of soft-touch plastics are noticeable by their absence. With all of that said though, this is one of the nicer-looking cabins in this sector from this period, and looks especially good with the two-tone fascia and stitched leather steering wheel of the top 'SL'-trimmed model. There are reasonably-sized door pockets and two drinks holders in the front centre console. Plus plenty of cubbies for squirreling away your personal belongings, with the small storage areas above the centre console and above the reasonably-sized glovebox being especially ideal for things like smartphones and loose change. Once you're settled, you might find that this isn't the easiest citycar to see out of: the stubby nose dives away out of sight and the narrow rear screen would make us want to seek out a car fitted with the optional rear parking sensors. Still, it's easy to get comfortable, despite the fact that the Corsa-derived three-spoke multi-function steering wheel adjusts only for rake not for reach. The seat is quite supportive - and height-adjustable as standard across the range. Ahead of you lies a simple but classy two-dial instrument cluster, with the main two gauges separated by a trip computer and chunky switchgear that operates with a solid click. Over to your left, a smart gloss black-trimmed panel surrounds the clear and neatly presented stereo, mounted nice and high up so you don't have to take your eyes off the road for too long to use it. Lower down on the central stack are the controls for ventilation and the air conditioning system you won't get if you opt for the frugal ecoFLEX model. Everything's simple to use and as straightforward to get to grips with as operating a payphone. And in the rear? Well this car is 140mm longer than something comparable like a Volkswagen up and has over 100mm more wheelbase length than you'd get in a rival like the shared Peugeot 108/Citroen C1/Toyota Aygo citycar design. These are differences you notice sat in the back of this car. The Viva's back seat offers enough room for a six-footer to sit behind a similarly-sized driver. Out back, there's a 206-litre boot that's about average in size for this class. True, it can't deliver the amount of space you'd get in models from this period like Hyundai's i10, Suzuki's Celerio or the Volkswagen up/Skoda Citigo/SEAT Mii shared design. But it's equal in size to the cargo area you'd find in the Peugeot 108/CitroenC1/Toyota Aygo shared design and similar too, to the trunk size provided by rivals like Renault's Twingo and Kia's Picanto. There are a couple of hooks to secure shopping and if you need more room, then pushing forward the standard 60/40 split rear bench reveals up to 1,013-litres, though the seats don't fold completely flat.

We found plenty of satisfied Viva customers, but inevitably, there were some who had issues. We heard a few reports of cars that consumed a lot of oil, so check service records for that. Some buyers complained of rattles. And two had to have new engines fitted after persistent faults. There were two manufacturer recalls during the production run - one for a driveshaft problem and the other for an issue with the handbrake. It'll be worth checking that the remedial work has been carried out. Otherwise, it's the usual things; insist on a fully stamped-up service history. Check the alloys carefully for parking scrapes. And examine the interior plastics for signs of general child abuse.

Power comes courtesy of a single 75PS 1.0-litre ECOTEC normally aspirated engine that's quiet, revvy - and faster than every other entry-level 1.0-litre petrol rival from this period, making 62mph from rest in 13.1s. The ride is firm, but supple enough over all but the worst surfaces. There's quite a lot of noise at speed but bodyroll's well controlled and the slick gearchange means you can enjoy getting the most from the little three cylinder twin cam engine. In town, a light 'City' option on the steering makes parking easy too.

Ultimately the basics just have to be right for a model in this segment - and here, most of them are. True, this isn't the most economical or the most spacious citycar you can buy from this period but it does enough in both of these areas to satisfy the needs of most buyers and does so at a price that makes many rivals look needlessly expensive. Okay, so the Viva badge unashamedly plunders a bit of retro appeal, but Vauxhall needed this car to be noticed. Unlike the company's flashier ADAM small runabout, there were no styling gimmicks or fashionable personalisation options to make it stand out in the showroom. Instead, the Griffin brand relied on buyers here to appreciate this car's common sense and no-nonsense approach to things. And the way that it had been equipped far beyond the level original customers might have expected it to be for the money. Ultimately, this was a contender bearing a British badge with German heritage from an American company in a design that's screwed together in Korea. Proving beyond doubt that even with tiny cars, manufacturers have to think big. 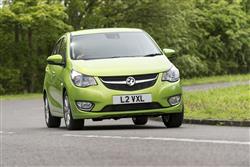 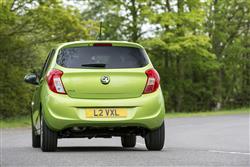 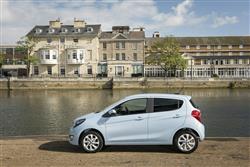 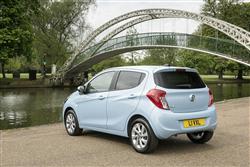 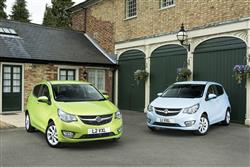 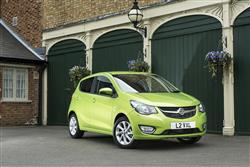