Volkswagen's Caddy van has always rewarded buyers looking for the largest breed of compact van with a quality feel and a depth of design engineering often missing from obvious rivals. Back in 2015, with a more efficient Euro6 engine range, this improved version of the MK3 Type 2K model added a very frugal set of running cost returns to the mix, along with sharper looks, extra technology and class-leading safety. As a result, if you're looking for something Citroen Berlingo, Renault Kangoo or Ford Transit Connect-sized from the 2015-2020 era, it's a difficult option to ignore.

Here's a van that's come a long way. Volkswagen's smallest LCV, the Caddy, has always provided a quality option for buyers seeking compact load-carrying business transport. In recent times though, rivals have been claiming that too. Hence back in 2015, Volkswagen's need for this improved version of the third generation Typ 2K Caddy model, a design that aimed to set benchmarks in efficiency, safety, convenience, comfort and technology. And yes, in quality too. For van customers, the Caddy name dates back to 1995, though back then, all this LCV really offered business buyers was the chance to own a Volkswagen Polo supermini with a metallic shed bolted on the back. In 2003 though, with this MK3 design, Volkswagen got serious, creating a smart all-new model based on underpinnings borrowed from its Golf and Touran passenger cars. The design was assembled in a purpose-built Polish factory and proved to be a huge success, the range quickly expanding to include an extended 'Maxi'-sized version as well as people-carrying 'Caddy Life' MPV variants. By 2015 though, it was clear that another step forward was needed, for by then, every rival in the compact van sector had substantially upped its game. Newer designs like Ford's Transit Connect and the Mercedes Citan, along with uprated versions of competitors like Peugeot's Partner, Citroen's Berlingo, Renault's Kangoo and Fiat's Doblo Cargo were all threatening Volkswagen's market share. Many of these were offering business buyers passenger car-style engine, infotainment and safety technology. Volkswagen had to respond. At first glance, their reaction to the way the LCV market challenged this vehicle might seem a little half-hearted. Look at little closer though and you begin to realise just how fundamental the changes to this fourth generation model really were. Here was a small van that could return over 65mpg, potentially park itself almost unaided and even brake itself to avoid an accident. All this from a vehicle still able to lug up to 735kg and fit in up to 4.2m3 of carriage capacity. A vehicle that could be specified to virtually drive itself on the motorway. And create for you a 'mobile office' wi-fi hotspot when stationary. In short, here we were talking of a new era in van technology. In this form, the Caddy sold until the fourth generation version arrived in mid-2020.

If at first glance, you're tempted to dismiss the styling changes made to this post-2015-era version of the third generation Caddy as being mere detail alterations, then Volkswagen is keen to put you right. True, not much about the overall look, feel or size of this vehicle was fundamentally changed as part of this facelift but examine this LCV a little closer and you begin to appreciate the sheer depth of thought that's gone into improving it. Here, we're looking at the conventional van version of this design but as before, there are also 'Caddy Kombi', 'Caddy Window van' and 'Caddy Life' variants that can offer various degrees of people carrying capability should you want that. The headlamps, radiator grille and bumper were redesigned as part of this update to form a distinctive horizontal band across the front of the vehicle, while the rising V shape that stretches from the grille edges to the base of the window aims to give the front of the Caddy a more striking appearance. Behind the wheel, the redesigned dashboard looks pretty similar to the previous one, but closer inspection reveals higher quality materials, strong build quality from the Polish factory, rectangular rather than circular air vents and, most importantly, provision for a 5-inch infotainment touchscreen just below the ventilation controls in the centre of the dash - often upgraded to a larger 6.5-inch 'Composition Media' display. What about the practicality of this Caddy? The doors are fractionally bigger than they were on earlier models, 1183mm in width and 1134mm in height, so most of what you want should go in, including a standard euro pallet. Inside, there's a completely level cargo floor with a load space width of 1,340mm, narrowing to 1,172mm between the wheel arches. There was no option for original buyers to specify a higher roof height, so all Caddys got 1,259mm of vertical space. That means a load capacity of 3.2m3 in this standard model. If you need more, then you'll need to be looking at the Caddy Maxi variant, which adds 470mm to the vehicle length, increases interior load length to 2,249mm and ups the load volume to 4.2m3. Size-wise then, most of what you want to carry will probably fit - but what about weight? Well, payloads in this post-2015 model are very similar to what they were before, ranging from 582kg to 735kg, with Gross Vehicle Weights from 2,135kg to 2,350kg. Want to load in from the side? Well, there's a standard sliding door on the left-hand side of the vehicle. This opening provides a loading width of 700m and a loading height of 1,097mm.

One of the advantages of this MK3 Caddy model's exceptionally long production run (going back to 2003) is that most of the design's problems had been ironed out by the time of the 2015-era facelift we're looking at here. In terms of reliability, the 2.0 TDI diesel has no major issues - but as with any mass produced powerplant, there'll will always be someone, somewhere who has a problem. EGR (Exhaust Gas Recirculation) valves are also known to fail. There may be issues with the DPF Diesel Particulate Filter on diesel models that have been used almost exclusively in urban conditions. Otherwise, it's just the usual things; check the load bay for undue scratching. And insist on a full service history.

On the move, the main change with this updated post-2015-era MK3 Caddy lay beneath the bonnet. A range of Euro6-compatible 2.0-litre TDI diesel engines replaced the previous 1.6-litre units and were offered in three states of tune. We wouldn't really recommend the feeble entry-level 75PS version, but the 102PS unit offers a decent turn of speed and, thanks to 250Nm of torque, has strong pulling power too: enough to tow a 1,300kg braked trailer. It's also reasonably economical: you're talking 61.4mpg on the combined cycle and 120g/km of CO2 (both NEDC figures). If you do want a pokier powerplant, then Volkswagen also offered a 150PS version of this engine. Avoid the entry-level diesel model and you also get the option of finding a Caddy with the brand's smooth 6-speed DSG auto gearbox. For the minority of business operators likely to want petrol power, Volkswagen also offered this Caddy with a range of TSI petrol engines. There was an entry-level 84PS 1.2-litre unit and a 102PS 1.0-litre variant. At the top of the range was a 125PS 1.4-litre powerplant.

This Caddy's predecessors set the benchmark for compact van design at the turn of the century. Just as this fourth generation model did in the 2015-2020 era. The Wolfsburg brand has always thought that operator preferences should lie in areas like efficiency, safety and technology, priorities this fourth generation Caddy addressed with class-leading thoroughness. That's not to say it can't be a practical choice. The 3.2m3 and 4.2m3 carriage capacities of the standard and Maxi versions are all most operators will need. And in summary? Well there are, it's true, bigger and more affordable vans than this one from the 2015-2020 era in the compact LCV sector. We reckon though, that most business buyers in this segment, most of the time, would rather have a Caddy. And that really says it all. 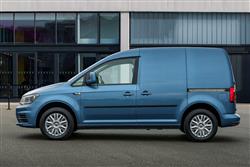 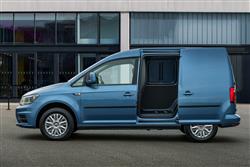 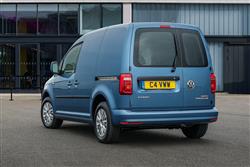 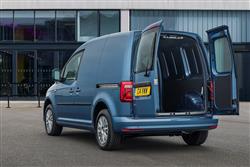 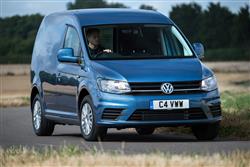 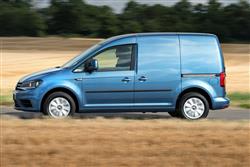