If you've ever got out of a Volkswagen Golf feeling you could do with a bit more space, the answer is right here in the chiselled form of the Golf SV. Here, back in 2014, the Wolfsburg brand at last brought us a proper, purpose-built family-sized five-seat MPV offering properly purposeful advantages to justify its premium over the standard hatchback model. It's Volkswagen's idea of what a Scenic or a C-MAX should really be and if you're buying in this segment from this ear and want something with a really quality feel, you could find it hard to resist.

Designing an MPV People Carrier needs to amount to more than just raising the roof height of a conventional family hatchback and giving it a different badge. Volkswagen knows that now after a sobering experience with their slow-selling Golf Plus model, launched in 2005 and updated in 2010. That car was supposed to be the brand's answer to five-seat People Carriers like Renault's Scenic and Ford's C-MAX, contenders that were successful because they were properly developed to offer families significantly more. Constrained by restrictive old fashioned turn-of-the-century underpinnings, the disappointing Golf Plus couldn't deliver that kind of proposition. Its replacement though, the Golf SV 5-seat people carrier that was launched in 2014, certainly could. The 'SV' moniker stands for 'Sports Van', a name the importers here understandably didn't much like, hence its shortening to a couple of simple letters. True, some utilitarian MPVs are little more than refurbished vans - Volkswagen's own Caddy Life model for example. This one though, is a long way from being an LCV. By the same token, it also sits some distance from sportiness. What buyers do get though is a proper five-seat compact MPV in the Scenic or C-MAX mould that borrows from its conventional MK7 model Golf stablemate but, thanks to the hi-tech flexibility of the Group's clever modern day MQB platform, doesn't have to sit on that car's restricted wheelbase. It's free-er, in other words, to do its own thing - just as, after purchase, Volkswagen hopes potential buyers will be. The niche here is an admittedly narrow one. If a standard Golf isn't enough but you still want something pretty compact, there's the Volkswagen brand's straightforward Golf Estate, their 7-seater Touran small people mover or the van-derived Caddy Life MPV we mentioned earlier. None of these cars though, have the dynamic style, flair and driveway cred necessary for widespread acceptance in the Scenic and C-MAX class. In contrast, the Golf SV has always claimed to offer exactly that. It's still not the largest car of its kind - but claims to be the classiest. The SV sold in its original form until early 2018, when it was updated with slightly smarter looks and a more modern range of petrol engines, plus upgraded safety and media kit.

Most Golf SV MK1 owners we surveyed were very happy with their cars, but inevitably, there have been those who have had problems you'll want to look out for. One owner reported squeaky noises coming from the suspension over speed humps. Another noted that his steering wheel made a slightly wheezy noise when going round bends slowly. There were reports of the boot juddering when closing. And fuel caps that were difficult to open, making re-fuelling a struggle. One owner reported vibration from the door cards at the front and the rear. And another reckoned that his infotainment system was choosing not to function in very cold weather - and at times, was choosing to control itself. As for mechanical stuff, well we came across one owner who'd had a clutch go after just 4,600 miles - but that's very unusual. Another experienced faulty injectors. And another experienced a power failure related to his DSG auto gearbox. Also look out for smearing wipers, problems with the cabin air blowers and a rattle from the gearbox over speed humps.

Surely this car can't handle exactly like the Golf hatch it's based upon? After all, it's got about 80mm more length and width, 120mm more height and it's about 120kg heavier. You'd have to notice all of that around the corners - wouldn't you? Really though, you don't. We're not saying there's no difference at all: you do get a touch more bodyroll through tighter bends, but in truth, it's not terribly significant. Or perhaps it's just that your mind is distracted from the issue by the surprisingly sharp way that this SV turns into the bends. Credit for this goes to a standard XDS electronic differential lock that automatically brakes the inner wheel through each tight curve just before it loses traction, sharpening turn-in and firing you from bend to bend. The rival Ford C-MAX uses a similar system and overall, remains a slightly more rewarding steer, though the differences aren't great. In fact, they're not very noticeable at all if you're able to stretch to one of the more powerful SV variants that could be ordered by original owners with a DCC Dynamic Chassis Control system that aims to very effectively deal with that touch of extra body roll we just mentioned. DCC offers specifically-tuned 'Sport' and 'Comfort' options, depending on how you want to drive, modes you select from the 'driver profile selection' system you'll find on all but the most basically-trimmed versions of this car - another welcome feature borrowed from the ordinary Golf. Without the DCC ride control package, this profile selection set-up's four standard settings ('Eco', 'Sport', 'Normal' and 'Individual') merely allow you to alter throttle response, steering feel, air conditioning efficiency and, on automatic models, gearshift timings. Still, even this is enough to change the character of your Golf SV to better suit the mood you're in and the road you're on. The other thing that fundamentally changes the character of this car is something over which owners will have less control. As it has with more ordinary versions of this Golf, Volkswagen (a little meanly) has decided to save a few pennies by equipping all mainstream versions with an old-tech torsion beam suspension set-up that can give you a bit of a fidgety ride at low speeds over poor surfaces. To avoid this and get a proper modern multi-link system like the one you'd find across the range in, say, a rival Ford C-MAX, you have to stretch to the very pokiest petrol or diesel Golf SV variants. That's a little disappointing, but the engine range on offer isn't. The two powerplants we just referred to (the only ones that from new could be ordered with that DCC ride control system) offer 150PS, buyers choosing between either a 2.0-litre TDI diesel or a 1.4-litre TSI petrol unit. Of the pair, we'd always go for the diesel, primarily because you don't have to have it in a pricey top 'GT' trim level that forces you into a car with an unnecessarily firm suspension set-up. In any case, the 2.0-litre TDI isn't even much slower than its direct petrol equivalent, the 9.2s 0-62mph showing less than half a second tardier. Both cars max out at 132mph. Most Golf SV customers though, won't need that kind of performance. From new, nearly all of them plumped for the 110PS version of its trusty 1.6-litre TDI diesel. You can see why this variant was so popular, this base diesel unit offering a persuasive blend of decently perky performance and 70mpg efficiency. In one of these, you can expect 62mph from rest to occupy 11.3s en route to 119mph, though we should point out that these are figures only just superior to those returned by the 90PS version of this same engine. The other powerplant choices are all petrol-driven and continue the all-turbo theme. A couple of 1.2-litre TSI units prop up the range, respectively developing either 85 or 110PS. Personally, we'd avoid these. The feebler variant (which takes over 13s to get to 62mph) will quickly run out of puff when your Golf SV is heavily loaded. The pokier one cuts that time by over 2.5s, but there's not much point in buying it because for only a little more, you could get yourself a bigger-capacity 1.4-litre 125PS TSI petrol engine that's a more satisfying choice all round. Here, the 62mph sprint takes 9.9s on the way to 124mph.

If you think you'd need a very good reason to buy a compact MPV with fewer than seven seats, you might like the Golf SV. It offers a range of very good reasons. The class, style and quality on offer here are certainly very tempting compensations for the absence of those extra chairs. And if you have decided that you can do without the additional pews, an SV certainly stacks up very well against the other potential five-seat solutions on offer for families seeking more flexibility than an ordinary Golf or Focus family hatch could offer. Do you really want the mundanity of an estate or a converted van, the rather self-conscious funkiness of a Qashqai-style crossover - or the maternity unit practicality of, say, a Scenic or a C-MAX? Here's a slightly different way to go. A proper Golf that is also the kind of proper People Carrier its Golf Plus predecessor never was. True, other five-seater MPVs from this era can offer you slightly more space and seat-fumbling flexibility, but the incremental benefits they deliver aren't really very significant. Overall, this is a car that adds a dash of desirability to the business of owning what is, at the end of the day, nothing more than a practical family tool. The result is a car you could be proud of. 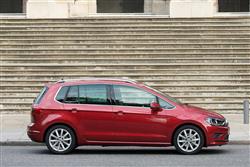 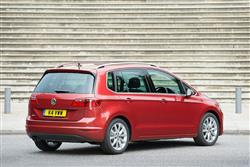 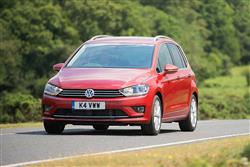 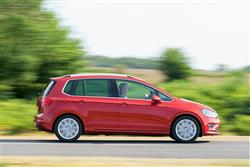 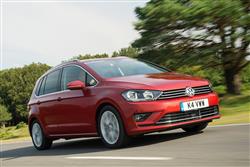 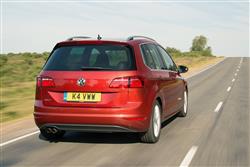