The Volkswagen Golf GTI wears one of the most iconic badges around and this post-2012 Mk7 model proved to be a class act. It was bigger, quicker, better built and more efficient than its predecessor, offering a choice of three doors or five, standard or 'Performance Pack' models and manual gearbox or DSG semi-auto transmission. This car proved to be the best all-rounder from its era in the hot hatch division. But does it make sense on the used market?

Before Volkswagen dreamed up the Golf GTI, there was no such thing as a 'hot hatchback'. Today of course, the phrase has entered everyday parlance and virtually any manufacturer that has a hatchback also has a hot one - or a warm one at the very least. It was 1976 when the original version of this car was born and since then, through continual generations and with the help of countless imitators, it has brought performance, handling and fun to the masses on an unprecedented scale. The Golf GTI we look at here was the mark seven version and claimed to be the best yet at its original launch in 2012. But did that mean 'best of breed' or 'best in class'? This car, after all, may define the hot hatch genre but prior to 2012, it had rarely been recognised as the most accomplished car in its sector. In fact, to be brutally honest, there have been some distinctly average Golf GTI models over the years, the low point reached in the Nineties with unremarkable third and fourth generation models. All that changed though, in 2005 with a completely re-developed fifth generation version that also lent its platform and most of its 2.0-litre turbo mechanicals to the slicker MK6 design that followed in 2009. For the first time since the Seventies and early Eighties, a hot Golf was a credible driver's choice once again. By 2012 though, Volkswagen's iconic shopping rocket was beginning to be overtaken by a whole host of rivals, all of whom offered more firepower and greater technical superiority. Another big step forward was called for - and this seventh generation Golf GTI claimed to represent exactly that. Wolfsburg's hi-tech MQB platform made it lighter and more efficient, there was hi-tech suspension and steering, plus extra power up-front (220PS) along with the option of a pokier Performance Pack (boosting output to 230PS) if that wasn't enough. A rorty three-door GTI Clubsport S version with 310PS was launched in 2016. And the standard GTI was facelifted, along with the rest of the Golf range, for the 2017 model year, an update that boosted power of the standard model to 230PS and that of the 'Performance Pack' variant to 245PS. In 2018, the standard 230PS model was phased out and only the 'Performance Pack' variant remained until the end of the production cycle in 2019.

Most Golf GTI MK7 owners we surveyed were very happy with their cars, but inevitably, there have been those who have had problems you'll want to look out for. One owner reported squeaky noises coming from the suspension over speed humps. Another noted that his steering wheel made a slightly wheezy noise when going round bends slowly. There were reports of the boot juddering when closing. And fuel caps that were difficult to open, making re-fuelling a struggle. One owner reported vibration from the door cards at the front and the rear. And another reckoned that his infotainment system was choosing not to function in very cold weather - and at times, was choosing to control itself. As for mechanical stuff, well we came across one owner who'd had a clutch go after just 4,600 miles - but that's very unusual. Another experienced faulty injectors. And another experienced a power failure related to his DSG auto gearbox. Also look out for smearing wipers, problems with the cabin air blowers and a rattle from the gearbox over speed humps. There have been a few reported issues with the DSG auto gearbox, so make sure the gearbox changes properly. Timing chains have been known to snap prematurely and cause major engine damage - yet another reason why a full service history is critical. GTI models can also suffer from quite high oil consumption, so it's important to keep an eye on the oil level, to avoid damage to the engine or timing chain.

When the Golf GTI was first launched in 1976, Volkswagen wondered whether it would struggle to sell an early production run of 5,000 vehicles. By 2012, two million sales later, the issue the issue the brand faced was not whether this car would sell, but who might buy it. After all, previous to 2012, this model had mainly sold to folk who, if they were honest, would probably admit to having out-grown the shopping rocket genre it originally created. In 7th generation form, this car needed to return a little to its roots - add an old fashioned dose of fun into the mature mix. It did. You might not know that from the figures. In all the dynamic measures that tend to matter to hot hatch drivers - 0-62mph acceleration, top speed, lap times, lateral grip, braking performance and so on - this Golf never really seriously bothers the class best. You might not be immediately arrested by the looks either, or the initial experience on the drive round the block. But persevere. Forty years of experience in creating a car of this kind has to count for something. It does. Importantly, Wolfsburg didn't here make the mistake of developing this GTI for the track rather than the road, so bumpy British tarmac doesn't bother it. You're always confident in pushing the performance envelope in a way that few rivals can match, yet that's possible without the sweaty palms that usually characterise red mist motoring. MK5 and MK6 Golf GTI models were also accomplished in this way, but with its extra power, lighter lithe responses and brilliantly sorted suspension, this MK7 version can not only be a confident performance car but a credibly exciting one too. So yes, it should sell to folk who want a proper hot hatch experience as well as a very mature one. The very first generation version set out to define a fundamental standard for performance that was more precise than any other compact car. So it is here. Long after the novelty of some rivals has worn off, this GTI will always feel a class act. Crucially though, in this form, it's also a very entertaining one. 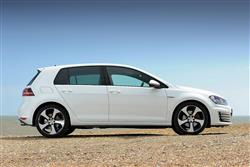 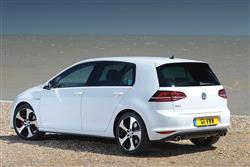 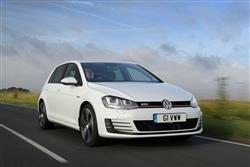 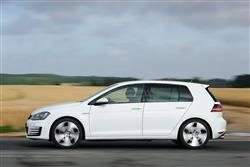 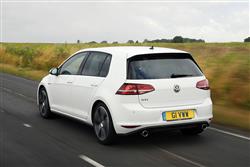 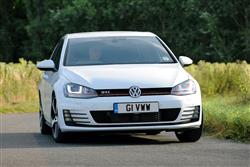