The improved post-2014 version of Volkswagen's modern-era Scirocco coupe is the beautifully designed, solidly built and super-stylish affordable coupe it always was. Crucially though, the enhanced facelifted version we're going to look at here as a used buy featured a more efficient range of more powerful engines, along with some subtle changes that lifted its desirability up a notch or two.

In launching the original version of its Scirocco coupe, Volkswagen was said to have 'democratised the sportscar'. When in 2014, it introduced the improved third generation version were going to look at here, the brand hoped to have redefined that original recipe. The name refers to a hot wind that blows from the Sahara desert to the Mediterranean and designates a model line actually pre-dating that of the Golf, with a history stretching all the way back to 1974 when this car marked a new era for front-engined, front-wheel drive Volkswagens in Europe. It was certainly very different from the rear-driven boxer-engined Karmann Ghia model it replaced, though not much faster, early versions offered with as little as 60bhp. The iconically-wedgy Giugiaro styling looked good though, which was all most buyers cared about. Less memorable was the second generation version launched in 1981, though at least by now, more powerful engines were featuring beneath the bonnet. The launch of the smaller Corrado coupe in 1989 spelt the end of the first phase of Scirocco history but loyal owners never forgot it and in 2008, the badge was back on the pretty tailgate of the third generation version we're looking at here. This time round, style really was mixed with substance, the shape based on an 'Iroc'-badged concept car that had wowed the crowds at the Paris Motor Show a couple of years before. Like its predecessors, this Scirocco was Golf-based - or more specifically, Golf GTI-based, given that early models could only be ordered with the 2.0-litre turbocharged engine from that car. In time though, the range gained more affordable petrol versions, a selection of diesels and, in 2009, a potent 265PS flagship 'R'-badged variant that at launch, was one of the fastest contenders in its class. All of that was enough to keep Volkswagen well-placed in the affordable coupe segment for some time, but by 2014, this MK3 model was at last beginning to show its age. Not in terms of its looks - the shape still turns heads. When it came to technology and efficiency though, an update was clearly needed to keep the car current in the face of competition from rivals like Peugeot's RCZ, Vauxhall's Astra GTC and the Volkswagen Group's other contender in this sector, the SEAT Leon SC. Hence the higher trim levels and lower running costs of this updated version, a car also improved with a subtle restyle. It sold until late 2017 and wasn't replaced.

Barstool experts not seduced by this car's fashionable finery will be quick to dismiss it as a Golf in a cocktail dress, but that's a simplistic summary given that a Scirocco is 93mm shorter, 11mm wider and sits 52mm lower. It's also got a much wider track, a significantly lower centre of gravity and a substantially different suspension set-up. Yes, the engine range is largely shared, but in almost every other respect, this Volkswagen coupe is very much its own car. Raise the hatch and a 312-litre cargo area is revealed, 30% more than you'd get in a Toyota GT86 for instance and a decent amount for a car that looks as stylish as a coupe should. Up-front, not was done with this facelifted car to update the driving environment, which might make it feel a little dated to those familiar with one of the Volkswagen Group's more recent designs. Probably the biggest change up-front with this facelifted version was the addition of a pod on top of the dash, apparently an aesthetic reference to the similar set-up used in sporty versions of the first generation Scirocco model. It certainly makes the cockpit feel a little more purposeful, briefing you on oil temperature, turbo boost and chronometer functions.

On the 2.0 TDI diesel version, it's apparently common for the front tyres to wear down very quickly. In fact you should expect no more than around 15,000-17,000 miles from the front tyres. Keep an eye on the front tyre wear and make sure that the tread doesn't go lower than the legal limit of 1.6mm. Another potential diesel variant issue lies in the way that on some cars, the DPF (Diesel Particulate Filter) warning light occasionally illuminates on the dashboard. This happens when you drive the car around town, as the DPF doesn't heat up enough to burn off the unwanted particles. To solve this problem you will need to take the car onto the open road like the motorway or the A-road and, drive at around 50-60mph in third gear for about 15 minutes to burn off these particles. This should turn off the DPF warning light on the dashboard. If this doesn't work, you will need to replace the DPF, changing the oil and oil filter at the same time. If you notice that the engine on the Scirocco you're trying is running very poorly and is very hesitant or jerky, there's most likely an issue with the spark plugs - a known problem with this model. They'll need replacing in that case. Another known Scirocco issue is malfunctioning steer8ing wheel switches, which is caused by a fault with the airbag. You will need to get the airbag problem fixed to resolve the issue. Get a specialist to look at it before changing anything. It's common on Sciroccos for the glove box lid to prematurely fail. You may notice that it doesn't close properly, or rattles when closed.

Not much changed with this improved Scirocco in terms of the driving experience it can offer. To be honest, not much needed to. This Scirocco gets a proper supple rear multi-link suspension system right across the range, which is why it rides so much better than a lower-order Golf. You get that set-up even on the feeblest version, that with 1.4-litre TSI petrol power, an engine Volkswagen wisely didn't try to mate with the sprint-sapping 6-speed DSG automatic gearbox that was an option across the rest of the line-up. Stir the stick yourself in a Scirocco 1.4 and 62mph can be reached in 9.2s en route to 126mph. For performance that better suits the looks of this car though, you'll need a 2.0 TSI petrol variant, possibly the 180PS version that manages the 62mph benchmark in 7.4s on the way to 141mph. But more probably the 220PS derivative with its Golf GTI engine. Here, the at-the-wheel experience is much more satisfying, 62mph occupying 6.5s en route to 153mph. There was also a 210PS GTS variant. Either way, you get a level of performance that might make you question the necessity of paying the vast premium required for ownership of the flagship Scirocco R model, which uses the same 2.0 TSI turbo engine but boosts its power to 280PS, 15PS more than this top variant offered in pre-facelift form. Once you've made your engine choice, you'll settle into Scirocco ownership much more quickly if you appreciate that this isn't really a back road brawler: buy a hot hatch if you really want that. Yes, you can take it by the scruff of the neck and throw it about if you really want to, but the car responds best to smooth inputs and is in its element on fast, flowing A-roads, terrain that tends to mask the rather benign feeling delivered via the electro-mechanical steering. If you're in a DSG version with its slick steering wheel paddles, you can quickly get into quick, rewarding driving rhythm. For many, this is exactly what a rapid, affordable coupe should feel like.

The Volkswagen Scirocco was a formula that didn't need wholesale changes and with this MK3 model product update, it didn't really get them. The under-bonnet updates were well worthwhile though, offering more power across the board teamed with greater efficiency. In summary, if you want a coupe that looks good, is well screwed together and which isn't going to cost a fortune to run, Volkswagen has your back here. Thankfully though, this car also offers something a little more than that. Call it charisma, call it personality, call it what you want: the Scirocco has it. 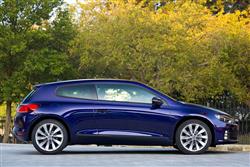 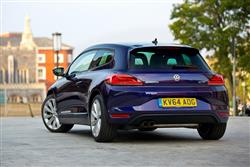 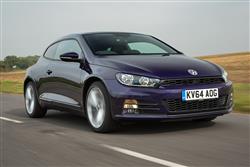 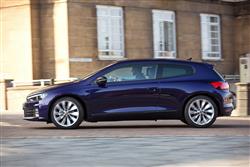 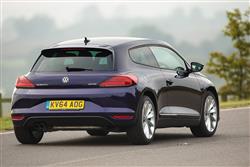 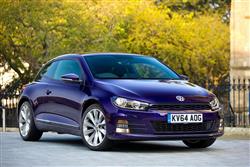