Available at Volkswagen branches
From £33,998
£1500 Deposit
£547 Per month
Finance your car with PCP
Enquire now

In its second generation 'AD/BW'-series form launched in 2016, Volkswagen's Tiguan mid-sized SUV proved to be a much more sophisticated thing - as it needed to be to take on a wide array of Crossover and full-SUV-orientated rivals. Sharp looks are matched by sharp dynamics and a more sophisticated 4WD system that makes this car a more credible tool when the going gets rough. There's a classy cabin too and as a result, this car feels just that bit more complete than many key rivals.

It's easy to forget now that for quite a time, the Tiguan was the only SUV that Volkswagen offered. That's one reason why the first generation '5N'-series Tiguan model sold and sold well, shifting over 2.8-million units in a production cycle that ran between 2007 and 2015. By the time this second generation 'AD/BW'-series model was launched in 2016 though, Volkswagen was getting with the programme, widening its SUV line-up and making the MK2 Tiguan available in standard and long wheelbase 'Allspace' forms. This provided for a range of derivatives that aimed to offer a variant for almost everybody, both for customers merely wanting something that looked like an SUV, or for the kind of customer who regularly needed to go off road. It was a wide-ranging brief this MK2 Tiguan delivered on pretty well. Here, we'll be looking from a used buying perspective at the original pre-facelift versions of this 'AD/BW'-series second generation car - in its standard body shape. This sold until mid-2020, when it was facelifted and significantly updated.

Volkswagen's Head of Design Klaus Bischoff describes the look of this second generation Tiguan model as 'highly passionate'. Perhaps it is - in a very German sort of way. It's certainly an intricately fashioned thing, cut like a diamond with super-sharp slashes and creases. And in MK2 form, this car was bigger than before, 60mm longer and 30mm wider, though the height was reduced by 33mm to create a lower, leaner stance. More important though of course, is the stuff you can't see, specifically the stiffer, more sophisticated Golf-style MQB platform underpinnings that lie beneath the precise, carefully contoured lines. This hi-tech chassis was fundamental in the creation of this slightly bigger, significantly lighter and more sophisticated car that, as we'll see, also uses its interior space more efficiently than its predecessor. You certainly appreciate this from behind the wheel, but what's even more evident from the moment you slide into the hip-height seats is that this Tiguan has broken rank with the Qashqai-class models it used to compete with and can now offer properly premium class quality. What you'll also notice is the huge step forward in media connectivity that this second generation model delivered over the MK1 Tiguan - the whole 'cool, calm and connected' thing from the ads. An 8-inch infotainment screen dominates the centre stack on all models - on some cars, you'll find this upgraded to the 'Discover Navigation' system that was fitted as standard to plusher variants and was optional lower down the range. Whatever display you find fitted, the touchscreen effectively deals with the usual DAB stereo, Bluetooth 'phone and car informational functions and with virtually all trim levels is embellished with Volkswagen's clever 'App-Connect' set-up. This is the starting point for the brand's 'Car-Net' connectivity system and the key tool for bringing the best functions of your smartphone into your Tiguan via the 'Apple CarPlay', 'Android Auto' and MirrorLink systems. What's even cleverer is the potential that Volkswagen's designers created for much of this information to be brought directly into your line of sight courtesy of an option many original owners had fitted - the 'Active Info Display'. We're getting used to this kind of thing from various brands now, a 12.3-inch TFT screen that completely replaces the conventional instrument binnacle dials with an almost infinitely customisable layout of crystal clear virtual graphics The back seat is the area of the car where you most appreciate the benefits of this MK2 model's extra 26mm of interior length - there's 29mm more knee room on offer than with the previous model and the flexibility to further improve things by using a sliding rear bench. And the boot? Well because the load sill was lowered with this MK2 design, it's slightly easier to get bulky loads in and out. The hatch rises to reveal a spacious 520-litre boot.

Most Tiguan MK2 owners we surveyed were very happy with their cars, but inevitably, there have been those who have had problems you'll want to look out for. We came across a few issues with the DSG auto gearbox. Another owner reported faulty electric and various faulty sensors, plus problems with the GPS system. Apart from that, check for the usual things - interior child damage, scratched alloys etc. It's unlikely that any Tiguans will have been serious used off road but check the underside of 4MOTION variants just in case. And of course insist on a fully stamped-up service history. There were quite a few product recalls during this original MK2 model's lifespan too, so check that the car you're looking at has had the appropriate dealer visit for rectification. Recalls were issued for models made between August and November 2016 (an issue with the front seat backrest frame); for Tiguans made between October 2018 and May 2019 (problems with low speed engine torque); for Tiguans made in February 2019 (cracks in the front left seat frame); for cars made between May and October 2016 (problems with airbags and seatbelt pre-tensioners); for cars made between May 2016 and November 2018 (issues with the tow bar locking mechanism); for cars made in January 2018 (front brake disc cracking); for Tiguans made in October 2019 (fuel tank wall thickness issue); and models made between May 2016 and June 2019 (a roof spoiler issue)

The dynamics of this Tiguan were usefully improved for this MK2 model thanks to the installation of a lighter, stiffer hi-tech MQB platform that allowed the engineers to reduce body roll without the need for an unpleasant, over-firm ride. Buyers in this country have a preference for ordering this car with 4MOTION 4WD, so Volkswagen enhanced that system and added in a '4MOTION Active Control' set-up that allows you to tailor the working of the all-wheel drive system to more specifically suit conditions both on and off the beaten track. It's one of the things that makes this car surprisingly good off road. Under the bonnet, the range is primarily based around 2.0-litre TDI engines, with buyers offered a choice of 115, 150, 190 or 240PS outputs. Most customers opt for the 150PS mid-range variant which from new could be had with or without the 4MOTION system or the DSG automatic gearbox. Obviously going without both elements and sticking with 2WD and manual transmission will give you the best efficiency figures, which in the case of the 2.0 TDI 150PS variant are 57.6mpg on the combined cycle and 125g/km of CO2 (both NEDC figures). If you must have a petrol model, there are a couple of 1.4-litre TSI options, plus a 2.0-litre TSI unit with 180PS.

It's not hard to see why the Tiguan is such a popular choice in its sector. There's the potential to get all the quality of a premium-badged mid-sized SUV, for the price of a budget brand contender. You get the tarmac handling ability of a Qashqai-like Crossover, yet at the same time, get the option of virtually all the off road ability of something more capable. And the whole package comes with the enduring appeal of that Volkswagen badge - and the enduring residual values that'll go along with it. In summary, what ultimately matters is that this product is good enough to meet its wide-ranging and very difficult brief. It says much that there really is something in Volkswagen's claim that, to some extent at least, this MK2 Tiguan model subtly re-defined what a car of this kind should be. We can't pay it any greater compliment than that. 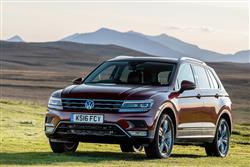 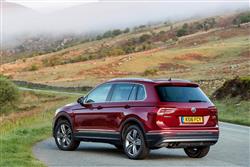 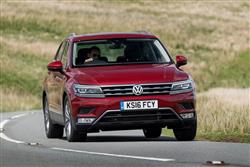 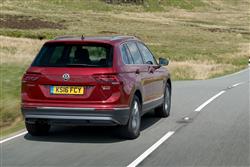 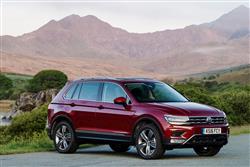 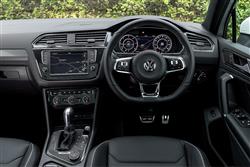