Volkswagen's much improved post-2014-era second generation Touareg is a large luxury SUV that's dynamically better than you expect it to be, both on road and off it. True, it can't offer more than five seats, but then neither can key rivals from this era like BMW's X5, Mercedes' GLE-Class, Jeep's Grand Cherokee, the Lexus RX or Porsche's Cayenne. If you're looking at one of those contenders in this segment, then this under-rated Touareg offers a very complete package with a used value proposition that could prove hard to resist.

Large luxury SUVs tend to be more about style than substance. Here's one that's different, the much improved post-2014-era version of Volkswagen's second generation Touareg. If you're searching for a large, plush 4x4 of this kind, convention suggests that there are really only two main buying options. On one hand, it's possible to prioritise style and on-road driving dynamics with something like a BMW X5 or a Mercedes GLE-Class. Or, taking the opposite perspective, you might prefer to put off road capability first and get yourself something more capable but a little clunkier - say a Toyota Land Cruiser or a Jeep Grand Cherokee. But does it have to be like that? After all, few of us like to be pigeon-holed in our buying preferences and a contender in this class truly able to offer the best of both worlds ought to be very welcome. That's always been the appeal of this Touareg, striking as it does a very appealing compromise when it comes to looks, tarmac capability and off piste prowess. The first generation version of this car, launched back in 2003 and thoroughly updated in 2007, satisfied plenty of people and also formed the base for sister brand Porsche's hugely successful Cayenne model. This second generation Touareg, a car we first saw in 2010, also shared its underpinnings and mechanicals with the Cayenne but initially attracted much less of a following, despite being lighter, sleeker and better equipped than its predecessor. So in the Summer of 2014, Volkswagen introduced the much improved MK2 model Touareg we're looking at here as a potential used buy, a car that claimed to be safer, smarter and more efficient.

At its original launch in 2010, one of the most impressive things about this second generation Touareg was the way that its designers managed to make what was a significantly bigger car look significantly smaller. This improved second generation Touareg design stayed on-message with this current trend, a leaner and slightly more cohesive look disguising the fact that it was actually a little longer and wider than before, 6mm longer and 68mm wider. It's still got an imposing kerbside presence though, thanks primarily to a redesigned front end featuring larger Bi-xenon headlamps that flank a deeper, more stylish chromed radiator grille with four rather than just two horizontal fins. Compared to the original MK2 model, there's a re-profiled bumper too. Inside the boot, there's 580-litres of luggage space on offer, more than you get in a rival Lexus RX. It makes it all the more surprising that the designers of this Touareg chose not to offer the extra fold-out third seating row you'd get in direct competitors like Audi's Q7, Volvo's XC90 and the Range Rover Sport. Perhaps the Touareg development team were concerned that adding such a feature might compromise the room available for rear seat folk. There's plenty of space for heads, legs and knees, particularly if you take advantage of the fact that the seats recline for greater comfort on longer journeys. And use the facility to prioritise either leg or luggage room by sliding the rear chairs back and forth. Up front, though there's the usual commanding SUV driving position, though it doesn't deliver quite the all-round vision you'd get in, say, a Range Rover or a Land Rover Discovery because this Touareg's window level is that little bit higher. As previously in this car, there are supportive six-way-adjustable heated leather seats with lumbar support that position you perfectly in front of a thick three-spoke leather-trimmed multi-function steering wheel that of course you can tailor for both reach and rake. The centre of the dash is, as you'd expect in this class of car, dominated by a large infotainment touchscreen. All the usual accoutrements then, of 21st century motoring.

The Touareg hasn't earned a faultless reputation for reliability, with Volkswagen's warranty department paying out for brakes and fuel system claims. Market research firm J.D. Power, meanwhile, gave the 2012 version of the Touareg an "about-average" grade for overall quality, and "worse-than-average" grade for predicted reliability. Our ownership survey revealed a few issues. Propshaft failure is common at around every 70,000 miles. Make sure the propshaft bearings have been replaced on higher mileage examples and this will prevent premature failure. Also the auto gearbox is sometimes prone to failure. Check for smooth sifting from 4th to 5th and back down for signs of wear. Although the build quality is great, some of the dashboard plastic are a little less premium compared to other premium SUV products, so check that all switches and intricate bits operate properly. The Touareg owners forum site - www.mytreg.com - will help with further info.

You tend to approach a drive in a two-tonne luxury SUV with certain preconceptions - two in particular. There'll be a luxuriously commanding high-set driving position - which is certainly the case here. And the car will be heavy and ponderous when it comes to twisty roads - which is where this Volkswagen has a few surprises in store. No, it's not BMW X5-like in its ability to iron out the bends on a twisty B road but it's far more capable on the tarmac than you'd ever expect a vehicle to be that can handle wilderness trails the Bavarian model couldn't even think about attempting. All Touaregs from this era get 3.0 V6 TDI power, this diesel unit solely matched to permanent 4WD and an old-school eight-speed tiptronic automatic gearbox. This engine comes in two states of tune: there's an entry-level 204PS version with 450Nm of torque that manages 62mph from rest in 8.7s on the way to 128mph. And the powerplant over 80% of buyers here chose, the 262PS unit with a thumping 580Nm of torque. Whatever Touareg you choose, the ground clearance and climbing ability you get can be dramatically improved if you get a car whose original owner specified the optional air suspension system. This gives you a selectable, higher 'Raised' mode that can set your Touareg as much as 286mm off the deck. For most, the straightforward '4MOTION' 4WD system you get on the standard models will be more than sufficient for the slippery stuff. With this, once you're off the beaten track, you simply twist a rotary dial by the gearstick into the designated 'Off Road' setting. This tunes the ABS braking, the EDS differential and the ASR anti-slip regulation traction control for 'off piste' duty, while at the same time activating Hill Descent Assist and adjusting the automatic gearbox change points.

As long as you don't need seven-seats in your large used luxury SUV from the 2014 to 2017 era, this improved second generation Volkswagen Touareg is hard option to ignore if you're looking for an appealing balance between style, speed and 'SUV'-ness, with reasonable pricing and running costs that suggest more modest means. True, it doesn't have the brand cachet of some of its illustrious rivals - but perhaps that's no bad thing. For this car's loyal band of buyers, the Touareg's unpretentious approach is, after all, one of its biggest draws. It's a pity though, that so few of them know exactly how capable it is in the rough stuff. As for the updates made to this improved second generation model - the greater efficiency, the extra safety, the new technology and the smarter look - well all of it was welcome and usefully enhanced this Volkswagen's appeal in its class. Your choice in this segment can be both quick and capable. And pretty stylish too - on any terrain. Try this car - and you'll understand how. 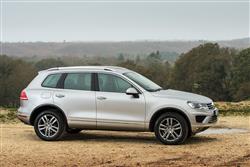 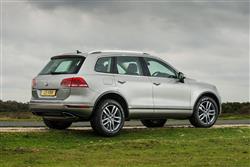 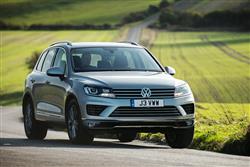 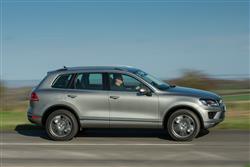 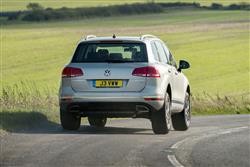 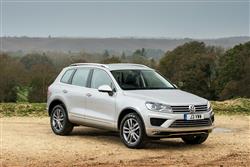