Volkswagen's second generation Touran was launched in 2010, designed to compete with the best that the compact 7-seater MPV class could offer. Underpinnings from a MK6 Golf hatch brought with them highly efficient engines that complemented neat design and general quality that in this era couldn't be bettered in the Scenic and C-MAX sector. You might think that ought to make it a good used car buy in you're in the market for a compact People Carrier with three-row seating. But will it be? Let's find out.

Volkswagen really should be good at MPVs. It has, after all, been making the things for well over sixty years. Just after the war, a British Major, Ivan Hirst, was appointed to run the Wolfsburg factory and needed a simple, yet spacious vehicle to get things around the plant. The result was the Transporter, launched to the public in 1950 and changed little during the next quarter of a century, during which we saw it as anything from a hippie campervan to a practical minibus - a true Multi-Purpose Vehicle. Though the Transporter continues today in people carrying Caravelle form, today's volume Volkswagen MPV is somewhat smaller - this car, the Touran. This car was first introduced in 2003 but here, we're looking at the second generation version, launched in 2010 when it slotted in beneath two larger MPV models in Volkswagen's range, the Sharan and that aforementioned Caravelle. Though the size of a Touran might not suit people who've qualified for their own private parking bay at the maternity ward, for most families most of the time, it turned out to be about right, positioned directly against rivals like Vauxhall's Zafira and Renault's Scenic at the larger end of the compact-MPV sector. This MK2 model sold until 2015 when Volkswagen introduced a not too dissimilar MK3 model.

Stylistic surprises are rarely forthcoming when Volkswagen unveils an MPV and so it was that in second generation form, this Touran borrowed further from the design language already used by its maker on everything from a Polo supermini to a People Carrying Sharan. With this MK2 model, the German designers managed the unusual feat of changing every body panel bar the side doors, while still creating a look that nonetheless, appeared broadly the same as this car's predecessor, if cleaner and more purposeful at both front and rear ends with a sleek 0.29 drag factor. It was much the same inside, where everything was changed - yet nothing was different, exactly as many satisfied owners wanted. So buyers graduating from the previous generation version got restyled dials, a smarter three-spoke height and reach-adjustable steering wheel and a revised switchgear layout for the climate and entertainment functions. But the same classy cabin that ignored the fancier approach favoured by rivals and worked much better for it. At the business end, Volkswagen's marketeers rather ambitiously promised 'over 500 different combinations of seating'. You may disagree. Access to a cabin that gains plenty of light from the large windows is via side doors that, unlike some obvious rivals, open conventionally rather than sliding back and forth. But sliding back and forth to optimise legroom is certainly something you'll be able to do in the three individual chairs that make up the second seating row, positioned relatively high so children can see out of the bigger windows more easily. Unlike the larger Sharan, these seats can't neatly fold into the floor when you're not using them. For maximum carriage capacity, you have to carry them out and store them in the garage, so it's just as well that at 17kgs, they're not too heavy. When in situ in the car, they do fold in half though and the advantage of that if there are only two people in the back is that the middle seat can create a useful centre table. Or you can take it out completely and slide the outer two seats sideways and inwards to create limo-like elbow room. Neat. Behind, there are a couple of extra third row seats, adequate for occasional use by smaller adults over short journeys but really designed for children. Some original buyers deleted these at the point of original ordering in order to create more bootspace. Talking of bootspace, there really isn't much - just 121-litres. If that's a problem, you really should be looking at a proper large 7-seater MPV like Volkswagen's Sharan. Still, with the 3rd row folded into the floor, you do get 695-litres if space - or as much as 1989-litres if you fold the second row seats in half, with more again on offer if you lift them out completely. Just as important for families are the various storage compartments dotted around the car for smaller items - 35 in total - including storage compartments in the floor and in the roof console, trays under the front seats, a lidded compartment on top of the dash, door bins that will accommodate a 1-litre bottle and more cupholders than you'd find in the Real Madrid trophy room.

Volkswagen's reliability is usually very good and the engines used by the Touran also do service in a great number of other vehicles with no major reported issues. True, there were three service recalls with the previous generation Touran, but all were for minor problems. Owner reviews are mostly positive with very few complaints. Mechanically, the Touran seems to be strong. In fact, the only pattern we could find in owner complaints related to electrical issues - and these mainly concerned older cars. Make sure you thoroughly test all such controls to get a handle on any potential issues. As with all MPVs, inspect the trim carefully for signs of child damage and spillages. Kerbed alloys caused by distracted parents are common.

(Based on 2014 model 2.0TDI) A new clutch should cost around the £150-200 mark, while individual dampers go for around the £50 mark. In other words, unless major parts fail, this Touran shouldn't be too expensive to keep on the road. Obviously, you'd pay more if you had your vehicle serviced at a Volkswagen franchise.

Though not quite SUV-like, the driving position is slightly higher than you'd find in an ordinary hatchback, offering a better view both of the road ahead and around the glassy cabin - which certainly makes parking easier. Otherwise, the driving experience is much as this car has always served up, solid, reassuring, if not especially rewarding. One example of the attention to detail lavished in this area is the so-called 'intelligent' power steering, which varies the feel and feedback it gives to the driver based on road camber and crosswinds as well as your road speed and the weight of the load you're carrying. All very Volkswagen. As are the engines on offer, a selection of the very best of the VAG Group crop from the 2010 to 2015 era. The entry-level 1.2-litre TSI petrol unit might not seem well suited to the job of moving a two-tonne 7-seater people carrier but thanks to a turbo and 175Nm of torque, its 105PS actually copes better than you might think, sixty around 12s away from rest on the way to117mph. The same comment is also applicable to the other 1.4-litre TSI petrol option, which uses both turbocharger and supercharger to achieve its 140PS output. Most original Touran buyers however, went for a diesel - and were better served by this MK2 model's efficient 1.6-litre TDI unit boasting either 90 or 105PS than they were by the rumbly-old 1.9-litre TDI it replaced. Not that this engine was especially refined or much faster but it was notably more economic. As with a MK1 model Touran, there are also a couple of 2.0-litre TDI diesel options, the 140PS version and a 170PS variant with the clever 7-speed DSG semi-automatic gearbox that was optional on other models for urban-bound motorists wanting an alternative to the slick-shifting 6-speed manual 'box. As we've already suggested, this car isn't really aimed at driving enthusiasts. If you do like your driving and still want a Touran, then try and find one that was fitted with the optional ACC adaptive chassis control system, one of those systems that individually adjust the dampers at each wheel to allow you to set the ride of the car up to suit the road you're on. Most original buyers ignored this optional set-up. A more popular option was Volkswagen's Park Assist system, able to automatically steer the car into tight spaces. Neat.

By the time this MK2 model was launched, Volkswagen had sold well over a million Tourans worldwide and established a strong following amongst growing families. All this second generation model really needed was a little more of a spark, both in way it looked and performed. It didn't really get it, but this improved design did offer sharper looks, even higher quality and a range of more efficient engines. In this car's lifetime, it was all enough to keep it as the quality choice at the upper end of the compact 7-seater MPV sector. That'll give it quite an appeal on the used market too. Here, it's not an avant garde choice but it is a stylishly safe one. There's a lot to be said for that. 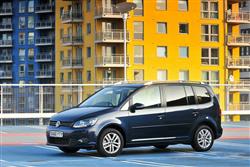 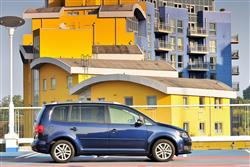 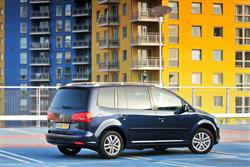 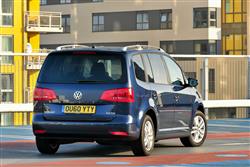 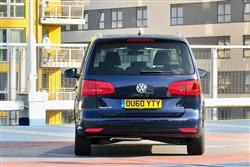 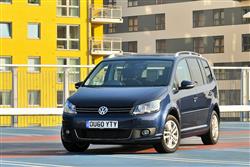