The Touran packs all of Volkswagen's values into a mini-MPV for the customer who appreciates quality. June Neary reports

There seems nothing to stop the inexorable rise in popularity of the mini-MPV. These rather ungainly little cars appear to have knocked sales of small estates on the head and are now going about putting a big dent in the popularity of conventional family hatchbacks. It's easy to see why when confronted with a car as practical as Volkswagen's third generation Touran. It betters something like a Golf in a number of key criteria and doesn't actually cost that much more. Even if you haven't got a huge family to cart around with you, the sheer space and versatility of the Touran make it a very handy companion.

The Touran campaigns in the upper sector of the mini-MPV market, unsurprising given its evidently superior fit and finish. Rivals include cars like Renault's Grand Scenic and Citroen's Grand C4 Picasso. Available only in seven seat guise, the Touran's seating system is certainly flexible. The rearmost pair of seats, whilst only really suitable for kiddies, can fold flat into the floor which means that for most of the time you'll have an easily accessible and spacious luggage bay. You can even fold the middle seat of the middle row, making a four seater that can transport long items like skis with supreme ease. All three of the middle seats slide backwards and forwards on separate runners. Out back, there's inevitably not much luggage space with all seven seats in place - just 137-litres, enough for a couple of carefully positioned small overnight bags. Still, that's the case with any car in this class. Much of the time of course, you're not going to need the two third row chairs. Fold these and you'll raise your boot space up to 917-litres. Or 743-litres up the windowline, which, impressively, is more than you get in a much longer Ford S-MAX. Need more room? Well if the item in question is merely long and thin, like a set of skis, it may suffice merely to flatten the middle second row backrest. If though, you really need to super-size your space, then folding all three rear chairs creates a completely flat cargo area, 1,857-litres in size. That's enough for me. There are plenty of clever touches too. Most owners will want what Volkswagen calls its 'Family Pack' items - namely side window blinds, electrically-activated rear door child locks and a neat Electronic voice amplification system so that front seat folk can more easily talk to passengers behind. I particularly liked the optional Car-Net 'Cam-Connect' app that can connect into a GoPro camera and transmit images from the back of the vehicle onto the centre dash infotainment screen, so that I could keep an eye on what was happening in the rear two rows without needing to turn round.

Where previous Tourans felt like more spacious versions of the Golf hatch they were based upon, this MK3 version feels closer to being a slightly smaller version of Volkswagen's bigger Sharan MPV. That's thanks not only to its extra interior space but also to the more sophisticated ride enabled by the compliant four-link suspension that Volkswagen has designed to sit upon this third generation model's lighter, more sophisticated MQB platform. Beneath the bonnet, buyers get a choice of two petrol TSI engines, 1.2 and 1.4-litres in size, plus at the top of the line-up, a couple of 2.0-litre TDI diesels developing either 150 or 190PS. Most Touran buyers though, will continue to choose the mid-range 110PS 1.6-litre TDI diesel unit I tried, primarily for its frugality. Mate this to the optional DSG automatic gearbox and you can return up to 65.7mpg on the combined cycle and 111g/km of CO2, the kinds of figures you could expect from a 1.2-litre Fat 500 citycar.

If you want the Volkswagen badge and the feel-good factor of all that heavyweight quality you'll need to pay for it. The Touran weighs in towards the upper reaches of the mini-MPV scale with even the entry-level version costing nearly £22,000. Get a little more ambitious with engine and trim choices and you can easily spend as much as you would on a bigger Volkswagen Sharan. It's decently equipped though. Even entry-level 'S' trim gets you the 'Composition Media' system with its 6.5-inch touchscreen. Via this, you'll access an eight-speaker DAB stereo system with Bluetooth 'phone connectivity, an SD card reader and a USB connection. You get an old fashioned CD player too, which isn't always included as standard on cars these days. Volkswagen also throws in roof rails and an XDS electronic differential lock for improved traction and handling. We'd have liked to see a spare wheel of some kind too but unfortunately, as is depressingly common these days, you're stuck, as standard, with one of those fiddly tyre repair kits. Otherwise, included equipment really just covers the basics you'd expect for this kind of money - things like air conditioning, driver's seat height adjustment, all round electric windows and mirrors and a multi-function trip computer.

The Volkswagen Touran is one of the easiest cars to live with imaginable. If anything, it's almost too blandly competent for my personal tastes. I prefer something a little edgier and despite its multitude of good ideas and obvious depth of engineering, the Touran comes off as a little unadventurous compared to cars like the Ford C-MAX, the Renault Grand Scenic and the Citroen Grand C4 Picasso. It's got that Volkswagen quality feel and aura of dependability though, that will tempt many sensibly-minded families. If that appeals, you'll find plenty else to like here. 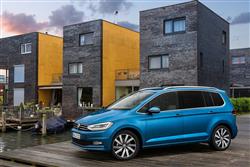 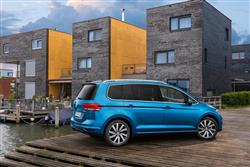 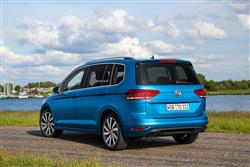 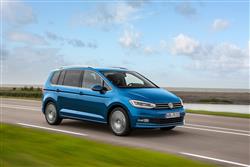 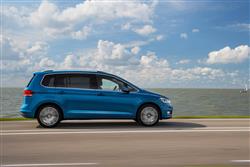 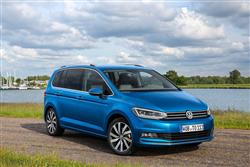