In hindsight, it's probably fair to say that Volvo's C30 was a bit of an underperformer. It had the talent to sell in massive numbers but never quite made the breakout from modestly successful to a real monster hit. Volvo will point to the fact that over the model's entire seven year life span, it shifted 210,000 cars, but that rather ignores the fact that the chassis it's based on is that of Ford's Focus, a car that can shift 80,000 units per annum without breaking sweat. Still, the three-door C30 is a more high concept item, originally pitched as a rival to cars like the Volkswagen Scirocco, Hyundai Veloster and even metal like Audi's A3. Now that it's gone, it's easy to get rather dewy eyed about a Volvo that looked good, drove well and which was several points removed from most people's idea of what a car from this Swedish brand ought to represent. Here's what to look for when seeking out one of the later facelifted models on the used market.

Some cars seem to shuffle on into their dotage, getting progressively more embarrassing before they're finally killed off. Then there are models like the Volvo C30 which seemed to take many by surprise when the Swedish car maker announced that its time was up in early 2013. It had always been a welcome sight on our roads, with its unusual styling giving it a certain cool that identified its owner as somebody who was willing to look beyond the obvious. That the shape wore so well belied its age, as the C30 actually started life in 2001 at the Detroit Motor Show with the launch of the Volvo Safety Concept Car. That design became a production reality in 2006 when Volvo launched the C30 at the Paris Motor Show. The car we're looking at here is a later iteration. In late 2009 - for the 2010 model year - Volvo announced a series of updates to keep the C30 looking and feeling fresh for the last two and a half years of its life. The styling was tweaked, equipment levels were improved and a Sports chassis option was introduced. The last ever C30 departed from Gothenburg on the 13th June 2013. Unlucky for some? Not for the British couple who won the car in a huge treasure hunt. You'll probably need a slightly bigger budget than you'd pay for something mainstream to lay your hands on one, but prices are probably more affordable than you might think.

The smartened front end with its larger air intakes and honeycomb grille is certainly more dramatic and expressive than that of the original, echoing the look perfected by Volvo's C70 and S60 models. You'll need to find a car with the optional accessory styling kit however, if you really want to get the dynamic look the original designers first intended. Otherwise, the design recipe remains exactly as with the original 2006 version of this car. Built at Volvo's Ghent facility in Belgium, the C30 has room for four adults and the option of folding the rear seats flat to form a useful loading space. Although it shares the same wheelbase as the S40 saloon, the tape measure shows this model to be fully 22cm shorter and the car shares not one panel with its four-door stablemate, its wheel-at-each-corner stance instead offering a very different look and feel. The compact shape inevitably means that bootspace is at something of a premium but at 433-litres, it's not too bad and you can always extend it to 947-litres by flattening the split-folding rear seat. If you have got stuff to carry though, the use of a glass tailgate rather than a proper rear hatch means that the opening is small and the loading lip high. Still, style doesn't come without a few sacrifices and there are fascinating design touches everywhere you look around the car, from the horseshoe tail lamps, to the deep arc of the rear glass and the pumped-up Volvo shoulders that run from the front to the rear lights in one uninterrupted sweep. It all continues inside too, most notably with a 'floating' centre console that's attached top and bottom but has open space behind. It's easy to get comfortable at the wheel thanks to a wide range of driver's seat and steering wheel adjustment and dense, soft-touch plastics cover the upper dashboard, offering a premium feel underlined by the fact that everything feels built to last. Only storage space could be better: the tiny glovebox is accounted for by the handbook which leaves only some even smaller door pockets and a couple of cubbies in the centre console. Getting into the back could be easier, but once there, even taller adults should find acceptable standards of both head and legroom, as long as the journey isn't too long. Those with a trio of small children will be disappointed that you can't seat three at the back but at least the occupants who can be accommodated get a surprisingly good view out thanks to the way that their seats are set further inwards than those at the front.

Make sure the car is in very good condition. There's no reason why it shouldn't be, as it will probably be within warranty, but you may find a few scuffs or scratches on some of the interior plastics. The passenger seat back is something that can suffer as access to the rear isn't the best. The diesel engines mop up miles well, although check the clutch on manual cars as the pedal is easy to ride. The T5 has a real appetite for front tyres and even the diesel cars can chew through front rubber if driven enthusiastically. Suspension and transmissions are otherwise robust. Otherwise insist on a full service record and contact a few franchised dealers to try to find the best bargain available.

Volvo's initial job was to get its cars looking sporty. Job done. The C30 and others like the second generation S60 are certainly styled purposefully. Much more difficult was to get highway and driveway experiences to tally up. Despite being based on Ford's acclaimed Focus platform, the original C30 wasn't as rewarding as BMW and Audi buyers expected, its responses not as sharp and agile as the looks. Not everyone wants this of course - people who might otherwise buy a MK1 or MK2 Mercedes A-Class certainly won't - which is why Volvo made its solution, the lowered sports chassis, an optional extra. Original 2010 model year-onwards C30 buyers who gave their dealer an extra £400 for this feature got a much sharper-feeling car thanks to a whole package of stuff including a faster steering rack, springs that were 30% stiffer and tauter dampers designed to build up pressure more quickly. Body roll was noticeably reduced too thanks to a lower centre of gravity (the car rides 10mm closer to the ground in this form) and stiffer roll stabilisers. True, almost inevitably, there's a price to pay for all of this in terms of a stiffer ride, but at least you don't notice this too much at higher speeds. If you're able to, the best advice would be to try both standard and sport set-ups before you buy. Otherwise, if you're familiar with the original version of this car, you'll find things much as before in that the more powerful C30 models can feel slightly nose heavy on twisty stuff but traction is so good that when you get it right, this Volvo just slingshots out of a bend with no drama and very little in the way of torque steer. Wet traction off the line isn't the greatest but lateral grip is superb. Engine-wise, little changed in the 2010 updates, with diesel the most popular option. You choose between a 1.6-litre unit developing 109PS in frugally-minded DRIVe form or 115PS in slightly pokier D2 guise, then a couple of 2.0-litre units, a 150PS D3 and a 177PS D5. Petrol power is taken care of by an entry-level 100PS 1.6, a 145PS 2.0-litre and a 230PS turbocharged unit for the performance T5 model that has a gloriously infectious five cylinder engine note. Even in the entry-level 1.6-litre petrol variant, rest to sixty can be dispatched in 11.2s - or 9.4s in the diesel D3, although you'll need to be very slick at crashing through the 5-speed manual gearbox to get anywhere near these times. The T5 version gets to sixty in six seconds on the way to nearly 150mph.

The Volvo C30 is already being talked of as a cult car by some. Perhaps it's a little too soon for that sort of thing, but it's easy to see why these handsome coupes now make very attractive used buys. With used prices reflecting the somewhat sticky new sales performance, the C30 looks a bargain compared to a Volkswagen Scirocco. A punchy D5 diesel with an R DESIGN body would be our chariot of choice here. 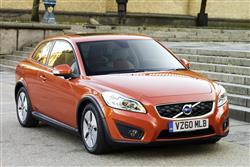