If you're a dyed-in-the-wool Volvo buyer, you probably know the buying maxim. The big ones are good and the small ones are well worth avoiding. That changed with the introduction first of the S60 and then with the V40 of 2012. Especially the V40, come to think of it. It uses the same chassis as the all-conquering Ford Focus and wraps it in some cool Scandinavian design. As such, it's one of the smartest used picks on the market, although that does tend to be reflected in some fairly robust residuals. Here's what to look for when buying used.

We've come to think of Volvo as one of the most conservative of car manufactures, based in no small part on the corporate messages of safety, family and environment. Hardly hedonistic is it? While the messages from Gothenburg preach unthreatening responsibility, the products that Volvo has been building in recent years are a good deal more daring. That's in marked contrast to most car manufacturers who promise the world and then sell you what, after you've stripped away the pretensions, are often quite dull vehicles. The Volvo V40 used to be dull. Wholly, terminally dull. Worthy, yes, but nothing aspirational. That has changed, and how. The 2012 model year V40 was poised, polished and was certainly one of the coolest five-door hatches around. Yes, that's right, a five-door hatch. Perhaps Volvo belatedly realised that it needed to chase the big numbers in this sector, or maybe the Kronor finally dropped that people don't tend to want small estates, but the V40 attacked a new sector of the market and did so convincingly. The range launched with the choice of ES, SE and SE Lux trims in the one body style with a decent array of engines. At the entry-level was the T3 model, with a 150bhp 1.6 GTDi unit and it ranged right up to a 2.5-litre five-cylinder that was good for 254bhp. Volvo started infilling the range in September 2012 with the launch of the ritzy R-DESIGN trim level, soon followed by a Cross Country model, with the D2 automatic and the 120PS 1.6-litre T2 petrol model arriving in the spring of 2013.

Aim directly at Audi's A3 and BMW's 1 Series and you've got to come equipped with quite some hardware. The Volvo V40 has the showroom appeal to meet and beat both of these vehicles. We recently had the opportunity to compare the interiors of these three cars back to back. The latest A3 shades the 1 Series in terms of interior look and feel but the V40 aces them both and by quite some margin. Some serious styling has gone into the V40's interior. The floating centre console houses a button-dense centre stack and the eye is drawn to slick detailing such as the frameless rear view mirror and the translucent gear selector. It's not perfect of course. Some of the stalks feel a little cheap and headroom is a little pinched in the rear with narrow rear door apertures, but features such as the rubberised microswitch tailgate release, the full TFT graphic instrument panel and the deft piano black framed door mirrors keep the design balance well into credit. The boot is a decent size and features a hidden underfloor section to keep documents and valuables out of sight. The exterior is also a clever piece of design with a rear end reminiscent of the XC60, featuring a complex, curved tailgate section which melds into a subtler interpretation of Volvo's signature 'shoulders' that run forward towards the headlamps. The aggressive wedge shape of this car has been created courtesy of a low bonnet, lower in fact than any of its rivals have managed due to pedestrian impact legislation. So how have Volvo got away with it? It's done by fitting a pyrotechnic airbag under the bonnet that fires when a pedestrian impact is detected, keeping any unfortunate's head well away from the V40's potentially injurious cylinder head. As with any car in this class, Volvo has striven to offer as many high-tech options as possible, integrating the sort of features that not so long ago were the preserve of some seriously high-end vehicles. We've got used to features such as adaptive cruise control, blind spot assistance and lane keeping assistance and the V40 offers all of these things. Reducing personal injury claims, especially around town, is a growing concern for both manufacturers and insurers alike and Volvo's City Safety function now functions at up to 31mph rather than the original version's 18mph limit. City Safety keeps an eye on traffic in front using a laser sensor integrated into the top of the windscreen at the height of the rear-view mirror. The car automatically brakes if the driver fails to react in time when the vehicle in front slows down or stops - or if the car is approaching a stationary vehicle too fast. There's also Driver Alert system, a revised knee airbag design. Pedestrian Detection with full auto brake is a technology that saw its debut in this class of vehicle. It can detect if a pedestrian steps out into the road in front of the car. If the driver does not respond in time, the car can warn and automatically activate the brakes. Pedestrian Detection with full auto brake consists of a radar unit integrated into the car's grille, a camera fitted in front of the interior rear-view mirror, and a central control unit. The radar's task is to detect a pedestrian or vehicle in front of the car and to determine the distance to it while the camera determines what type of object it is. It works at speeds of up to 21mph.

The V40's reliability is as good as you'd expect from Volvo. The underlying mechanicals are tried and tested parts and shouldn't give cause for concern. The interiors are also more hard wearing than most but do try to avoid the paler coloured upholsteries, many of which suffer from staining from denim jean dye transfer. Check for parking bumps and scrapes especially on the R-DESIGN models. The big alloy wheels are very susceptible to kerbing. The more powerful versions have quite an appetite for front tyres, so check there's some life left in the rubber. One final word on the Cross Country models: if you're looking at one expecting to be able to go anywhere, you might need to manage your expectations a tad. Only the range-topping T5 petrol model (i.e. the powerplant nobody would choose for off-roading) is all-wheel drive. The more practical-looking diesels are, in fact, front drivers and almost useless when the going gets slippery.

Volvo is no longer part of Ford's Premier Auto Group, instead being owned since 2010 by Zhejiang Geely of China. Planning horizons being as long as they are, however, it won't come as any great surprise to learn that most of the underpinnings of the V40 are shared with the latest Ford Focus. If there's a more cast-iron guarantor of a decent drive in the family hatch sector than that, we've yet to find it. Customers looking for a spirited drive won't be disappointed by the petrol engines on offer. The 120bhp T2 is a bit of a yawn, but the 150bhp 1.6 GTDi T3 is well worth a look, offered with a six-speed manual gearbox. The T4 is a 180bhp version of this engine, offered with a six-speed Powershift transmission or a six-cog manual. At the top of this tree are a pair of T5 units, both deploying power via a six-speed automatic 'box. Choose between a 2.0-litre 213bhp unit or the venerable 2.5-litre five-cylinder that's good for 254bhp. This engine will demolish the sprint to 62mph in 6.3 seconds. Just press and play. Diesel customers are also well catered for, with a 177bhp five-cylinder 2.0-litre D4 topping the range. This is joined by a 150bhp version, badged D3, and the entry-level model is a 115bhp 1.6-litre unit. Don't discount this engine out of hand because of its modest power output. It's notably lighter than the five-cylinder lump and offers sharper turn-in to a corner as a result.

The Volvo V40 might stand accused of being a Ford Focus in a posh frock, but what exactly is wrong with that? Take the industry-accepted best chassis in the business and dress it in some slick styling, give it a cooler badge and you have a seriously talented vehicle. It's right up there with Volkswagen's seventh-generation Golf in most regards bar boot space. Of course, used prices reflect this fact. There don't seem to be many screaming bargains when shopping for V40s. You'll have to console yourself with the fact that you might be paying a bit more but they seem to last extremely well. We'd be looking at a D2 or D3 diesel in as high a trim level as the budget would allow. 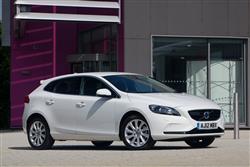 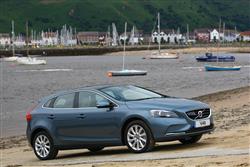 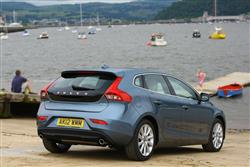 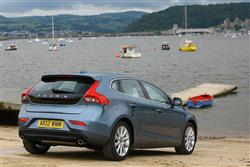 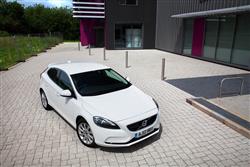 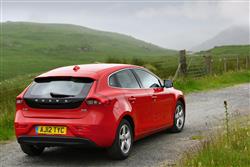