The Hyundai Santa Fe: now with that 'want one' feeling fitted as standard. Jonathan Crouch reports

Hyundai's Santa Fe has come a long way from the times when it was a budget brand SUV pick. These days, this model is the flagship of the Hyundai range, offering seven seats and European brand standards of technology and quality. This improved version of the fourth generation model ditches diesel in favour of electrified power powerplants. And it might well surprise you.

Look at a car like this, Hyundai's improved MK4 model Santa Fe SUV, and you get some idea of just how far this South Korean brand has come in recent years. This, after all, is the kind of quality product that has driven the improvements in its recent fortunes. The Santa Fe has had a big role to play here. Looking back, it was the launch of the MK2 version of this car in 2006 that really put Hyundai on the map. Not only was it beautifully built - it also had beautiful market positioning, this the first relatively affordable SUV to blur the boundaries between the mid-sized class and the large Crossover segment better suited to bigger families. Santa Fe buyers paid compact sector prices but got the kind of 7-seat capacity they'd previously needed a much larger SUV for. No wonder this car became such a strong seller for the UK importers. This time round, its smartened up its act, but the basic proposition remains much the same.

How an SUV drives is usually pretty far down the priority list after how it looks, what it costs and how much room there is inside. We used to take it as read that an SUV would be about as sharp as a serving of refried beans to drive but in recent years, we've seen the pendulum swing back the other way with 'sporty' 4x4s that cornered better but at the expense of decidedly brittle ride quality. There has to be a happy medium between these two extremes and Hyundai claims that this car rather neatly strikes it. To help with that objective, this fourth generation model was originally launched with an all-new platform, stiffer and more sophisticated than before, which helps to keep body roll in check. That's not enough to make the Santa Fe a particularly engaging drive though. With this updated model, the big news is that Hyundai has at last summoned up the courage to be able to ditch diesel. In place of the previous 2.2-litre CRDi unit, there's a choice of two petrol powerplants both based around a 1.6 T-GDi petrol powerplant starting point. Either a 245PS full hybrid unit offered with either 2DW or 4WD. Or a 265PS Plug-in version, which only comes with 4WD and can go up to 36 miles between charges. Either way, you get a 6-speed auto gearbox. The 4WD system in question is Hyundai's 'HTRAC' set-up, which apportions torque in varying quantities between the axles depending on the traction available, at the same time as braking individual wheels in search of better grip.

The latest Santa Fe isn't quite the sort of car that will have pedestrians bumbling slack-jawed into pavement furniture but it's undoubtedly a good looking thing. It has that inherent rightness to its proportioning that'll make it tricky not to throw a glance over your shoulder when you lock it and walk away. Most importantly, choose an upscale version and it looks - and there's not really a better word for it - expensive. That's exactly the desired result, as Hyundai is trying to push the Santa Fe upmarket. For this revised model, a number of exterior and interior enhancements have been introduced including a redesigned front end with a new cascading grille, T shaped headlamps and a sculpted front bumper. Rear design changes include new connected tail lamps, full length lower reflector and a redesigned bumper. And inside? Well cabin updates include a redesigned dashboard with a standard 10.25-inch infotainment system and optional 12.3-inch supervision instrument cluster screen. Interior space has been increased all around, width by +10mm, length by +15mm and height by +5mm. At the back, this revised Santa Fe boasts an increase of 34mm of 2nd row legroom over the previous model, giving this improved model an overall best in class 2nd row legroom of 1060mm. This enhanced Santa Fe also continues with a standard 7 seat interior - many D segment competitors only offer 5 seat configurations. As before, there isn't a huge amount of space in the third row (don't think of this as an alternative to a big MPV). Nevertheless, adults will be OK there provided the journey isn't too long and second row occupants can slide the mid bench forward a little. Luggage capacity across the range is 571-litres (seats up) and 1649-litres (seats down).

If you're worrying that the switch away from diesel might have made this Santa Fe pricey to run, your fears might be put at ease by a glance at the WLTP-rated stats. In 2WD form, the 1.6 T-GDi model manages up to 44.1mpg on the combined cycle and up to 145g/km of CO2. For the 4WD version of this Hybrid model, the stats are up to 40.4mpg and up to 159g/km. For the Plug-in Hybrid variant, the stats are 173.7mpg on the combined cycle and up to 37g/km of CO2 as we mentioned earlier, this PHEV variant is capable of going up to 36 miles between charges, which will each take about four hours. What else might you need to know? As ever with Hyundai, a strong buying incentive is the five year unlimited mileage warranty that comes as standard. It's backed up by breakdown cover that last the same length of time and free annual vehicle health checks over this duration. True, rival brand Kia claims to better this package by offering a similar seven year deal, but there, you're limited to 100,000 miles. As for servicing, well your Santa Fe will need a garage visit once a year or every 10,000 miles, whichever comes sooner. If you want to budget ahead for routine maintenance, there are various 'Hyundai Sense' packages that offer fixed-price servicing over two, three or five-year periods. You can pay for your plan monthly and add MoTs into the three or five year plans for an extra fee.

The Hyundai Santa Fe has improved and improved fast. This fourth generation model's predecessor was a really solid vehicle that now looks a great used buy, but this one has stepped it up more convincingly than many thought possible, especially in this revised form. It looks classy, it's really well built and it's cleverly thought through inside. As a result, it's almost impossible to dislike, even if SUVs really aren't your thing. Come to think of it, this Korean contender is probably a very good choice for someone who's never even really considered an SUV before. It's not showy or offensive, instead marrying all the best bits of models of this kind, namely their space, versatility and ease of ownership, with the refreshing lack of drama of a normal big family car. If you've got a family, have room in your life for just a single car and need one that'll discreetly go the distance without a hiccup, then it's well worth trying one of these. Do that and who knows. You might once again start to believe in Santa. 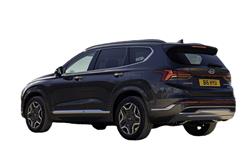 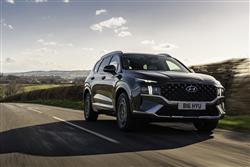 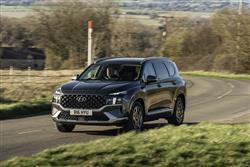 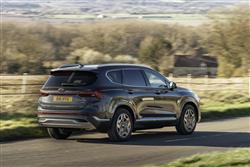 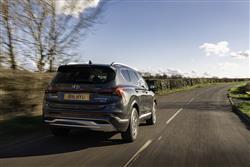 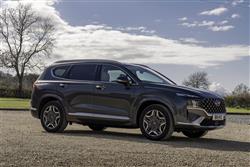