Much more than just an eye-catching shell, it’s the high-performance Hyundai IONIQ 5. 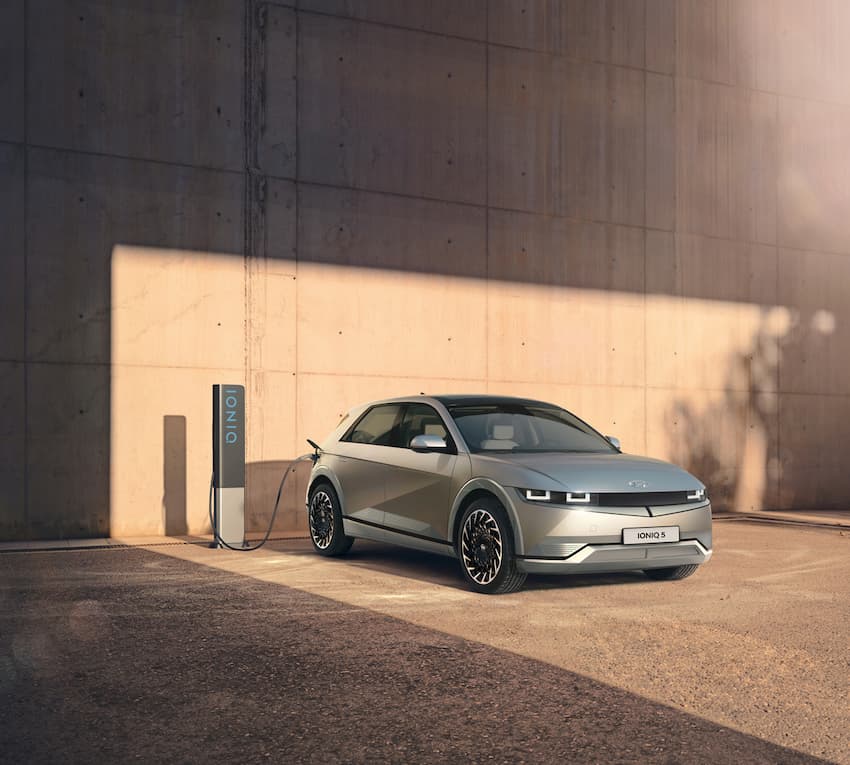 Hyundai has unveiled what it hopes to be a real all-electric statement with its IONIQ 5. Powered by a progressive powertrain, there’s a lot to like about this all-electric offering beneath the bonnet – and its roomy boot, to boot - but it’s the IONIQ 5’s exterior aesthetic that really impresses from the outset.

That’s the look (other EVs should aspire to)

The Hyundai IONIQ 5 is every inch the modern car and that’s typified by its outer shell; shiny, curved and with super smart triangular indents on the vehicle’s flanks which Pythagoras would be proud of.

Both front and rear panels span the width of the car, an eye-catching design which on closer inspection is wonderfully intricate, the rear lighting is composed of a uniform grid of tiny squares, and the front gives off a look that perhaps verges on aggressive - not in the snarling big cat mould of Peugeot but more in the form of a sort of glowering face - and certainly looks purposeful.

The rear passenger windows also feature a gentle tint which seems to increase the immersive feel of the cabin.

Taking a ‘macro’ look at the IONIQ 5’s exterior shape, it’s a model that edges the automotive world closer to 20th Century cinema’s visions of what 21st century driving would look like; a buggy-like shape built with efficiency and minimalism.

Still, that doesn’t mean there isn’t any room for creative expression; the IONIQ 5’s contrasting body colour detailing is instantly noticeable – and matches subtly with the tinted rear passenger glass -while the car’s 20-inch alloy wheels, chrome-studded and spiralised, are sure to bewitch passers-by, showing a creative expression in the IONIQ 5 which belies its apparent frugality overall. 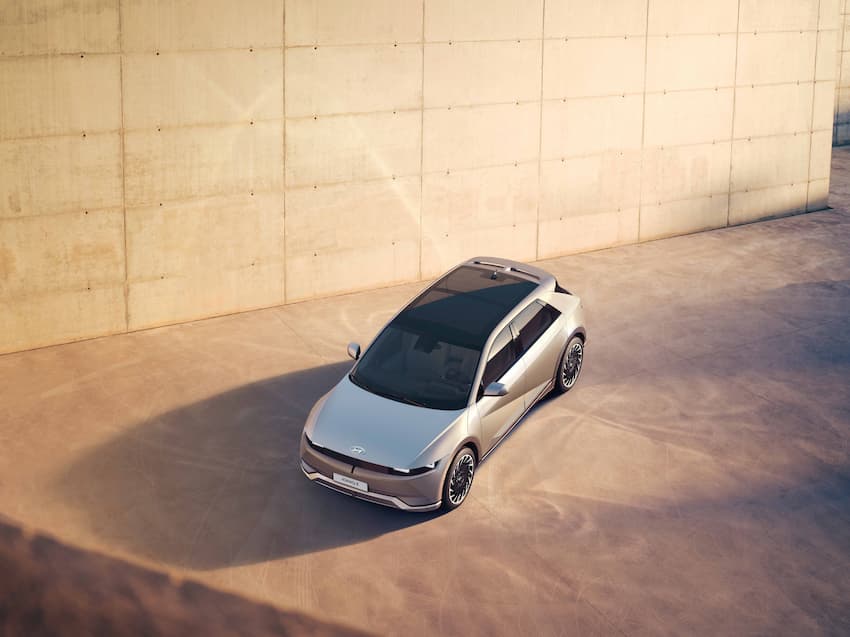 The IONIQ 5 cabin is an agreeable place to be. Minimalist but considered, the interior is defined, facing forward, by adjoining 12.3-inch screens – one in front of the steering wheel to display live driving data, and the other a central console allowing easy sat nav use – which give the driver and passengers a real sense of a high-tech driving experience.

The steering wheel itself is sporty, almost apple-shaped, with a squared bottom rung and the rest of it rounded. Attached to the frame are entertainment and driving info controls, and a small circular button to allow you to change driving mode at thumb’s reach.

Between the front seats, some essentials for modern driving and long-distance motoring can be found through the car’s spacious drinks cubbies and USB charging points.

The aforementioned roomy boot, which offers the 500+ litres of room, should do a respectable job of meeting storage requirements for various trips away, whether it needs to stow a spare business suit or the weekend luggage. 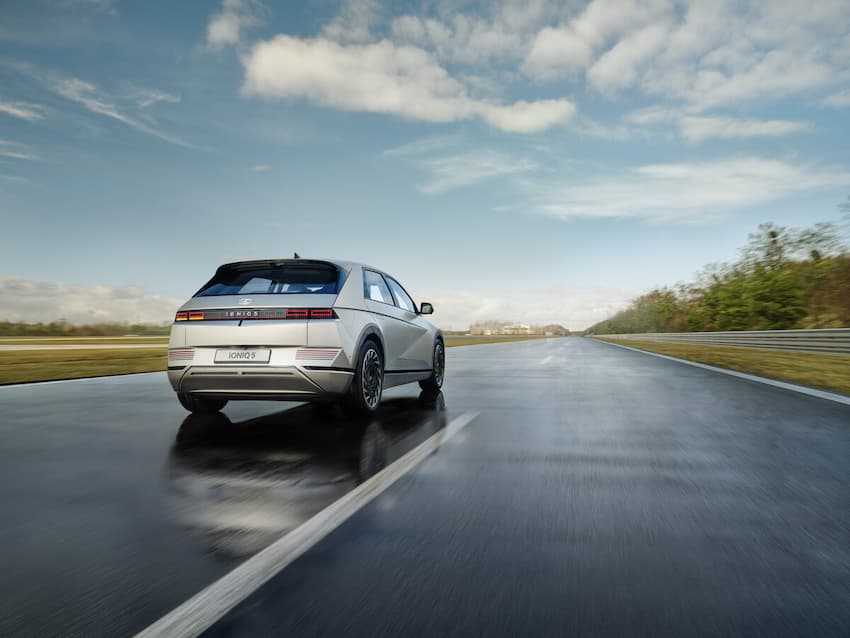 You can stay near to home or venture farther away with the range this all-electric model provides, peaking at an impressive 298 miles’ capacity on full charge. Considering that 80% of the UK’s single road journeys are 20 miles or less, this looks to have the electric juice for longer trips away, whether that’s for business or pleasure.

The manufacturer is pushing the appeal of fast charging and far-reaching capacity through its Electric-Global Modular Platform (E-GMP), said to be designed with efficiency in mind. One main reason, according to Hyunda, being that the IONIQ 5’s battery pack is stored within the wheelbase to ensure “ideal weight distribution between the front and rear, and a low centre of gravity for improved handling performance.”

The IONIQ 5 is pretty rapid, achieving an acceleration from 0-62 mph in under five seconds (under unofficial test conditions), thanks to a 77.4kWh battery and 302 bhp, which gives the IONIQ 5 a top speed of 115 mph.

As an all-wheel-drive model, the IONIQ 5 should handle well in both humdrum urban drives and on more adventurous routes out of town thanks to the drivetrain sending power to the area of the car with the most traction (which is especially helpful on the turn). 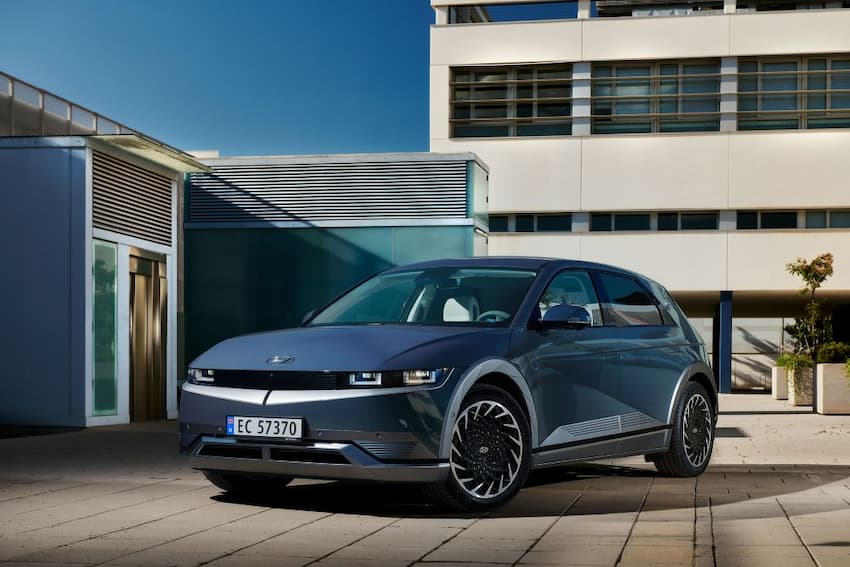 The Hyundai IONIQ 5 has a certain space-age appeal, but that’s not going to be enough when you’re out on the road. Happily, the model meets real-world requirements by proving itself adaptable, smooth and nimble in everyday road situations.

Better still, in an automotive EV world that’s more competitive than ever, it’s a bit of a standout for Hyundai – marrying daring looks with likeable features and desirable driving performance. 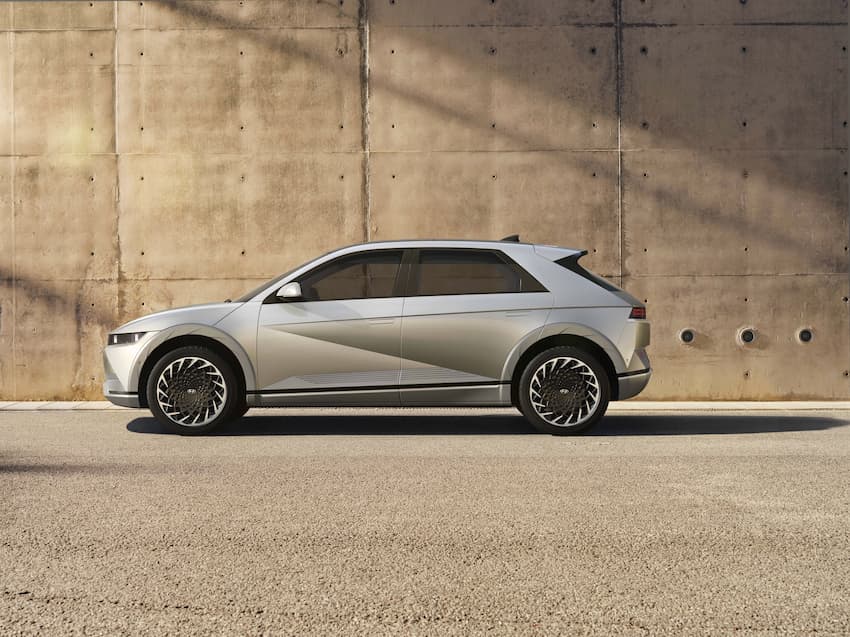