Get all the facts on the all-electric BMW iX3 before it arrives in showrooms in early 2021. 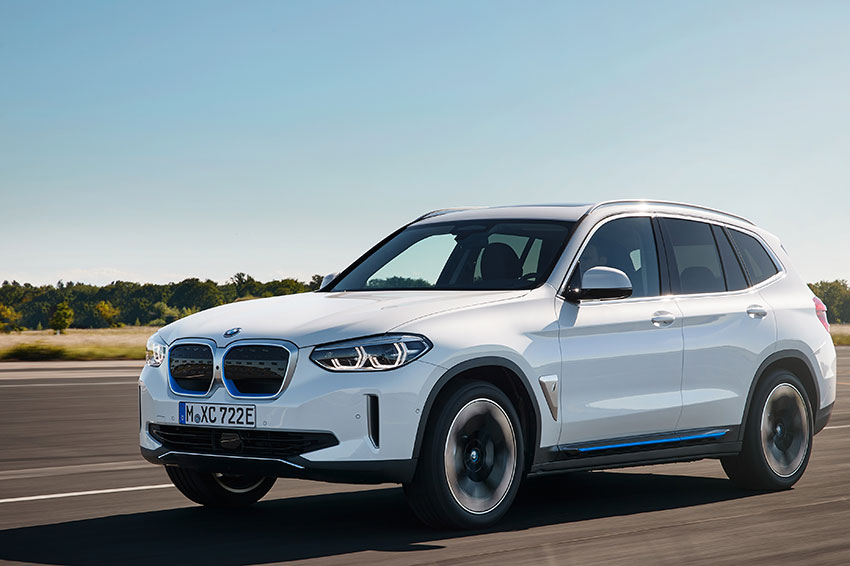 BMW has upped the all-electric ante by introducing the iX3. BMW’s first electric SUV goes on sale across the UK next year, to join the ranks of high-end electric models like the Audi e-tron, Tesla Model Y and Mercedes EQC. BMW claims it will have a range of 285 miles.

Essentially an electric version of the ever-popular X3 SUV, this newcomer is not just the company’s first electric SUV – it’s also the first BMW to be available with either pure combustion, plug-in hybrid or all-electric power.

Of greater significance is the fact the iX3 debuts BMW’s ‘fifth-generation’ electric drivetrain technology. Such is the powerplant’s importance that it will also appear in future EVs, including the i4 saloon and the range-topping iNEXT SUV.

Tell me about the battery, range and performance… 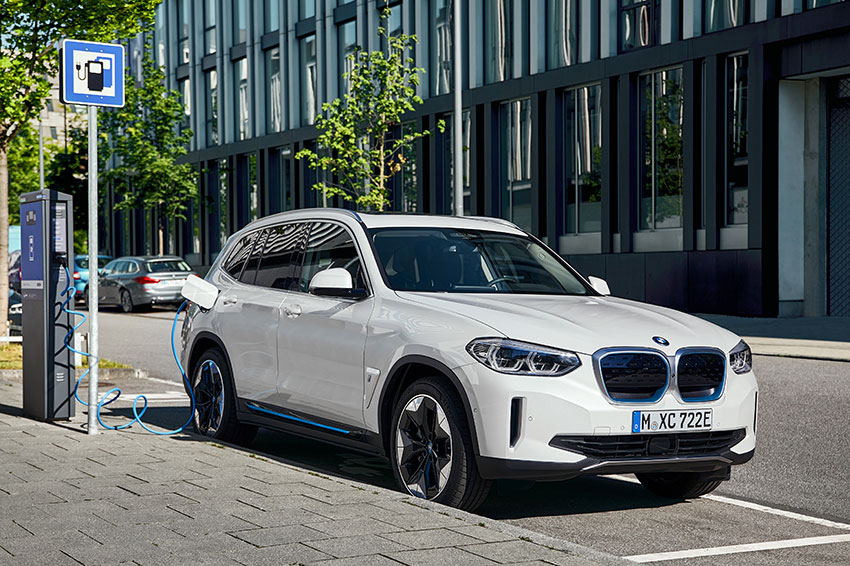 Fitted into a new rear sub-frame is an electric motor and an 80kWh battery pack. So far so normal, in so much that the battery pack compares directly with that of its main rivals. But BMW claims its new pack in the iX3 is 30% more energy dense than any battery it has used before.

Why is that important? Having 30% more power density results in the pack being slimmer and lighter than previous 80Wh batteries and as it’s more compact, more space is available elsewhere.

As for performance, BMW says the iX3’s 282bhp electric motor, which drives the rear axle — it’s not four-wheel drive, despite its SUV looks — will propel the car from 0-62mph in 6.8 seconds. Top speed is 112mph. The company also claims a maximum range of 285 miles on a single charge.

When it comes to recharging, the iX3 can handle up to 150kW at a suitable direct-current (DC) rapid charger station. That means a 0-80% charge in 34 minutes. Alternating current (AC) single-phase and onboard three-phase charging at 11kW is also standard.

How does it work? Ok, bear with me. In simple terms, the iX3 can autonomously change the level of braking recuperation on the move and adapt to the road ahead. It achieves this by using location data from BMW’s latest cloud-based navigation system. The simplest example of its efficiency is if the car recognises that a ‘Stop’ sign is ahead, full recuperation will be deployed without any need for the driver to select it. On open roads, the system will allow for normal coasting.

Of course, the driver can also take manual control of the regenerative braking via the drive selector. Three recuperation levels — high, medium and low — are available by selecting the ‘D’ position. Moving the drive selector to the ‘B’ position enables high enough energy recovery for one-pedal driving around town.

It looks slightly different from the X3… 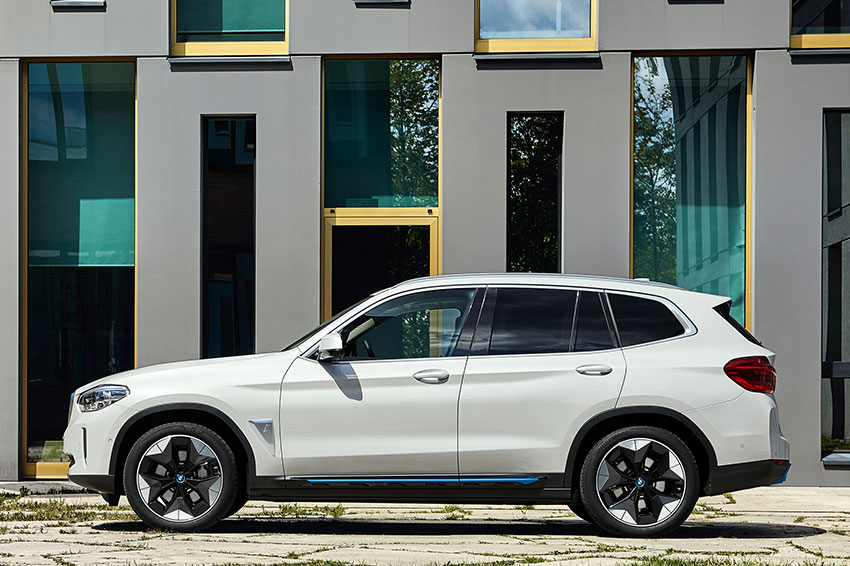 You’re correct. The front grilles are closed off for aerodynamic purposes and the front bumper has been reprofiled to include vertical air ducts at each corner. Blue elements within the grille, sills and the lightly revised rear bumper are used to signal the iX3’s electric propulsion.

The iX3 also comes with a set of aerodynamic wheels. So significant are they that BMW says that the wheels reduce the car’s drag coefficient by around 5% compared to regular X3 wheels. That equates to an extra six miles of range on a full charge, which might be the crucial difference between reaching your destination or not. The wheels also contribute to a drag coefficient of just 0.29.

And what about the interior?

BMW hasn’t issued any photos of the cabin yet, but it’s pretty safe to assume it’ll mirror much, if not all, of the already excellent regular X3. So, expect the same dashboard, switchgear and centre console. What will be different is, like the exterior, there will be an element of blue trimming to signify the iX3’s electric drivetrain.

One thing BMW has confirmed is that a 12.3-inch digital instrument cluster is standard, while a 10.25-inch central display can be controlled through touch inputs or a rotary controller. The most recent version of iDrive 7, featuring over-the-air software updates, is also fitted to the iX3, as is the latest version of BMW Intelligent Personal Assistant. Apple CarPlay and Android Auto are also included as standard.

Space for driver and passengers will also remain the same, though maximum boot capacity with all seats in place is reduced to 510 litres; that’s 40 litres down from a regular X3.

I’ve heard something about ‘electric noise’ – what is that?

BMW IconicSounds Electric — which sounds like a Gary Numan-influenced New Wave band from the late-Seventies — makes its debut in the iX3. It plays a system of subtle, synthesised noises into the cabin to match acceleration and braking inputs.

Film composer Hans Zimmer — responsible for the music in more than 150 films, including the Pirates of the Caribbean series, Gladiator, Dunkirk, and who won the Oscar for Best Original Score in 1995 for The Lion King — is the man who helped create the soundtrack to your drive.

Any word on prices for the iX3? 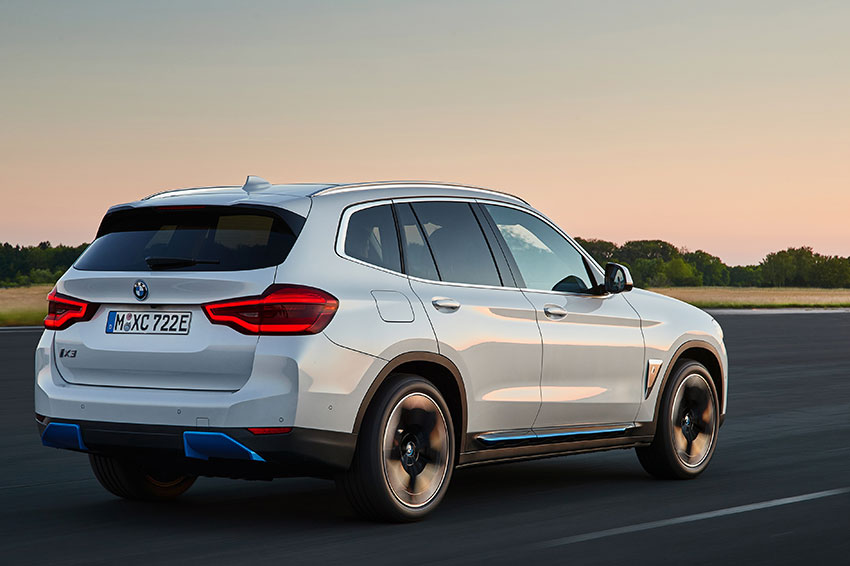 Officially, we’ll need to wait until the autumn for UK pricing and spec details. The iX3 will be built exclusively at a joint-venture factory operated by BMW and Chinese carmaker Brilliance in Shenyang, Liaoning. We know right-hand-drive UK deliveries are planned to begin in March 2021.

From launch, a flagship Premier edition of the iX3 will be available, with the rest of the range following soon after. Using all-electric competitors as a guideline, expect an entry-level iX3 to set you back around £60,000.