As the Winter Olympics kick off tomorrow in Sochi, Volkswagen has been breaking records of its own 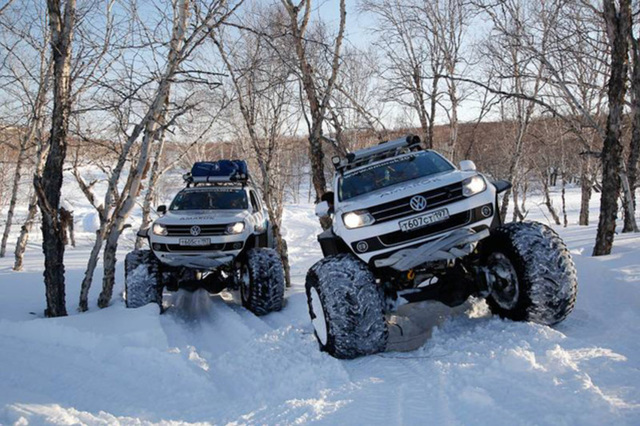 Volkswagen Russia is the official vehicle partner of the Sochi Winter Olympics – the organising committee will benefit from the use of 3,000 Volkswagen, Audi and Skoda vehicles.

The manufacturer also developed three very special trucks for the games – all of them a polar expedition variant of their Amarok truck, to help whip up the more remote areas of Russia into a frenzy about the forthcoming games, which get started on 7th February.

In early 2013, these gargantuan trucks set off on an incredible journey of 9,942 miles – spanning 60 days – from Moscow to Petrapavlovsk-Komchatsky (one of the largest "cities" in the world unreachable by road), achieving a new Guinness World Record along the way.

The crew behind the Amaroks tackled all manners of trying conditions – from sliding across three-foot thick ice on Lake Baikal to getting stuck in heavy snow at Lultin Pass.

The specially modified Amaroks were kitted out with a host of GPS tools, gigantic off-roading tyres, lots of extra lights, a roll cage and heaps of storage.

Volkswagen has made a special Sochi edition of the Amarok available to Russian customers.

If you fancy tackling a world record in the snow, make sure you’re familiar with our top tips for winter driving before you set off.