Can cars run on alcohol? 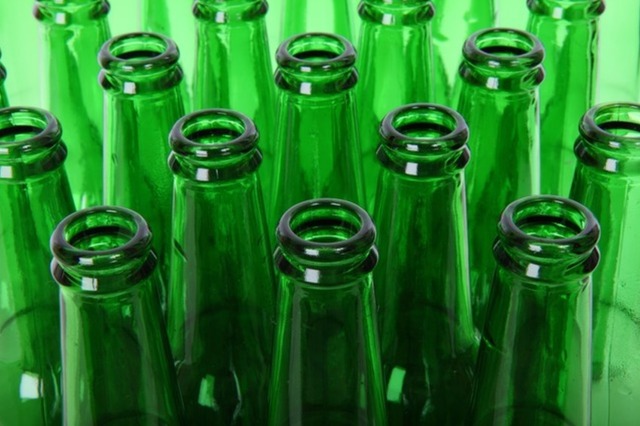 Using up the dregs from a wild party won't work, unfortunately.

If you’re flirting with the notion of filling up your fuel tank with leftover vodka, please don’t. But it is true that cars can – and do – rely on alcohol, specifically ethanol, for fuel.

In the UK, petrol from the pumps is currently mixed with 5% ethanol – due to increase to 10% this year. However, in places such as Brazil and the United States, the use of ethanol as fuel is far more widespread. So how does it work, and what are the benefits?

Ethanol (ethyl alcohol), also found in alcoholic drinks, is produced by fermenting sugar solution. In the US, this means growing corn and using the starch produced. Grass, wood and agricultural waste can also be used to make “cellulosic” ethanol.

Pure ethanol – 100% ethanol or E100 – could theoretically be used to power cars, but generally isn’t, for numerous reasons:

Ethanol is therefore blended with petrol – usually 85% ethanol to 15% petrol, or E85 – to produce the most common biofuel in the States. The highest percentage of ethanol fuel sold in the US is E85, but in sunny Brazil it is E95 – starting the car in cold weather being less of an issue. 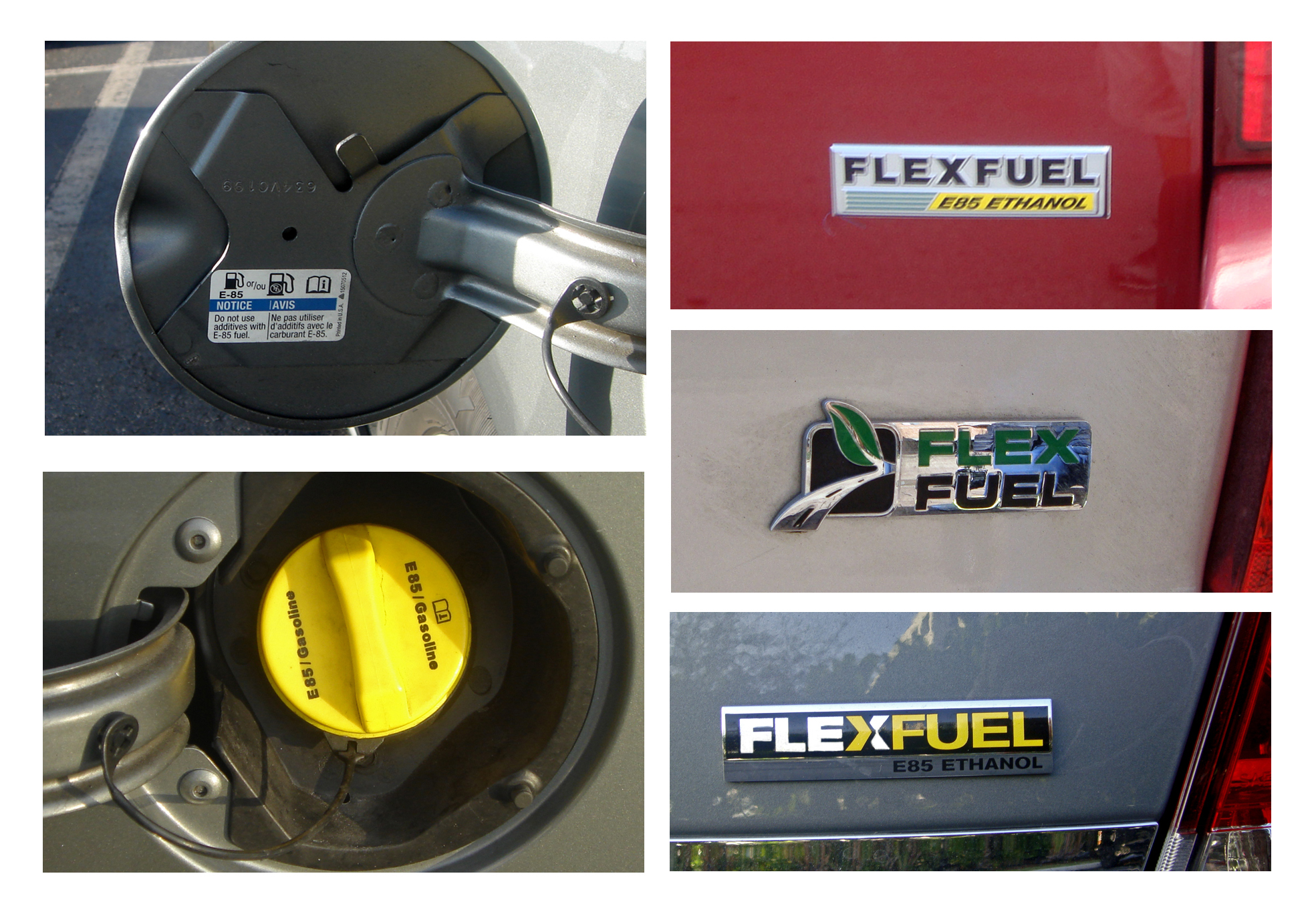 Flex Fuel vehicles have yellow petrol caps in the US

It is argued that E10 can be used in regular cars without the requirement for engine modification; but many have suggested that older cars can still be damaged by using even small amounts of ethanol in the fuel.

The technology for creating ethanol fuel has existed since the 1920s, but didn’t really take off until the 1980s, starting in Brazil. Looking for renewable, alternative fuel sources, the Brazilian government saw that around 90% of the country’s cars ran on ethanol in the 80s. Although this number dropped at the same time as oil prices, the use of ethanol has increased once again in the nation. Now, ALL fuels used must contain a minimum of 25% ethanol. Brazil is the largest exporter of ethanol in the world: approximately 87% of newly-registered vehicles there (2012) run on alcohol and it has 16 million of the world’s 27 million FFVs. Petrol consumption has dropped by 30%.

Is it cheaper than petrol?

Um, not really. Ethanol isn’t cheap to produce but, because it comes from a renewable source, it is predicted to become cheaper than traditional fuel sources. And, depending on where ethanol is produced, import costs may cease to be a key factor in fuel price.

Will ethanol fuel improve my MPG?

Eh… no. Because a gallon of ethanol contains less energy when burned than a gallon of gasoline, ethanol yields lower fuel economy than gasoline. Cars using E10 will generally see MPG reduce by 3 or 4%; FFVs operating on E85 may see a drop of up to 30%.

Recent investigations by WhatCar? have suggested that E10 could cause a reduction in fuel economy and increase fuel spend. Their tests indicated that less powerful cars would fare worst, with the Dacia Sandero dropping its MPG by 11.5% using E10.

Great question! Long story short, it depends on how the ethanol was produced and how it is used. Generally, using E85 will produce lower emissions than conventional fuel. * The levels of oxygen in ethanol (35%) mean that fuel combustion is more ‘complete’ and tailpipe emissions are reduced. * Ethanol also displaces benzene, which is linked to cancer, and is a non-toxic, water-soluble and biodegradable. * As it’s made from plants, ethanol is quasi-renewable.

“From its biodegradable nature to reductions in greenhouse gas and tailpipe emissions, ethanol provides a tool to address environmental concerns without requiring an entirely new way for goods and people to get from one place to another.”

In terms of ‘life cycle’ calculations (taking into account how the fuel is produced, transported, etc – not just when it is used in a vehicle), cellulosic ethanol is said to produce 86% less greenhouse gas (carbon dioxide, methane, nitrous oxide) than gasoline. However, these numbers are based on ethanol refineries using recycled wood chips instead of coal – perhaps a large leap of faith. A University of California at Berkeley study showed that ethanol doesn’t take more energy to produce than it provides; ethanol made from corn has a positive "net energy balance," particularly if you consider that other valuable products, such as corn oil, are byproducts of the ethanol-making process.

So ethanol fuel is good for the planet?

Not so fast. Burning E85 still releases pollutants; permeation emissions (fuel soaking through the pipes of a car) and tailpipe emissions. Fuels with ethanol levels from 6% - 20% release the most permeation emissions – you’d be better off using pure gasoline, or of course higher levels of ethanol. Similarly, cars made before 2000 will be worse than those made after 2004.

The Union of Concerned Scientists states:

Calculating lifecycle emissions is problematic (land use changes are often not taken into account i.e. converting forest land to cropland, which can increase global warming) and demonstrates that corn ethanol production does rely heavily on fossil fuels and fertilizer. However, as long as farming land isn’t being reclaimed for growing cellulosic materials, cellulosic ethanol is pretty green – it takes less fertiliser to create, less land for the same amount of fuel, and by-products can be used to make combustible fuel.

Using corn to produce ethanol while there are people in the world going hungry could be seen as a wasteful approach; however, cellulosic ethanol is made from inedible substances and can be grown anywhere in the world – so does have pretty good environmental credentials.

Can I convert my car for ethanol fuel?

This is a pretty costly exercise. With lower MPG and a higher price per unit for ethanol, the cost isn’t really worth it. But do make sure that your car can cope with the 10% of ethanol that will be creeping into most petrol in the UK – some older cars may not like it.

What are the other alternatives to petrol?

Methanol is more efficient than ethanol and less expensive to produce – but isn’t widely used yet (it’s pretty toxic). Other biofuels include hydrogen (Hyundai are experimenting with 100% hydrogen-powered cars), algae, fungi and Jatropha.

You could also go electric or hybrid to save money at the pumps and decrease your carbon footprint – search our range of electric vehicles for inspiration.