Full details and specification, images and reviews for the brand new Renault Twingo. 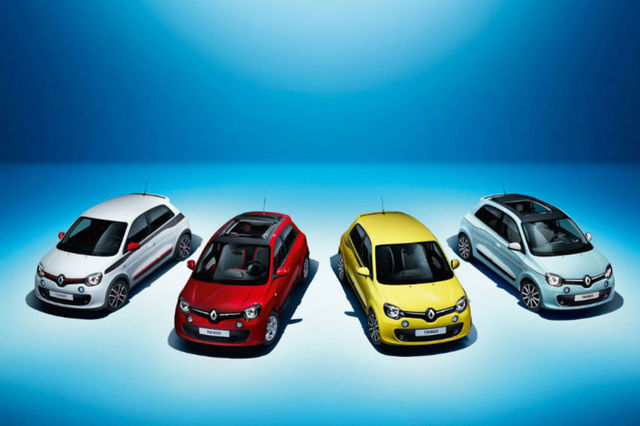 Renault has taken a fresh look at its celebrated city car, giving it a rear-mounted engine and five doors and thus enhancing manoeuvrability and cabin space.

Revealed initially on February 14th and showcased fully at the Geneva Motor Show on March 4th, the new Twingo is described by Renault as an “innovative and agile car that is great fun to drive”. The original Twingo launched at 1992 Paris Motor Show; the third generation of this popular city car, developed in parallel with the new ForFour from Smart, now comes with 5 doors and a rear-mounted engine for agile handling and extra cabin space.

The Twingo has either a normally-aspirated or turbocharged three-cylinder petrol engine, delivering a fuel-efficient and punchy performance. The configuration of the engine, along with the placement of the wheels at the car’s extreme corners, makes the Twingo more agile to drive than ever. It has an improved turning circle – 8.65m, 1m less than some of its competitors – and surprisingly roomy dimensions.

With an extra 13cm inside – despite being 10cm shorter overall – the Twingo is extremely practical, and offers a whopping 2.2m maximum load length.

“We had been thinking about a rear-engined architecture for some time. It takes courage and creativity on the part of the design teams to completely rethink how a car’s volumes can be used. New Twingo is particularly innovative and is notable for several attributes that are vital for a city car, namely manoeuvrability, visibility and space for passengers.”

So we know the engine has moved to the back, it’s now got five doors, and it’s more compact on the outside. What else has changed on the Twingo’s exterior?

At the front, you can see trademark Renault styling – a prominent logo, big head lights with LED daytime running lights, and an unmistakeably cute little face. Renault claims it has a “cheery yet robust air” and a “sprightly personality”. If ever the attempts to anthropomorphise a car have been well placed, it is here. 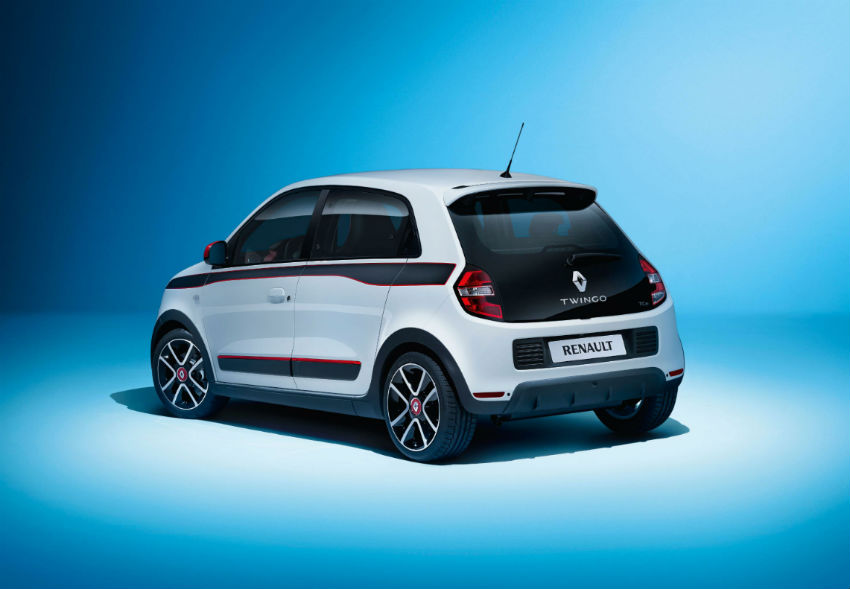 At the back, a wide one-piece glass tailgate gives the car a modern feel. The rear lights flow naturally from the tailgate. Like the new Clio, the Twingo boasts a sleek profile, with concealed rear door handles (so you can’t really tell that it’s got two extra doors).

Inspiration has clearly been taken from the Renault 5 – the flat new face, wide rear arches, placement of the rear screen and rear engine, and tiny overhangs – as well as the Twin’Z and Twin’Run concept cars that Renault unveiled last year. Comparisons have also been made to the Fiat 500.

“New Renault Twingo was inspired not only by the original Twingo but also by the Renault 5. It is a modern take on the city car theme with the accent on innovation in terms of its lines and architecture. New Twingo is a fun, playful and vibrant city car. It is ultra-manoeuvrable, roomy and immensely practical. You’ll be itching to get behind the wheel and take it out for a drive.” 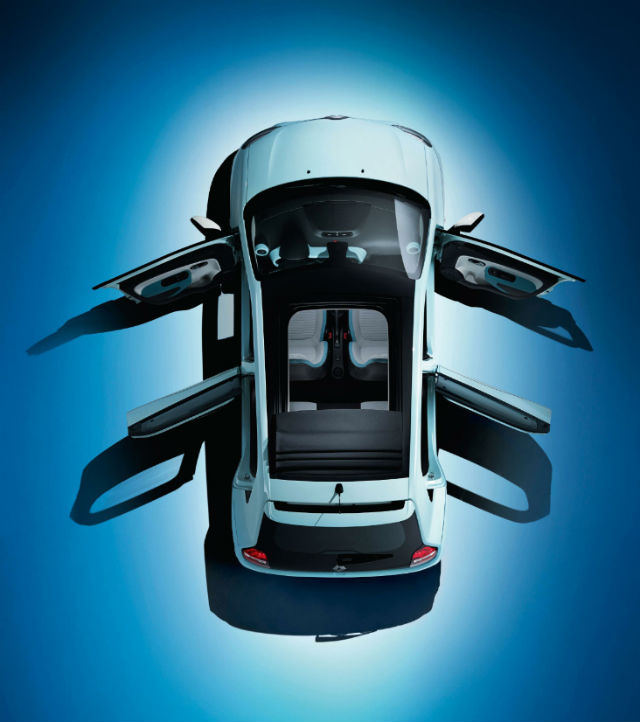 Twingo drivers can enjoy a nice high driving position in front of a large windscreen, giving them the optimum view of the road ahead – and a record forward visibility, with a vertical field of view of 12 degrees – as well as a sporty, fun feel to their journey.

Although more compact (let’s face it, this is a cute car), the Twingo boasts plenty of space for drivers and passengers. Indeed, the car offers best-in-class kneeroom (13cm) and can carry a 2.2m load, even with someone sitting in the back.

All this space is created thanks to a flat floor, 50/50-split folding rear seats and a forward-tipping front passenger seat back – in other words, a “highly modular interior”. The boot is surprisingly spacious (the wheels arches don’t interfere) and there are some other great storage solutions: with Flexicase®, the new Twingo can be equipped with, for example, nets underneath the rear seats, rear door bins complete with bag hooks, a console between the front seats, or a removable bin at the bottom of the centre console. Together, these solutions can provide an additional 52 litres of storage.

“Our mission was to create a cheery cabin that was fun to be in, with a host of opportunities for personalisation – right down to the different stowage solutions. The idea was to reimagine the iconic interior of the original Twingo. The driving position is enticingly sporty and we gave it a cockpit-like feel that makes you want to climb in and take it out for a drive.”

Following on from the Twin’Z and Twin’Run concept cars that Renault presented last year, the Twingo has a colourful personality. You can choose from four striking colours (light blue, white, yellow and red) and there’s plenty scope for personalization. Exterior trim features like the door mirrors, side protective mouldings and decals are customisable – so you can really make this car reflect your own individual tastes. 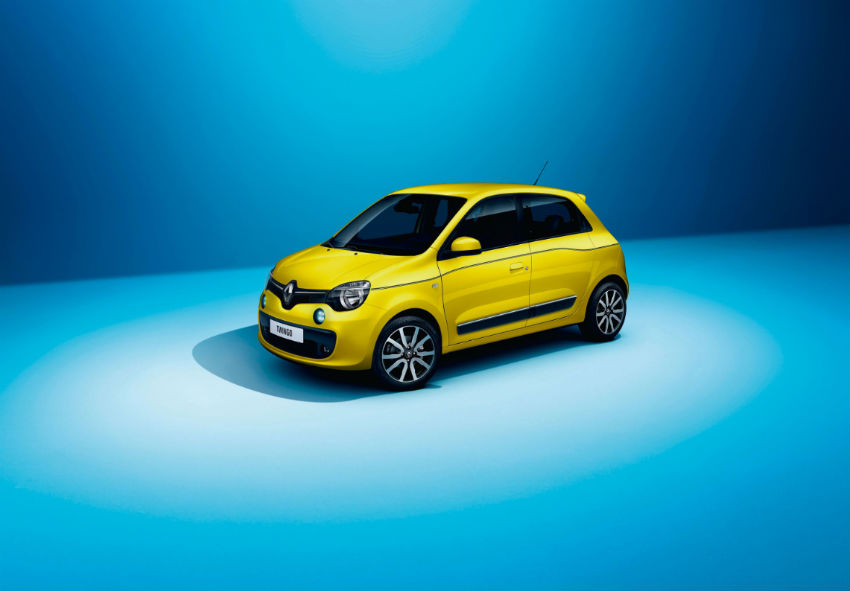 Inside, the uncluttered dashboard with white gloss trim includes a large speedometer and a central display with a blue, white, black or red surround. Coloured piping on the seats comes in red, blue or grey. Steering wheel inserts, air vents and door panels are picked out in white. The seat fabric and armrests can be blue, grey or red, with flecks of colour.

Or pick the sportier trim – “a black ambience combined with red highlights and mixed fabric upholstery.”

New Renault Twingo can also be personalised with 15- or 16-inch alloy wheels, and you can choose a large electric fabric sunroof as an additional extra – reminiscent of the Citroen DS3 Cabriolet.

“New Twingo’s interior features several distinct zones that are ideal for multiple personalisation permutations... The spirit of the original Twingo was a major inspiration for us when it came to colours and materials, and we have built on our experience with Clio and Captur to develop an ambitious personalisation programme.”

The new Twingo is the only city car to offer a choice of two multimedia systems and connectivity solutions: the R & GO radio (for use with a smartphone) and the latest generation R-Link Evolution®.

The R & GO® application, compatible with Android and iOS operating systems, can be downloaded for free by Twingo owners. It allows smartphones to connect automatically to the vehicle’s radio, giving drivers a menu of clear icons to access:

The R & GO® radio is supplied with a universal mounting, so you can place your smartphone on the dashboard at eye level.

Yes, it’s at the rear – but what of the engine itself? Fitting a modern engine into such a small space meant engineers had to rethink the engine configuration – reducing its height and angling it at 49 degrees.

New Twingo is available with two of Renault’s latest-generation engines:

While we don't yet have official figures, the Twingo is likely to offer close to 70 mpg, and CO2 emissions will be below 100g/km. 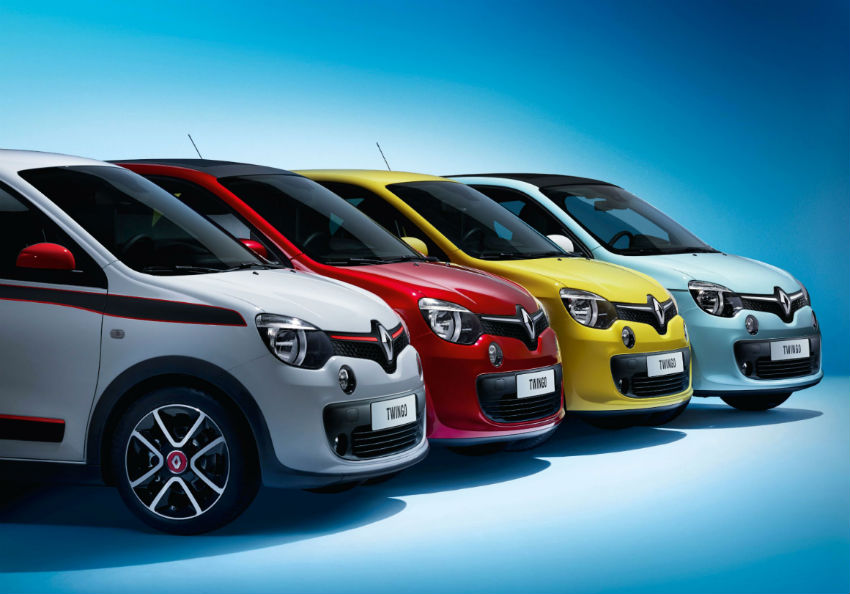 "You’ll be itching to get behind the wheel and take it out for a drive."