Vauxhall invites Tim Barnes-Clay to catch up with the new Astra Sports Tourer. 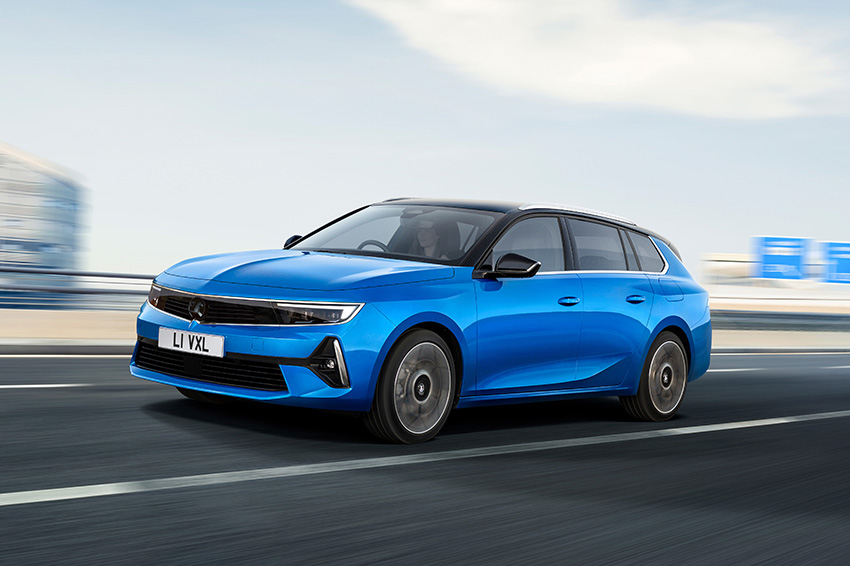 And, with the later receiving some impressive reviews, will the Sports Tourer follow suit?

Like the hatchback, the Sports Tourer is an entirely new build, using the same EMP2 platform as the likes of the Peugeot 308 SW thanks to a takeover by the recently formed Stellantis Group.

And, like other Vauxhalls, the Astra Sports Tourer has also had an overhaul in the looks department, sporting a far sharper shape and the new trademark 'Vauxhall Vizor'. 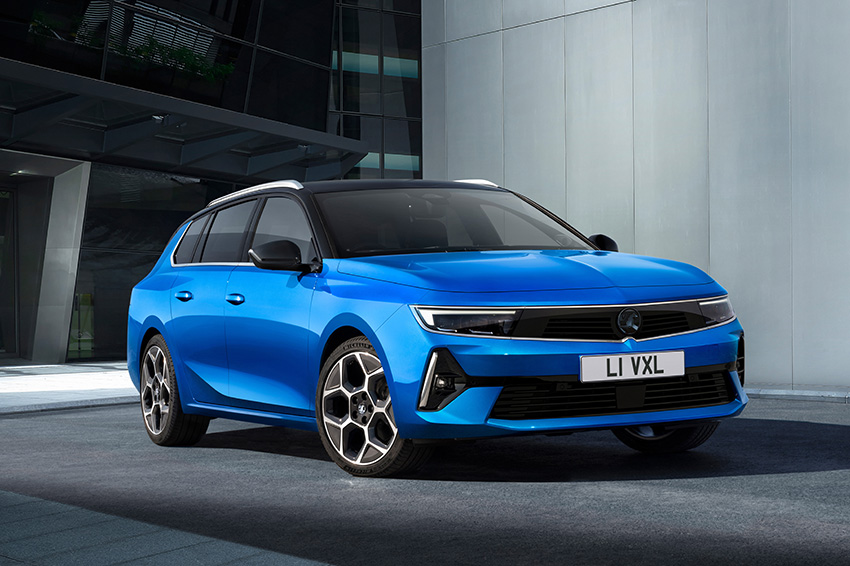 The Vizor may simply be a piece of glossy black plastic that runs along the front of the car, but it's become the centrepiece by which you can quickly identify all new Vauxhalls.

The revised shape features straighter lines and a far more imposing and athletic look than its predecessor. But how does it compare to other potential ‘lookers’ in its class? Well, next to a Volkswagen Golf, there's only one winner in my mind – and it isn't the Volkswagen.

While there are two petrol units and a diesel to pick from, we're looking at the PHEV (plug-in hybrid electric vehicle) – the HYBRID-e – which couples a 1.6-litre four-cylinder turbocharged petrol engine with an 81kW electric motor, producing a total of 180PS.

The Sports Tourer accelerates well off the line with great aplomb. Zero to the benchmark 62mph is done in 7.7-seconds – but it's not so fierce that you'll be thrown back into your seat.

The hybrid makes serene progress, with the engine cutting in smoothly and unnoticed when needed, while the road and wind noise is minimal. 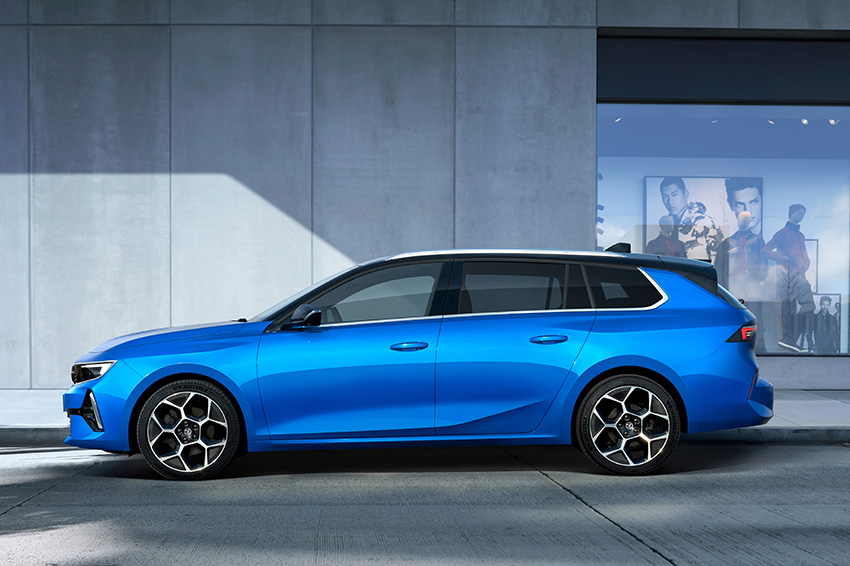 When you take your foot off the accelerator, the regenerative braking is well tuned, feeling moderate but consistent.

The handling is good, but the extra weight, thanks to the estate car's longer body, plus the batteries and electric motor, means it doesn't perform quite as well as the new Astra hatchback.

Chuck the Sports Tourer into a bend and it seems to resist a little. However, it still handles better than many other vehicles in its class. This is due to Vauxhall giving the Astra a firmer ride.

Despite the outwardly stiffer suspension, the estate car isn't uncomfortable. This is helped by the seats, which are designed to be as ergonomic as possible.

The driver's seat has 16-way electric adjustment, so finding a suitable driving position is simple enough, and you get a good view of the road. However, the rear pillars are on the thick side, which somewhat restricts your rearward vista.

You won't care about that, though. Why? Well, before you drive off, you'll want to savour the new Astra's interior. It looks stunning, with patterns, shaped surfaces and an excellent colour scheme that perfectly blends dark grey, silver and glossy black. 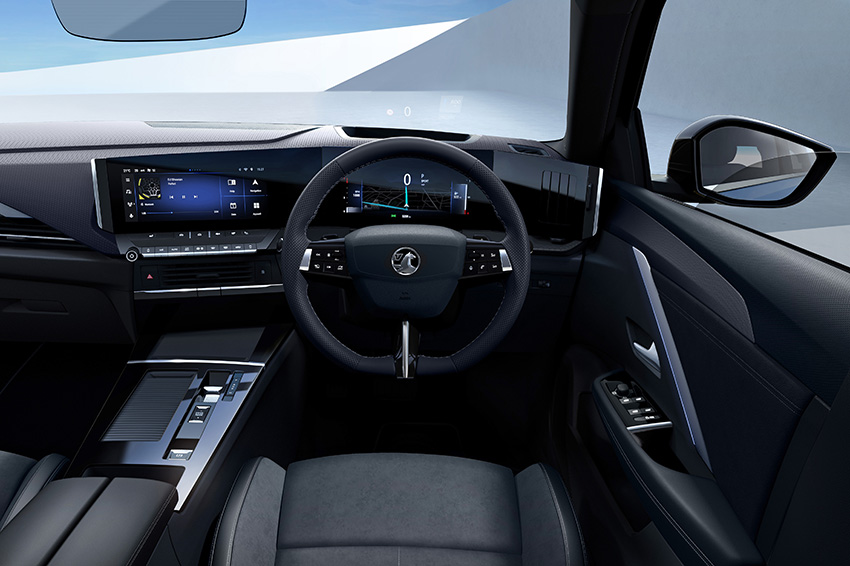 The 10-inch infotainment and Pure Panel digital instrument screens sit next to each other in one unit. Meanwhile, the infotainment system possesses sharp graphics and is responsive and reasonably intuitive to operate. There are welcoming physical buttons beneath the screen to control things like the climate control system, too.

Quality-wise, although some cabin materials feel thin and plasticky, it's the nicest-looking interior Vauxhall has ever produced.

There is a good serving of legroom and headroom in the car. Mind you, the 597 litres of boot space in the non-hybrids is reduced to 516 litres in the HYBRID-e. Also, unlike the non-hybrids, the PHEV doesn't get an adjustable boot floor.

The back seats fold in a 40:20:40 split, which is a nice feature given many cars only get a 60:40 configuration. This expands the available storage space to 1,553 litres.

In terms of fuel economy, if you keep the batteries charged up, you could get 256mpg. Meanwhile, CO2 emissions of just 25g/km mean a favourable benefit-in-kind (BIK) rate if your Astra is a company motor.

The HYBRID-e features a 12.4kW battery which provides a claimed 42 miles of all-electric driving, while charging takes two hours at a speed of 7kW.

A three-year, 60,000-mile warranty is offered as standard, with the battery covered by its own eight-year, 100,000-mile guarantee.

The Sports Tourer is yet to be crash-tested by Euro NCAP, but the hatchback earned a four-star rating earlier this year. The Griffin-badged vehicle scored 80 per cent for adult occupants, 82 per cent for children and 66 per cent for safety assists.

Vauxhall might be disappointed with the latter score, especially as all versions come with loads of kit. 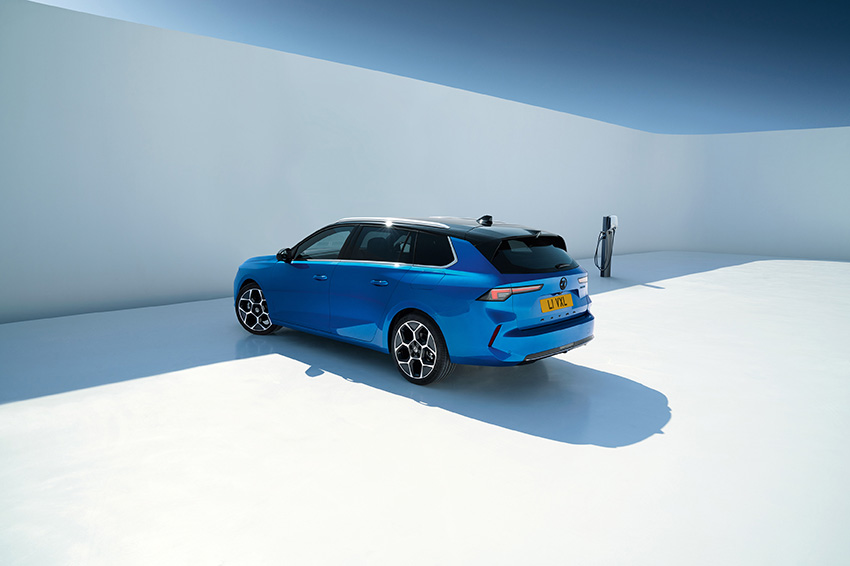 Overall, the Vauxhall Astra Sports Tourer is worth considering – and the HYBRID-e makes a lot of sense for the cost savings.

The interior looks are the coolest seen on a Vauxhall, and the car is well-equipped with a futuristic feel. At the same time, the exterior design – especially on the sportier-looking GS Line and Ultimate trims – makes this Astra the best-looking Vauxhall ever.

Not only that, but improvements in the performance, handling and overall design of the vehicle make it the best car Vauxhall's ever made, plus the hybrid has superb fuel economy.

Vauxhall says it's tried to give the Astra keener handling than the other cars that use the same platform in the Stellantis range. This works with the hatchback, but, on the estate, it's questionable whether it works as well or is necessary.

Nevertheless, while the 2022's Astra Sports Tourer might not blow your socks off, it's good enough to offer serious competition to the likes of Ford, Volkswagen, Skoda and SEAT.

And, regarding how far behind Vauxhall was a couple of decades ago, you really couldn't hope for a better result than that.