Prices open at just over £27,000 for this 118i and you'll choose between the brand's familiar 'SE', 'Sport' and 'M Sport' designations. A 6-speed manual gearbox is standard, or you can pay £1,350 more to get a dual-clutch 7-speed auto. Even the thriftiest 'SE' trim level gives you plenty; to be specific, 16-inch Star-Spoke alloy wheels, LED headlamps, LED front fog lights, Park Distance Control front and rear parking sensors, heated power mirrors, an alarm and auto headlamps and wipers. There's also a package of 'Active Guard Plus' camera-safety features. Inside, there's automatic air conditioning, cruise control with a braking function, an auto-dimming rear view mirror and a 'Sport' multifunction leather-trimmed steering wheel. In addition, there's the 'Drive Performance Control' system that, via 'ECO PRO', 'Comfort' and 'Sport' modes, allows you to alter throttle response, steering feel and, on an auto model, gearchange timing, all of it better suiting the way you want to drive. You'll want to know about infotainment and media stuff too - there's lots of it. Let's start with the fact that all mainstream 1 Series models come as standard with the brand's 'BMW Live Cockpit Plus' package, which gives you an 8.8-inch centre-dash display, your access point for a navigation system, Bluetooth with audio streaming, 4G LTE connectivity, an on-board computer and a decent quality six-speaker 100-watt DAB stereo. There's also a 5.1-inch display in the instrument cluster and an Intelligent Voice Assistant.

The engine range on offer across this third generation 1 Series line-up may not look very different to what was on offer before, but BMW is keen to point out that every single TwinPower Turbo unit has been subjected to significant efficiency fettling - as was necessary to match a class standard vastly improved since the days of the previous 'F20'-generation model. The three cylinder petrol unit we're trying here in this 118i variant for instance, is 5kgs lighter than it was previously. It all explains why the fuel and CO2 stats delivered by mainstream 1 Series models are now virtually identical to those of directly equivalent Mercedes A-Class variants - we know, we checked. Which is another way of saying that the stats of this BMW are difficult to better in the segment - which wasn't previously the case with this model line. Let's get specific with figures, all of which, as usual, are based around the WLTP readings for fuel and CO2 that see this car in manual form managing up to 49.6mpg on the WLTP combined cycle and up to 130g/km of WLTP-rated CO2. Get it as an auto and figures are much the same. 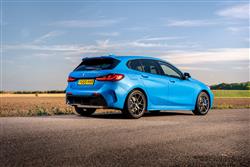 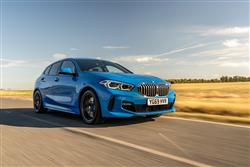 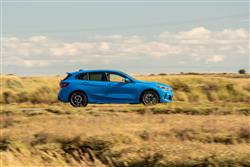 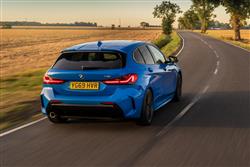 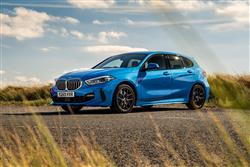 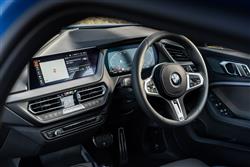