The third generation BMW X6 looks broadly similar to its predecessor, but don't be fooled by the lookalike silhouette. It's bigger, more powerful and more efficient than before. Love it or hate it, you have to respect a vehicle that's sold in such numbers and which has evolved into something rather special.

Has there been a more divisive car than BMW's X6 launched in the last decade? Possibly not. The original 'E71'-series first generation version debuted back in 2008 and the formula was pretty simple. It was basically an X5 with a coupe-style sloping back. Lots of people got very aerated about this, claiming that here was a car with the handling shortcomings of an SUV coupled with the limited practicality of a coupe; the worst of both worlds. But then the X6 sold and sold in serious numbers. In fact, BMW shifted more than a quarter of a million of the things before launching a smoother-looking 'F16'-series second generation model in 2014, which nearly doubled that sales tally before this MK3 'G06'-series version was introduced in mid-2019. It's got more competition now, thanks to the arrival of the Audi Q8, the Porsche Cayenne Coupe and a second generation version of the Mercedes GLE Coupe. Can this MK3 model X6 hold its own against cars as good as those?

You've probably got used to the X6's shape by now and you'll also have got used to BMW's spectacularly cumbersome naming conventions for its SUVs. The X6 range consists of a couple of diesel versions and a couple of petrol variants. Most, as before, will want the xDrive 30d diesel derivative, which puts out 265hp, though BMW also expects a following for the faster M50d diesel, with its more potent 400hp version of the same 3.0-litre six cylinder unit. Your petrol options vary between a 340hp six cylinder xDrive 40i model and two top models that use different versions of BMW's 4.4-litre twin turbo V8, the 530hp M50i and the top, barnstorming 616hp X6 M. The X6 M can make 62mph in just 3.8s. Even the base xDrive30d diesel can do it in just 6.5s. All the engines come mated to a standard eight-speed automatic gearbox. And in every case, the ride remains on the rather firm side of comfortable. All variants have BMW's intelligent all-wheel-drive system which as usual has a rear-wheel bias. In situations that don't require all-wheel drive, power can be channelled entirely to the rear wheels in the interests of efficiency. The car's sporting attributes are aided by the electronically controlled M differential lock at the rear axle, available either individually as an option or as part of M Sport specification to deliver sharper handling. Added to which, the controlled locking function for the rear differential maximises traction and increases the car's ability to put down its power on rough ground. A feature of the optional xOffroad package, it also optimises traction on roads where grip levels vary between the right and left rear wheels by preventing a wheel with insufficient grip from spinning.

This MK3 X6 sits 6mm lower than its predecessor and is also 26mm longer and 15mm wider for a wider, more assured roadway stance. BMW reckons the X6 combines "the robust presence of a BMW Sports Activity Vehicle with the hallmark sporting elegance of the brand's Coupes to create an unmistakably athletic appearance". That might be the case if you consider an American football player or a pro-wrestler to be athletes. It's hefty. The silhouette looks much as before and the car squats over its wheels like Konishiki in the sumo circle. The initial shock at the car's styling has dissipated somewhat, and with the right colours and wheels, the X6 can even look quite handsome, the deeply sculpted flanks incorporating the Air Breathers which work better here than on a 4 Series Coupe. The cabin sits you high and commandingly and is much as it is in an X5. You get the same 12.3-inch screens for the instrument binnacle and the centre of the dash as are fitted to that car. And the same quality ambiance, with its supple leather upholstery and faultless build quality. Two adults can comfortably accommodated in the back. And there's a decently-sized 580-litre boot, expandable to 1,525-litres if you fold the rear seats.

Prices start at around £60,000 for the base xDrive 30d diesel variant with 265hp; there's also a 400hp M50d diesel version for just under £75,000. The petrol options start with the 340hp xDrive 40i. Then there's the M50i with 530hp for around £77,000. And the top X6 M with 616hp for around £113,000. As you'd expect given these premium asking prices, all variants get an extremely high standard of spec, including 'Vernasca' leather upholstery and ambient lighting. If you're looking at the xDrive 40i petrol or xDrive30d diesel variants that most customers choose, then you're almost certainly going to want to budget just under £5,000 more to upgrade from standard 'Sport' to more dynamic-looking 'M Sport'-spec we tried. As for interior features fitted across the range, well there's 'Vernasca' leather upholstery, ambient lighting and a HiFi loudspeaker system. Plus the brand's 'Live Cockpit Professional' package, which gives you a high-resolution instrument cluster behind the steering wheel with a screen diagonal of 12.3 inches and a 12.3-inch Control Display. This BMW Live Cockpit Professional also features an adaptive navigation system and a hard-drive-based multimedia system, along with two USB ports plus Bluetooth and WiFi. When it comes to options, you'll need to consider the 'Adaptive M suspension Professional' (anti-roll control), 'Integral Active Steering' (4-wheel steering) and 'M Sport differential' packages. Plus there's an optional 'xOffroad pack' that gives you a series of transmission and suspension settings for various different surfaces In terms of non-driving stuff, we'd want to look at the panoramic glass roof (83% larger than before); or even better, the huge Panorama glass 'Sky Lounge' roof.

The X6 makes a great riposte to those who still rail against big, inefficient vehicles. While it would find it difficult to deny the charge based on size, it's anything but inefficient. All model variants now comply with the requirements of the latest EU6d-TEMP emissions standard. The system of emission control for the petrol engines includes a gasoline particulate filter, while the diesel models boast BMW BluePerformance technology comprising a particulate filter, an oxidation catalyst, a NOx adsorption catalyst and an SCR catalyst with AdBlue injection. As a result, the petrol xDrive40i delivers up to 35.3mpg on the WLTP combined cycle and NEDC CO2 emissions are up to 181g/km. The xDrive30d diesel returns a combined fuel consumption of up to 46.3mpg, equating to CO2 emissions of up to 159g/km. The M50d meanwhile, posts a combined fuel consumption of up to 40.9mpg and CO2 emissions of up to 181g/km. You'll need deeper pockets to run the petrol M50i variant of course; this delivers a combined fuel consumption of up to 27.2mpg and CO2 emissions of up to 237g/km What else might you need to know? Well, routine maintenance is dictated by 'Condition Based Servicing' that monitors oil level and engine wear, taking into account how long it's been and how far the car has travelled since its previous garage visit. You can check all of this using menus in the 'iDrive' centre-dash display and the car will give you four weeks' notice of when a check-up is needed so you have plenty of time to book it. To help plan ahead for the cost of regular work, at point of purchase you'll be offered a 'BMW Service Inclusive' package that lasts for three years and 36,000 miles.

When you pause to consider it, the BMW X6 shouldn't really have caused such controversy. It's a bit like getting hot under the collar about a 4 Series Coupe when you can buy a perfectly practical 3 Series Touring for less. They're not the same thing, the buyers aren't the same and BMW ought to be congratulated for having the savvy to spot this latent demand. Even if it's not your thing, and there are many who will put their hand up to that, the X6 deserves a certain measure of respect. This third generation model doesn't diverge too markedly from the template laid down by its predecessors. It's just better in every measurable regard; more powerful, more economical, quicker, bigger and less polluting. It's also built of superior materials, is arguably a bit better looking and comes with some tempting high-tech options. Admire it for what it is. The X6 isn't going away. 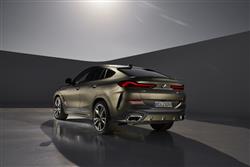 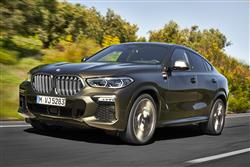 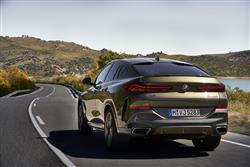 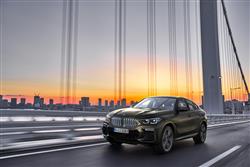 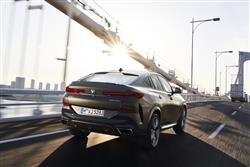 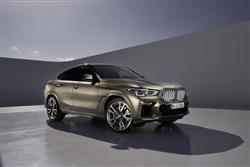