Everything you need to know about pedestrian crossings

Do you know the difference between a puffin and a pelican? Find the answers in our complete guide to road crossings. 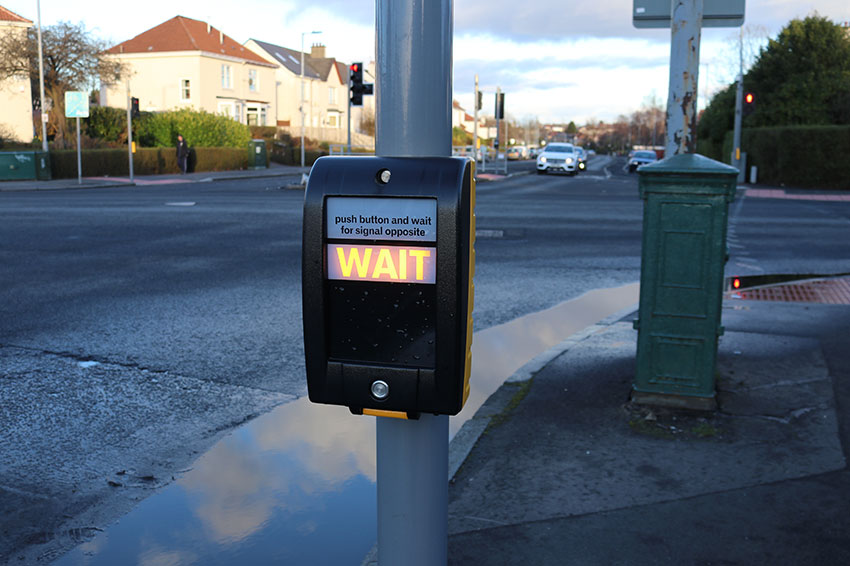 Everything you need to know about pedestrian crossings

In the UK, we have a variety of crossings to help people reach the other side of the road, with most incorporating easy-to-recognise lights and signals. But it’s not all about the pedestrian; drivers have to take responsibility to act appropriately at every crossing with clear crossing guidelines set out in The Highway Code.

But do you know a toucan from a pelican? And what is a puffin crossing anyway? 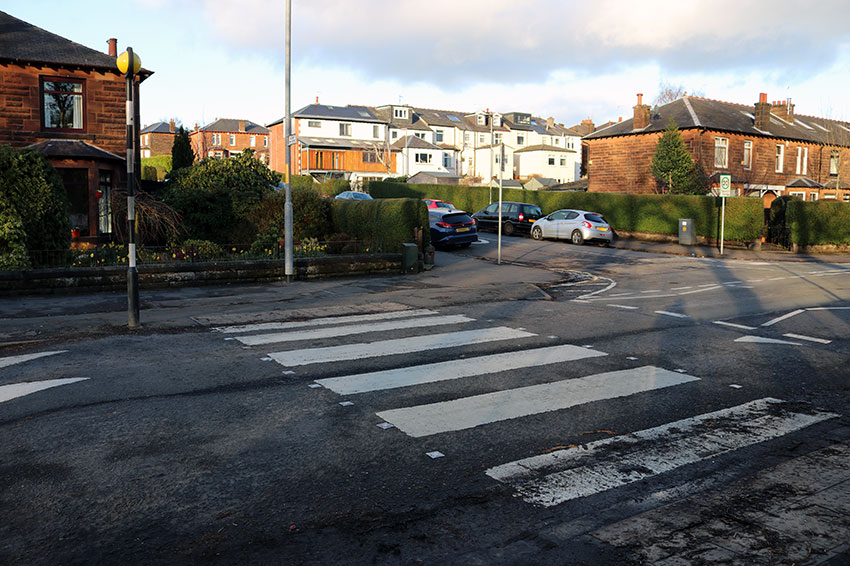 What is a zebra crossing?

A zebra crossing features a series of black and white stripes painted across a road (a bit like the markings of a zebra). Sometimes, these crossings are raised to be level with the pavement. Zebra crossings also have round, amber-coloured lights at either side, mounted on black and white-striped poles. These are called Belisha beacons, named after Leslie Hore-Belisha, the Minister for Transport who introduced them in 1934. While the beacons were previously traditional lamps, on newer crossings they have been replaced by rings of LEDs, which are more visible, and more energy efficient.

How do you cross at a zebra crossing?

A zebra crossing is the only crossing where the pedestrian automatically has the right of way once they have stepped out. The Highway Code advises that pedestrians allow traffic plenty of time to see them before starting to cross and to keep looking while crossing, just in case a vehicle attempts to overtake a stationary vehicle. If there is an island in the middle of the crossing, each half should be treated as a separate crossing and the same rules should be followed.

How should a driver approach a zebra crossing? 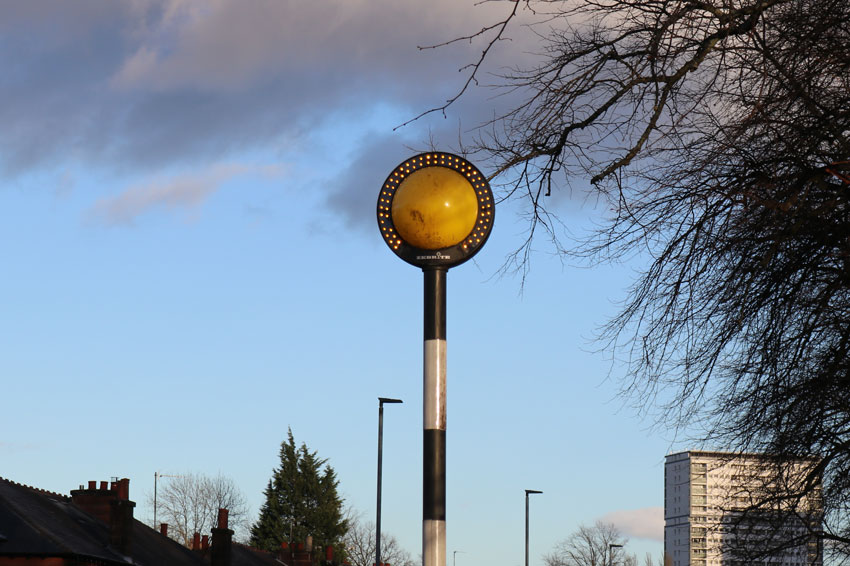 With Belisha beacons, drivers should see the crossing well in advance. They should approach with caution and be aware that traffic may come to a halt, as vehicles closer to the crossing could stop to let someone cross. When stopped at a crossing, drivers should allow any pedestrians to reach the other side of the crossing before moving off. 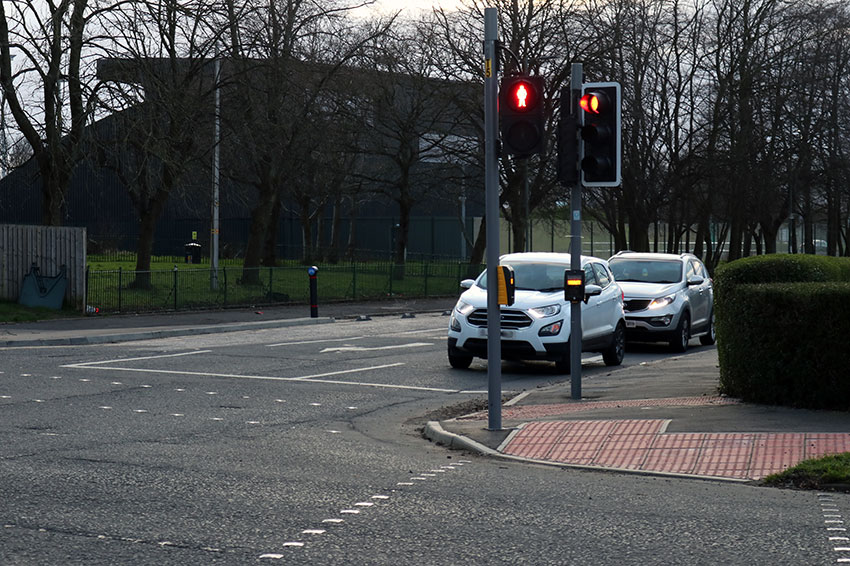 What is a pelican crossing?

Previously known as a PELICON crossing (a portmanteau of PEdestrian LIght CONtrolled), the pelican was first introduced to UK roads in 1969. It incorporates traffic lights to signal to drivers and a push button on either side of the road for pedestrians. As standard, the crossing is 2.8 metres wide.

Pedestrians press a button at the side of the crossing, and after an interval, the traffic lights change from green to red, signalling for drivers to stop. When a green walking person replaces a red stationery person on the far side of the road, it is safe to cross. The green person will start to flash after a predetermined amount of time. This will coincide with a flashing amber light for the drivers signalling that they can proceed if the crossing is clear.

In 2016, the Department for Transport introduced updated the Traffic Signs Regulations and General Directions to advise that new pelican crossings should not be installed on public highways. While thousands of pelican crossings remain in use throughout the country, most new crossings today are puffins, with some exceptions where near-side signals are dangerous.

How do you cross at a pelican crossing?

Walk up to the crossing and press the button on the control panel mounted on a post. The panel should light up in amber with the word ‘wait’ once the button has been pressed. The pedestrian should then look across the road where a light signal shows a red stationary person. Once that signal changes to a steady green person, check that traffic has stopped and begin crossing the road. After a set interval, the green man will begin to flash. If you are already crossing then you should continue to the other side of the road. If the green person is flashing when you arrive, you should not begin crossing. Instead, push the button and wait for the next cycle.

How should drivers approach a pelican crossing?

Drivers should treat the traffic lights at a pelican crossing like any other traffic signal. They should approach with caution, slow down when they see an amber light and stop when the light turns red. When the amber light begins to flash, drivers can proceed only if there are no pedestrians on the crossing. If someone is on the crossing when the lights are flashing, the driver should wait until they have reached the other side of the road before moving off. 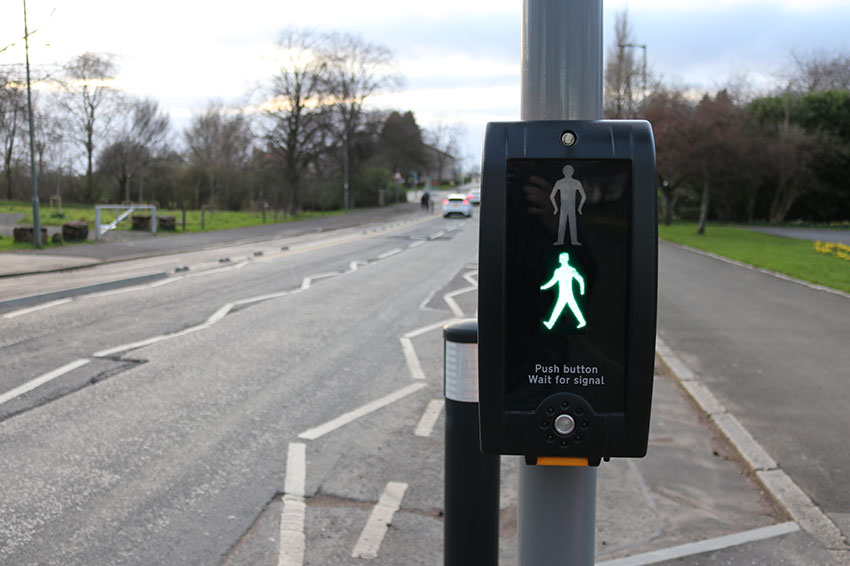 What is a puffin crossing?

The puffin crossing – which doesn’t quite stand for pedestrian user-friendly intelligent crossing – was first introduced in 1996 as a replacement for the pelican crossing. The main distinction is that the pedestrian signals showing the green person and red person are on the same side as the pedestrian and usually mounted on the same pole as the push button. This means that pedestrians are looking directly towards approaching traffic before they cross, rather than across the road. Puffins also use sensors to detect when people are waiting to cross and if there is anyone on the road. This means that the light sequence is controlled based on how long it takes someone to cross the road, rather than a pre-set interval. Just like a pelican crossing, the standard width of a puffin crossing is 2.8 metres.

How do you cross at a puffin crossing?

How should drivers approach a puffin crossing? 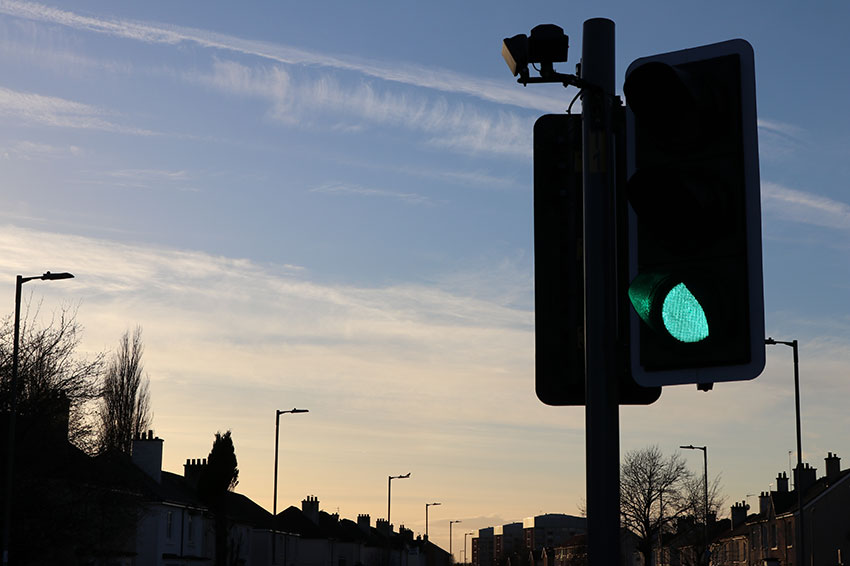 Drivers should approach the lights with due care and attention and be aware that they may change from green to red, particularly if they can see someone waiting to cross. Thanks to the sensors, a puffin crossing does not have a flashing amber phase, meaning that drivers should proceed once the lights have turned green and the crossing is clear. 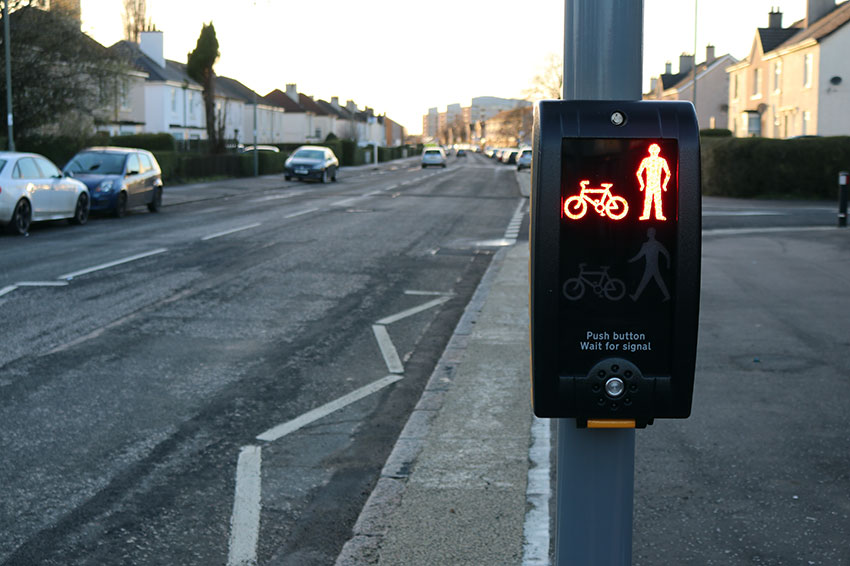 What is a toucan crossing?

A toucan crossing, so called because two-can cross (and the Department for Transport is whimsical), is designed for both pedestrians and cyclists. These are usually found along cycle-ways and unlike other pedestrian crossings, mounted cyclists can legally cross. It follows the same basic principles as the puffin crossing and often has two sets of buttons – one for pedestrians and another at the correct height for mounted cyclists. Instead of just a red person and green person, the pictograms will also show a bicycle. As multiple streams of traffic can cross the road, a toucan crossing is wider than a puffin or pelican crossing at 4 metres.

How do you cross at a toucan crossing?

Cyclists should come to a stop and push the designated button. Cyclists will usually have their own button mounted on a post on the opposite side to the pedestrian button. A red bicycle light will show beside a red man when road traffic has the right of way. Unlike other crossings, cyclists can stay mounted on their bikes when crossing. To allow for a safe crossing, both cyclists and pedestrians should cross in a straight line and try to avoid crossing paths.

How should drivers approach a toucan crossing? 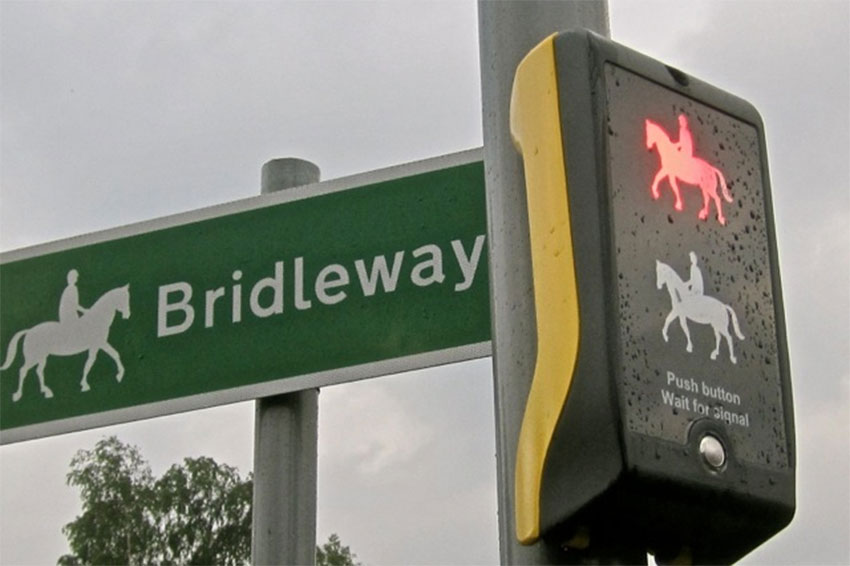 What is a pegasus crossing?

A pegasus crossing, sometimes known as an equestrian crossing, is a push-button controlled crossing system which is usually found along bridleways and can be used by both pedestrians and riders mounted on horses. There are normally two sets of control panels; one for pedestrians (as on a puffin crossing) and one mounted two metres off the ground for mounted riders to press. These crossings may also feature fenced enclosures to keep the horses at a safe distance from the road before crossing. The pictograms feature red and green horses and riders as well as the standard green and red people.

How should pedestrians and equestrians approach a pegasus crossing?

Horse riders to not have to dismount in order to cross at a pegasus crossing. After they have pushed the button, they should remain a safe distance from the road before crossing. If there is an enclosure, the horse and rider should wait there until the light signal turns green and it is safe to cross. It is important to keep to one side of the road when crossing and to be aware of fellow road users, whether they are walking or riding.

How should drivers approach a pegasus crossing?

Drivers should follow the rules of the road and stop when a red light shows and proceed when it is green. Signage will indicate that there is a pegasus crossing ahead and it is important for drivers to avoid driving aggressively, revving their engines or sounding horns unnecessarily where large animals could be startled. 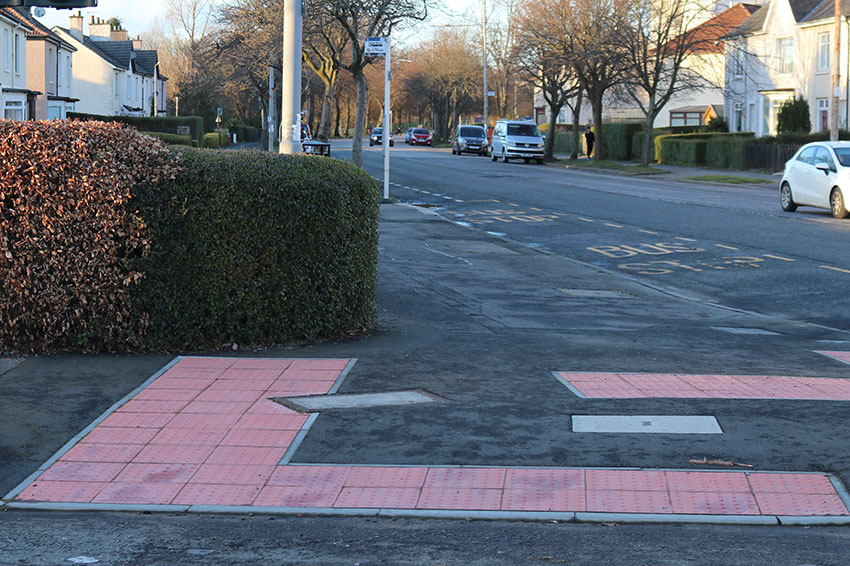 When standing at crossings, you may have noticed bumps on the pavement under your feet. These blister surfaces at pedestrian crossings provide a warning to people with visual impairments to indicate that there is a crossing and to help them differentiate the difference between the pavement and the dropped kerb. They are installed in an L-shape with the corner of the ‘L’ used to indicate where the push-button controls are to activate the crossing.

In order to provide a signal to those with visual impairments, many crossings make a continuous beeping sound when it is safe to cross. For safety reasons, audible signals are not used on all crossings, such as roads where there are multiple crossings within close proximity, or where crossings are split by an island. 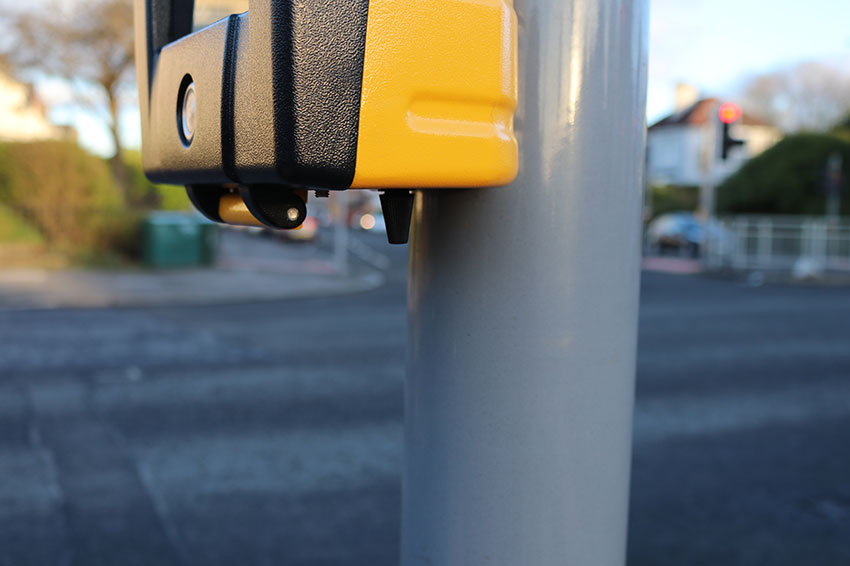 Rotating cones were first introduced to pedestrian crossings in 1989 after Nottingham University took the idea to the Department for Transport. The cones are there to help people with visual impairments cross the road. The cone starts to rotate as the signal turns green, indicating that pedestrians have the right of way. Surprisingly, these are not fitted to every crossing by default but local authorities are encouraged by the Department for Transport to use them on puffin, pelican and toucan crossings wherever possible.

Can you cross the road where there is no crossing?

While there are certain roads where pedestrians are not permitted, such as motorways, there is no UK law banning jaywalking and in general, people are free to cross where they choose. The Highway Code features guidelines specifically for pedestrians when they are crossing – this is known as The Green Cross Code and features five steps to help adults and children cross roads safely.

Everything you need to know about speed cameras