Find out about the stunning new SUV from this stand-alone brand. 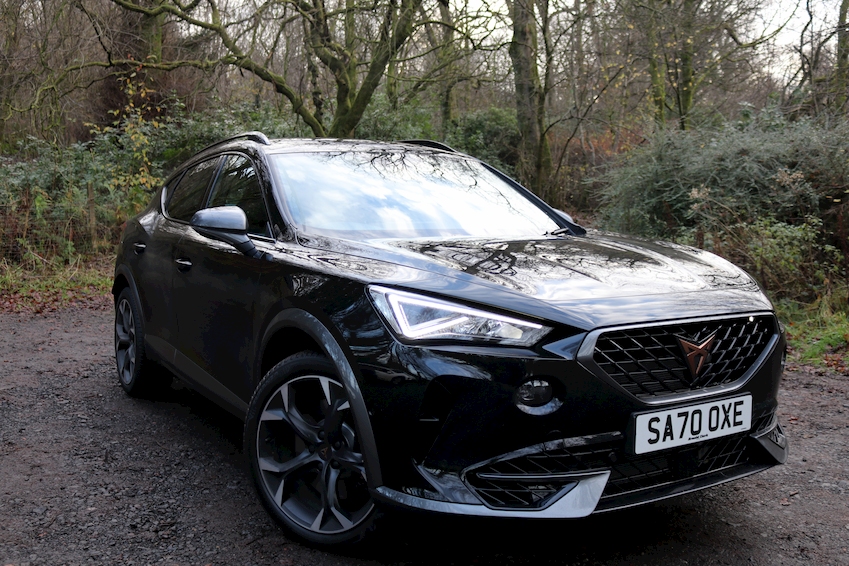 The CUPRA Formentor’s bold, strong build means it looks from the outset like a car with attitude, and even against Glasgow’s ubiquitous grey skies, its midnight black colour still shines on the forecourt. And, judging by the looks of passers-by, equally when it’s out on the road.

Its aesthetic is awesome; a brand-new badge and chrome-lined honeycomb grille, combined with a robust bumper and air intakes to cool the engine, are a picture of excellence. And rest assured, its cool angular LED headlights are standard across the Formentor’s six trim options. 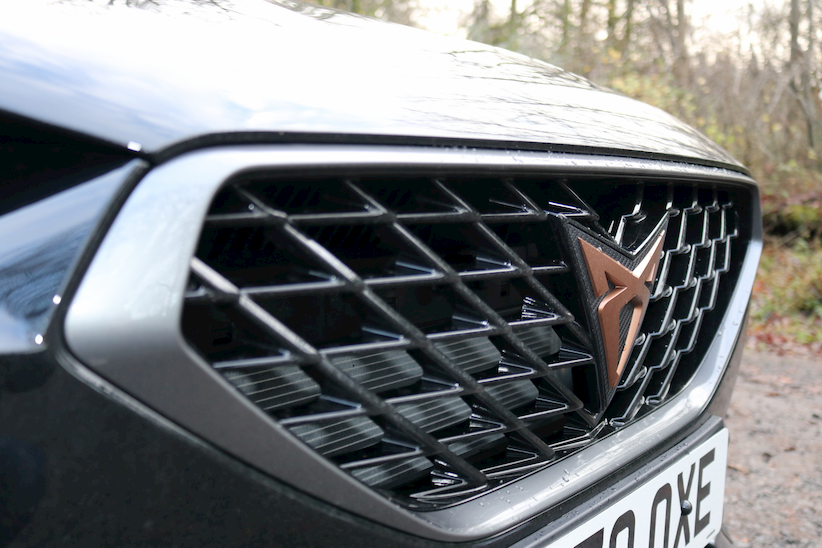 Onlookers will also notice the car’s 19-inch alloys, finished in the range-topping VZ3 spec (the subject of this test drive) in the ‘Exclusive’ copper and black design.

Another defining feature in the Formentor is its noticeably raised body position, meaning the positive vibes will continue in the cabin with a commanding position for the driver and any passengers who don’t travel well – and that’s before even a glance at the Formentor’s top tech and thoughtfully considered interior design.

The model from Arnold Clark Royston CUPRA/SEAT is the petrol, 310bhp automatic, in VZ3 trim – and you can feel that power when you take to the M8 for some cross-city driving. The automatic dual switch gearbox (DSG) makes quick work of climbing to the speed limit despite the Formentor’s broad-shouldered SUV build.

The first interior feature to get to grips with is the squared-off sports-style steering wheel, featuring two large circular buttons among the other volume and data dials: the ignition on the right, and the Cupra-branded Sport mode button on the left. And while the deep engine roar you hear is admittedly artificial, the added punch you feel as a driver from the 2-litre engine in Sport mode is the real deal. And for a taste of conventional shift, you can switch gears using paddles around the steering wheel. 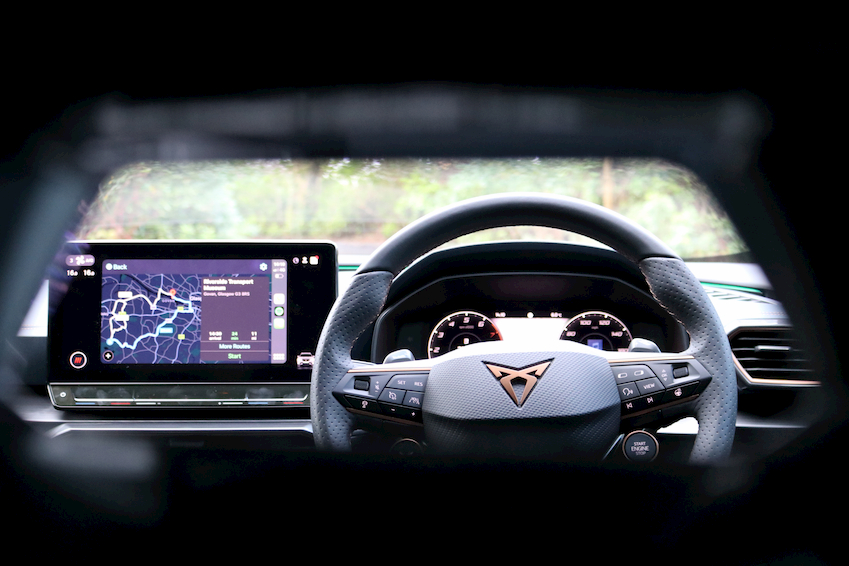 But if the Formentor’s speed is a step-up from your city car or hatchback norm, don’t worry. In the VZ3 trim, the super-responsive Brembo brakes quickly bring you back to a settled speed for urban driving. But it’s good to know that if you need that extra injection of pace, it’s literally at the touch of a button.

Look beyond the snazzy steering wheel and the interior bliss continues. The Formentor’s digital cockpit comes as standard, as does a tremendous 12-inch touchscreen infotainment system, and app pairing means you can plot your destination and track your route onscreen. In the VZ3, wireless charging is another big boost, with its rubber surface to stop your devices sliding around when it doubles up as a storage cubby.

That screen comes in handy when you come to park the Formentor: the reversing camera is activated when you shift to reverse and gives excellent picture quality – complete with visual guides.

Ambient lighting is another high-end detail, with a thin red rod lining the car doors and the gap between dashboard and front windscreen. But it’s not just inviting, it’s intelligent, too. Drive through a tunnel and the red bar suddenly lights a vibrant green, before subtly shifting back to red on returning to natural light, showing this serious-looking SUV’s quirky side. 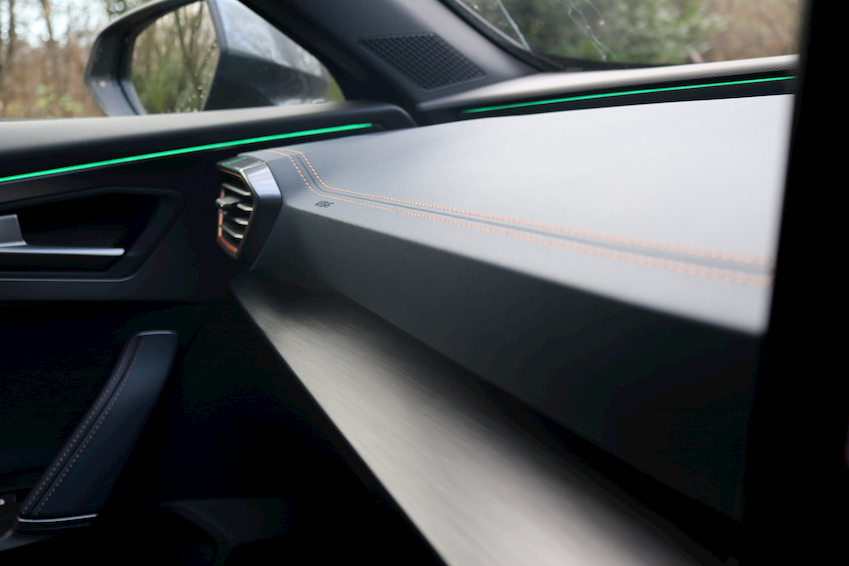 The driver and front passenger can both sit back and enjoy another touch of sporty styling, with the front’s sports seats magnificently designed with an hexagonal, chrome-lined hole towards the top of the seat, sure to allow better ventilation on longer drives. And, when combined with the almost regal dark blue colour and copper-coloured stitching, it’s a very eye-catching aesthetic feature.

Those seats are more than just pretty – they have comfort and functionality at their core, with electric adjustment for both front seats, including lumbar support. 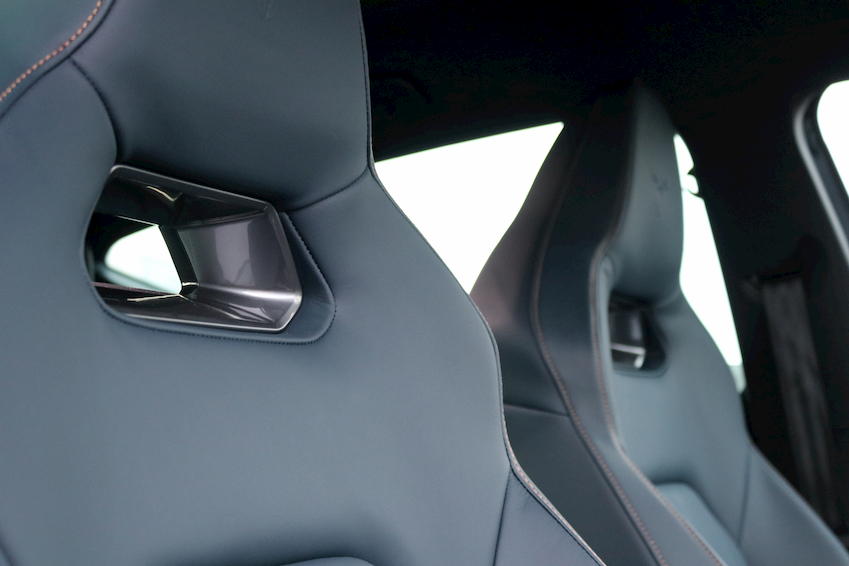 But for those important planned drives, how does a key element like boot storage match the car’s punch and performance? Well, there’s an electronic boot, closed at the touch of a button, with 420 litres of space that’s perfect for family days away, business trips, car-pooling for sport, or even for humdrum weekend errands.

CUPRA has truly uncoupled itself from SEAT where it had sub-brand status. And judging by how it feels to drive the formidable Formetor, it’s doing just fine on its own four wheels. 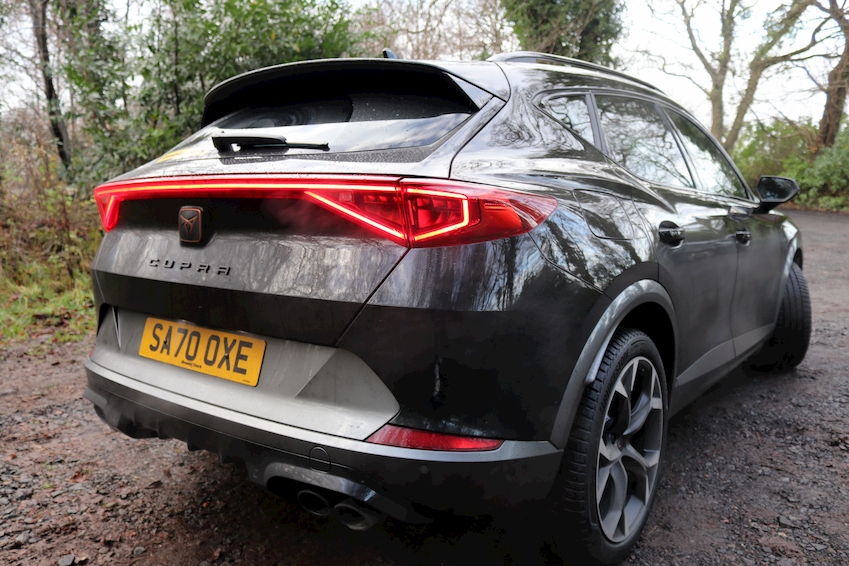