Eddie Hawthorne talks about the future of petrol and diesel vehicles 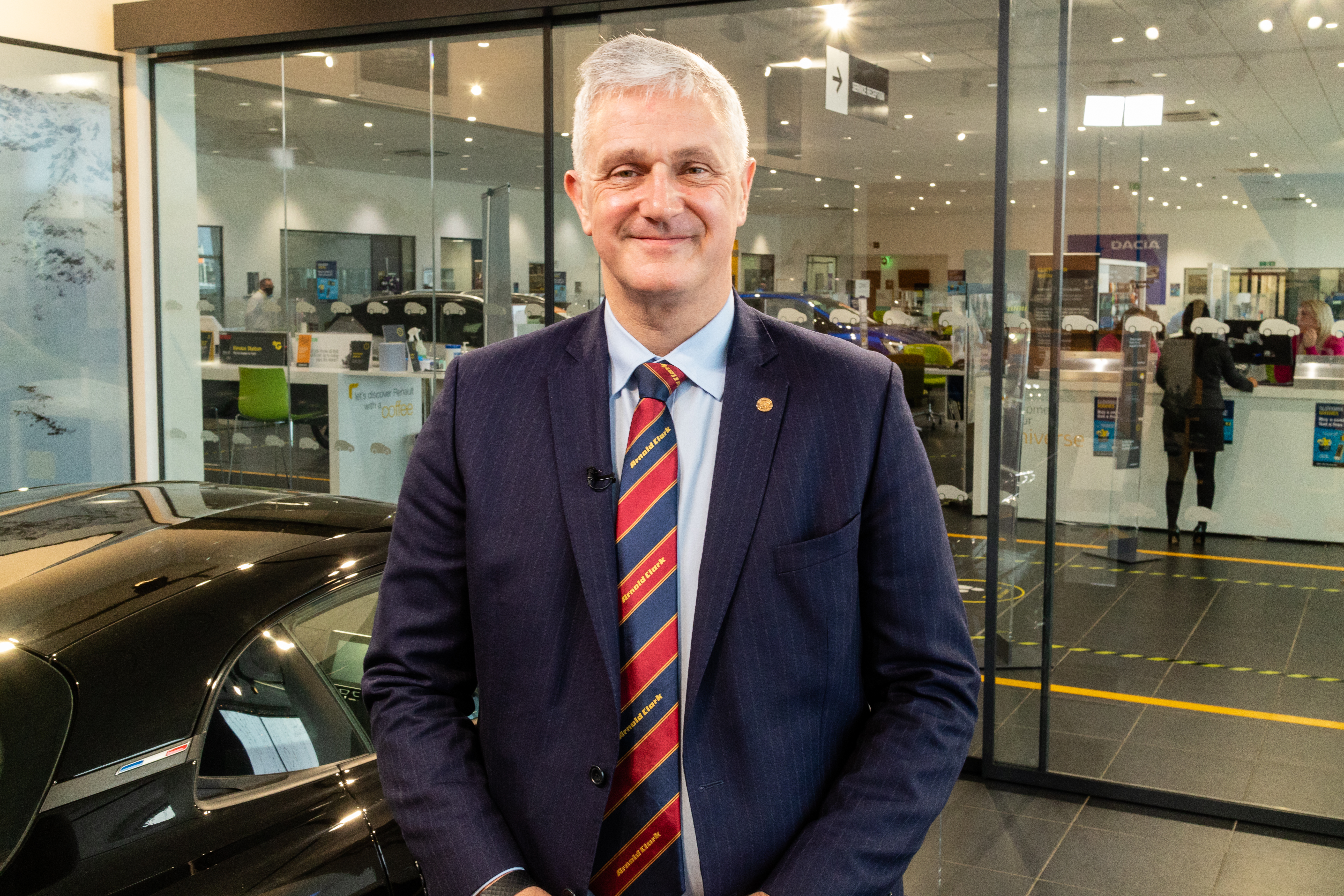 Eddie Hawthorne discusses the future of petrol, diesel and electric cars in light of the 2030 petrol and diesel car ban.

As part of the Government’s ‘green industrial revolution’, UK sales of new petrol and diesel cars and vans will stop in 2030 – a decade before the original 2040 deadline.

The impact will be huge for drivers across the country. But how will it affect Arnold Clark? Jim McGill spoke with Eddie Hawthorne, Arnold Clark Chief Executive and Group Managing Director, and discussed electric vehicles; charging infrastructure; the Arnold Clark Innovation Centre; the all-electric range and prices of new EVs; the continuing sales of used petrol and diesel cars post-2030 and whether we’ll actually have anything to plug our new EVs into?

Jim McGill: Did the Government consult with major automotive groups/bodies and manufacturers ahead of the announcement – and did it come as a surprise to you?**

So no, we weren’t really consulted about it. Was it a shock to me? No, probably not. I think this drive towards decarbonisation has been on the agenda for quite a while and I think it’s something for everybody to strive for.

JM: I would imagine Arnold Clark is committed to helping to lead the decarbonising of road transport?

EH: Arnold Clark is definitely committed to decarbonisation. But it’s not just with us. To achieve the decarbonising of road transport, it really requires the need for a combined approach across the various sectors.

JM: Will fast-tracking the ban on the sale of new petrol and diesel cars and vans from 2040 until 2030 have a direct impact on Arnold Clark?

EH: It won’t really affect Arnold Clark in any way. We’ve set ourselves up as a transport provider. If it moves, we’ll sell you it, lend you it or lease you it. It doesn’t really matter what the powertrain is for me. We’re very much into making sure that people have the mobility they require, and we can provide that transportation, or that mechanism of transport that they choose to come to us for. So from an Arnold Clark perspective, we’ll be set up and ready for 2030.

JM: The big question on most car buyers’ minds is, ‘can the charging infrastructure to support a massive rise in EVs be put in place by 2030?’.

EH: There’s no denying that currently the infrastructure is not there. Bringing the ban on sales of new petrol and diesel vehicles forward by 10 years is going to be a huge challenge for the manufacturers. They have production plans and development schedules which are planned well in advance, so to bring it forward 10 years may give them a bit of a headache. But it’s more the infrastructural side of charging the electric vehicles that I think we need to make sure there’s a joined-up approach on. At the moment there doesn’t seem to be.

JM: Is the lack of charging infrastructure one of the main concerns of customers considering switching to electric vehicles?

EH: It’s definitely one of the biggest challenges customers have today when it comes to choosing an alternatively fuelled vehicle. Firstly they are not sure of the range of the EV, and secondly the prices are a bit higher than their comparable normal, conventional internal combustion engine (ICE) vehicles.

JM: Do we need a universal charging system?

EH: There’s no doubt one of the biggest challenges is the fact that in terms of the charging mechanisms, there isn’t a universal charging system. That’s what I believe we need to get to. Legislation was passed earlier this year or last year which basically said, all public charging points should be accessible to everyone. Well it’s not really the case at the moment.

So generally, as an industry, and if we really want to get to achieve this level by 2030, I would push for a kind of chip and PIN system for charging. No matter what your bank is, the chip and PIN will work with any card. I think that’s where we really need to try and get to as an industry.

JM: Only around 1% of new cars purchased today are pure electric vehicles. What do you believe is required to persuade new car buyers to switch to EVs?

EH: One word: education. That 1% will definitely grow. But again there are a lot of myths and misconceptions about EVs. And this is something we as an industry need to educate our customers about, which is what we’re trying to do.

We’ve invested well over £5 million in our Innovation Centre in Glasgow. It’s not a site we are selling anything from. It’s specifically an innovation, information and educational centre. Arnold Clark customers will know we have ‘Product Geniuses’, and I have five specific Geniuses who man that site, which displays alternative fuel vehicles from all the manufacturers we represent, plus some we don’t. We currently have — or will very shortly — 60 vehicles onsite. These include fully electric, plug-in hybrids, hybrids, and commercial vehicles that are also alternatively fuelled.

We’ve also decided to partner with a number of experts to get the facts over to our customers, including Transport Scotland; OLEV; Scottish Power; Energy Savings Trust; and Go Ultra Low; and we’re working with them to get the right information to our customers when they purchase, or when they consider one of these alternatively fuelled vehicles.

We ask the right questions. ‘What’s right for you? What do you need? What’s the best vehicle and package that works for you?’ And then obviously we want to talk to them about charging, infrastructure, where they’ll charge it, and that’s why we’re partnering with other people.

What we’re trying to do at the Innovation Centre is just showcase everything that’s out there, and it’s not just about electric vehicles.

JM: Do you have charging points at all your dealerships?

EH: Yes, we do. And where we don’t have them ‘live’, we are in the process of installing them.

We are required by the manufacturers to have them, but we’re installing them because of our own choice anyway.

JM: Prospective EV buyers have concerns about range and purchase costs. How do you alleviate those concerns?

EH: It comes down to sitting with the customer and actually saying, ‘what is it you specifically need?’ It depends on the use of the vehicle and how long they’re going to have it. We can sit down and have that conversation with them once we know more about them.

JM: Given currently more than 75% of new cars sales are PCPs, would you expect sales of EVs to become even more monthly payment-based? This, combined with fuel saving could initially make the purchase transition more affordable for buyers.

EH: There’s no doubt about it – the cost of an alternative fuel vehicle compared with a normal petrol or diesel car is more expensive. So you’re right: PCP will be the way to make it more manageable for a lot of people. But we still have to narrow the gap. And we have some way to go to do that.

That’s why I think government support is still necessary for customers.

JM: Would you like to see these ‘green tax discounts’ on the purchase of EVs carry on right through to 2030?

EH: I would love to see it, but I don’t think that would be economically possible at this moment in time because of everything else the Government has currently got to face. While the green agenda is getting more money put behind it, I think providing the current ‘kickstart’ programme into alternatively fuelled vehicles is important. But once that momentum starts to grow, I would far rather see the money being put into the infrastructure, so that people have the confidence to buy EVs.

JM: How important is the decision to extend the sales of hybrids to 2035, rather than 2030?

EH: Essential. Absolutely essential. This goes hand-in-hand, and it’s back to that aspect of a joined-up approach. Where we have vehicles with extended battery range, then that will be fine, but I think hybrids bridge the gap to us actually getting that product range for everybody.

For your average customer who is doing 8000 miles year and only 20–30 miles a day, an electric vehicle is perfect for them. Someone who’s doing 100 miles a day, then we’re getting into the realms of it being a challenge to switch to an EV.

JM: How will the ban on new petrol and diesel-engine cars and vans change the way Arnold Clark operates? Or will it?

EH: As I said, it won’t. If it moves, I’ll sell it, rent it, lease it, or lend it to you. So, definitely not. It’s just a mechanism of transport for us. We’ll just get into selling those vehicles. What it will do is accelerate the digital journey for our customers.

JM: How has your digital growth increased over the last few months?

EH: Over the last five months it’s grown exponentially. We’ve been pushing ahead with the digital journey for the last three or four years, but I would have to say that I have probably advanced five years’ planned growth in five months, with customer acceptance of it. Perhaps it took a national lockdown and a pandemic for customers to fully accept that this is a valid way of shopping, or browsing. But it definitely has accelerated as more customers become more and more used to the new way of having to shop.

JM: How significant has that growth been?

EH: Since July this year, 93% of car sales had online elements, with customers creating an Arnold Clark account and agreeing documentation online. We’ve also had 170,000 downloads of the Arnold Clark mobile app since November 1, 2019.

Since May this year, more than 41,000 customers have paid their £99 reservation fee on ArnoldClark.com. We didn’t have the facility in place in May 2019.

There has been a 126% increase in our Deal Builder enquiries – essentially personalised online quotes – over the four-month period between August 1st and November 22nd this year, compared to the same period 12 months ago. Plus we have purchased 30,027 part-exchanges digitally after customers appraised their own vehicle using our new valuations tool.

JM: Importantly of course, there will be millions of new petrol and diesel-engine cars and vans still requiring servicing and maintenance; that, of course will continue at Arnold Clark. Plus there will still be a used car market.

EH: Definitely. To be fair, sometimes in the media — and I’ve picked up on it several times — they’ve said petrol and diesel vehicles will be banned by 2030.

There will still be petrol and diesel cars going around for at least 10 years after 2030 – probably even longer. They will require servicing, and Arnold Clark will continue to do that. Plus of course there’s the classic car market. Some of the cars we are selling new today will, in time, themselves become classics.

EH: The manufacturers are pushing hard with the vehicle development, so I certainly believe the vehicles will be there. It’s the infrastructure concerns which are the bigger issue.

I think, genuinely, given the versatility of the motor trade and motor manufacturers, 2030 is achievable. It will be hard, but it will be achievable. But will we have anything to plug it in to? That’s the bigger question.