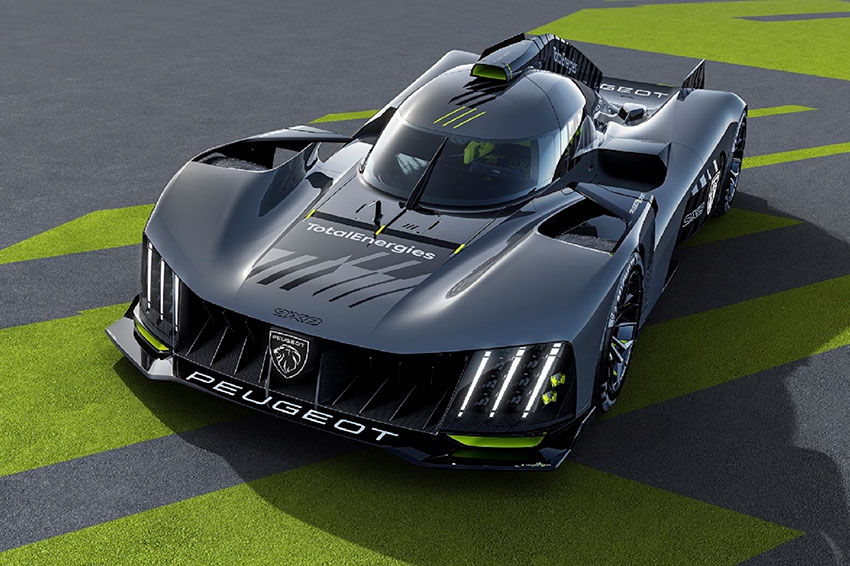 Made for the track: the Peugeot 9X8 hypercar

If you’ve ever thought of hybrid cars being boring, think again. This is the radical 9X8, a 670bhp hybrid hypercar which Peugeot will race in next year’s Le Mans 24 Hours, and the FIA World Endurance Championship, with Scot Paul di Resta leading the driver line-up.

While the 35-year-old from Bathgate claimed victory in the highly competitive LMP2 class at the French endurance classic last year, Peugeot hasn’t raced at the iconic La Sarthe circuit since 2011.

Next year it will return with this dramatic-looking 9X8 hypercar, powered by a 670bhp 2.6-litre 90deg V6 petrol engine that drives the rear axle, with a 268bhp front-mounted 900V electric motor-generator on the front axle.

That power is fed to all four wheels via a seven-speed gearbox and will automatically balance power from the engine and motor to deliver a maximum of 670bhp. 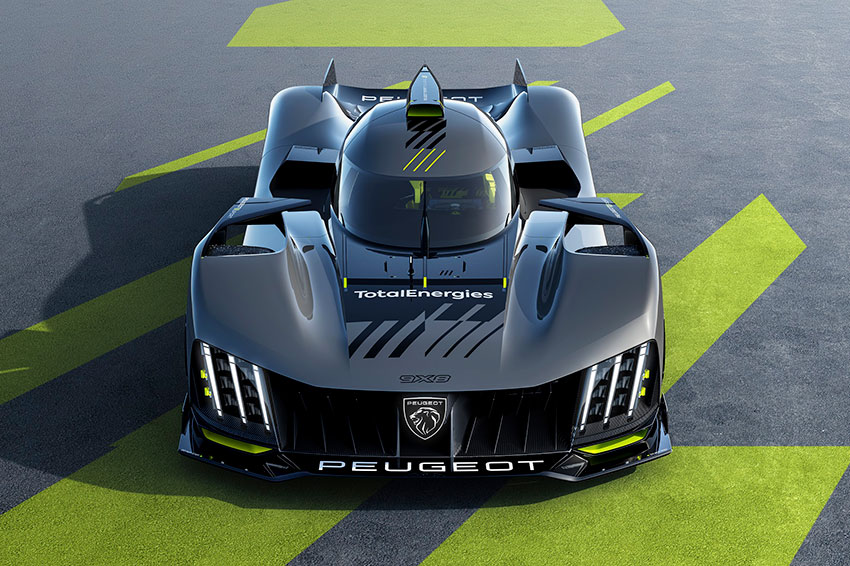 But the most innovative aspect of the 9X8’s design is … there’s no rear wing to boost downforce. Why? Well while rear wings have long been one of the key aerodynamic devices used to generate downforce, Peugeot Sport says the high aerodynamic efficiency of the 9X8 allows it to run without one.

Peugeot is taking advantage of the new Le Mans Hypercar (LMH) rules to take a hugely innovative approach to maximising aerodynamics and downforce.

‘The regulations stipulate that only one adjustable aerodynamic device is permitted, without specifying the rear wing,’ Peugeot Sport technical chief Olivier Jansonnie said. ‘Our calculation work and simulations revealed that high performance was effectively possible without one.’

Intriguingly, Jansonnie hasn’t specified which aerodynamic element of the 9X8 has instead been made adjustable. 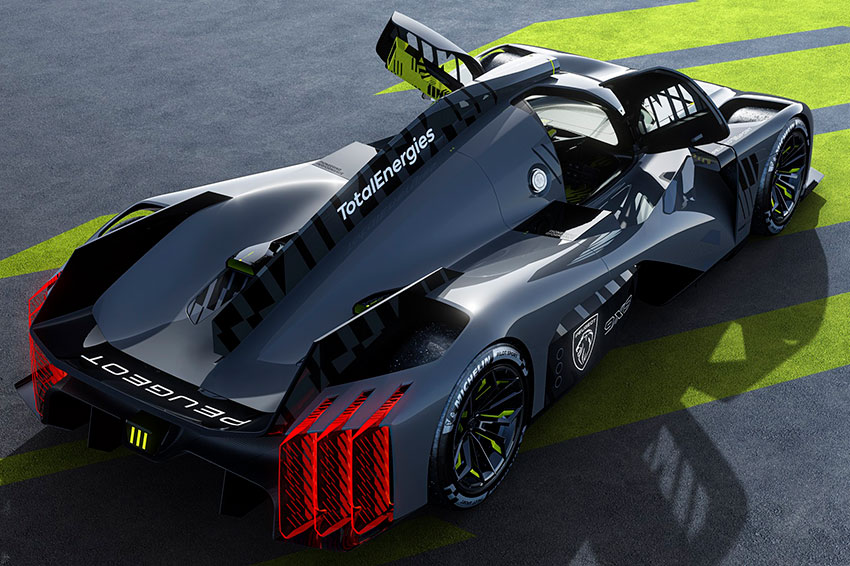 The new LMH rules cap the total powertrain output at 670bhp and include specific controls on key bodywork areas. However, they do give considerable freedom to manufacturers to demonstrate completely different designs and technology.

The dramatic sculpted external lines of the 9X8 are all focused on maximising aerodynamic efficiency. Look closely and you’ll spot the sleek integrated mirrors, wing vents above the tyres and even sculpted wheel rims.

The ‘claw-like’ headlight design mirrors one of the key Peugeot design signatures found on the French carmaker’s road-going cars.

Special attention has also been paid to the design of the interior of the hypercar. The cockpit has been modelled on the firm’s i-Cockpit design.

‘We wanted to take a special approach to the cockpit which, until now, has tended to be a purely functional and indistinctive aspect of racing cars, with no brand identity whatsoever,’ Peugeot design director Matthias Hossann said.

‘The combination of our colour scheme and Peugeot’s i-Cockpit interior styling signature have provided the 9X8’s cockpit with a distinctive feel and make it immediately identifiable as a Peugeot.’ 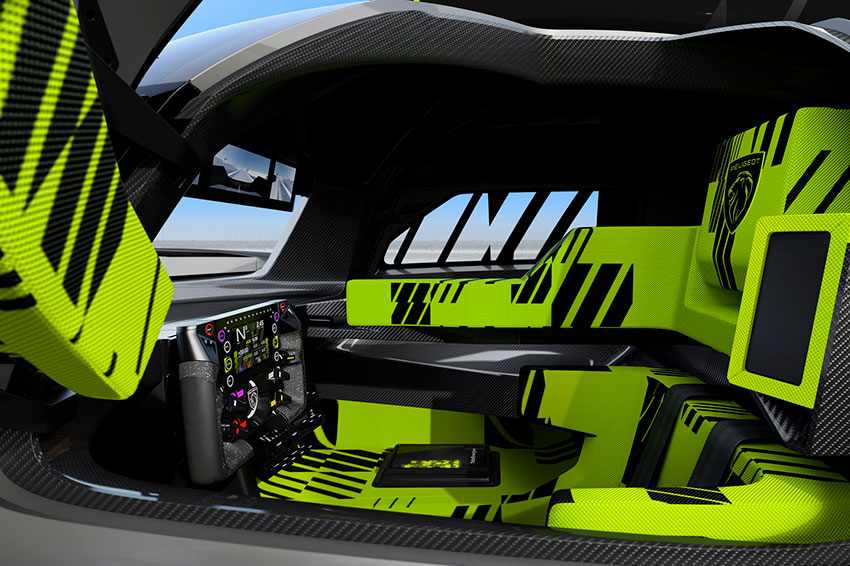 And why the 9X8 name? Cleverly it refers to both the firm’s motorsport heritage and electrified branding. While the 9 prefix has been used for the firms previous Le Mans challengers, the 905 and 908, the X denotes Peugeot’s four-wheel-drive technology and hybrid powertrain. The 8 suffix links to the firm’s current road car line-up, such as the 208, 3008 etc.

Peugeot will run two 9X8 race cars, each with three drivers, in the WEC and at Le Mans next year, with Di Resta being joined by fellow ex-Formula 1 drivers Kevin Magnussen and Jean-Eric Vergne, plus Loic Duval, Mikkel Jensen and Gustavo Menezes. James Rossiter is the reserve driver.

And Di Resta, who will also lead the test programme for the new 9X8 scheduled to start before the end of this year, admits he can’t wait to get back into sportscar action when he tackles the 2022 WEC and Le Mans.

‘Everyone wondered what the hypercars would look like and now they’re here,’ Di Resta, the former 2010 DTM champ and current Sky Sports F1 audit, said. ‘The 9X8’s aggressive, innovative stance and strong brand identity are a big surprise.

‘It’s a fantastic opportunity to join Peugeot as a works racer and be part of the next era of sportscar racing with the new-generation of hypercar.

‘For me, it’s really exciting to be involved right at the beginning of this project. With Peugeot’s history of endurance racing and competing at the front of the LMP1 field at Le Mans, it was all the motivation I needed to get onboard.’ 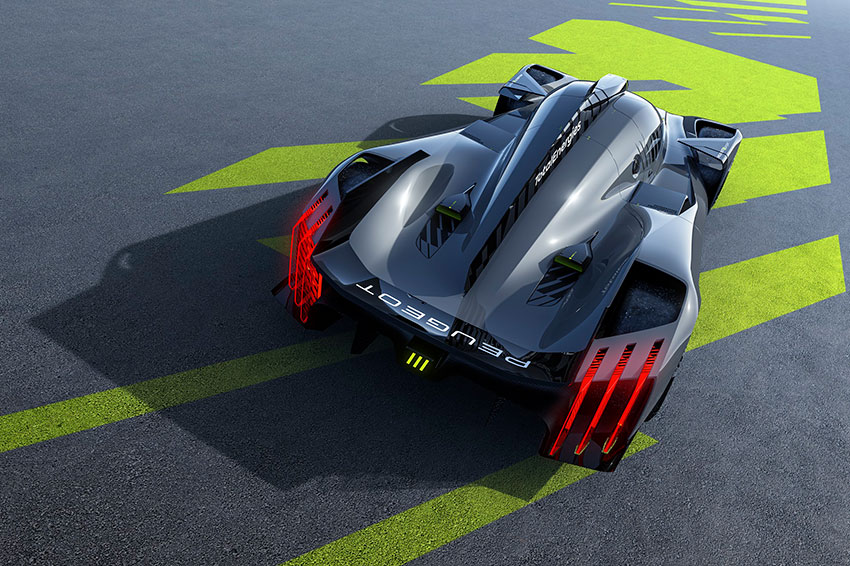