We take a look inside Sir Arnold Clark’s classic car collection in this series. In this instalment, we cover vehicles from the 1950s, of which there are four. 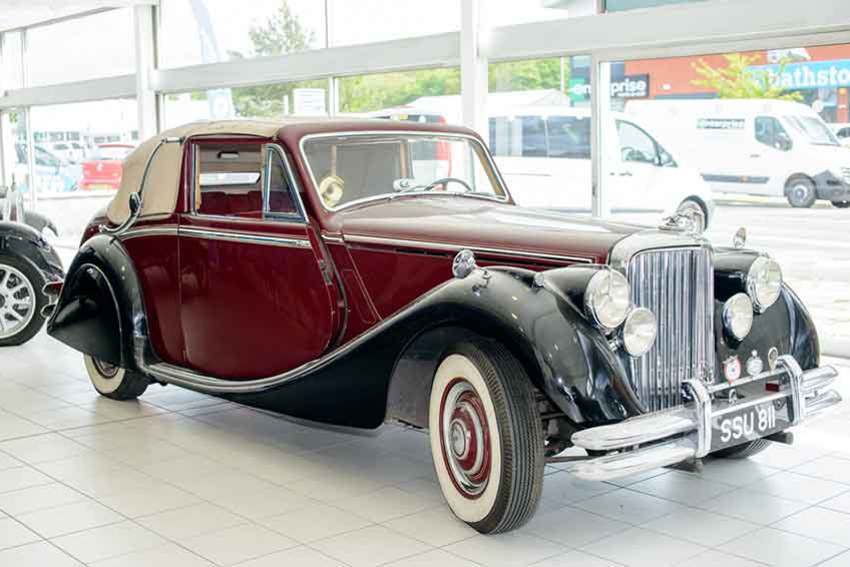 Last week, in a special instalment of this series, we took a look at Sir Arnold’s cars with royal connections. The two cars covered were from 1948 and 1950, which leads us on nicely to this week’s exploration of Sir Arnold’s collection of vehicles from the 1950s.

During the 1950s, new technologies came to the fore and cars become more technologically advanced, with the advent of features such as air conditioning, power steering and in-car radio.

In 1948, the Morris Minor launched and quickly became one of Britain’s best-selling cars. As with the Ford Model T in the 1910s and ‘20s, the aim of the Morris Minor was to provide affordable motoring to the masses. The Minor was described as a ‘design classic’ and a ‘British icon’, and its smooth lines and compact style became a blueprint for many of the cars that followed in the 1950s. 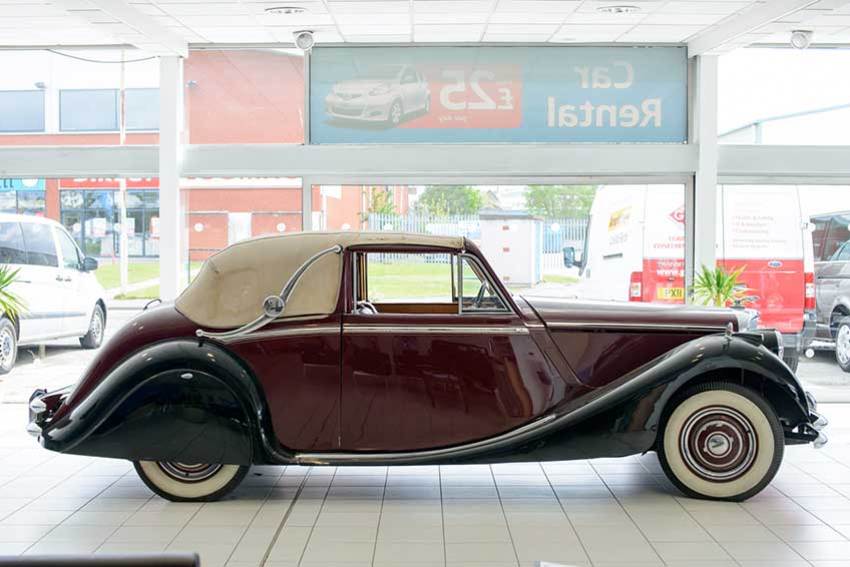 The oldest of Sir Arnold Clark’s cars from the 1950s is this Jaguar MK V 3.5 Convertible, which beautifully typifies the period of transition between vehicles from the 1940s and 1950s, where manufacturers were trying to bridge the gap from pre-war cars to a new style of vehicle for the post-war market. 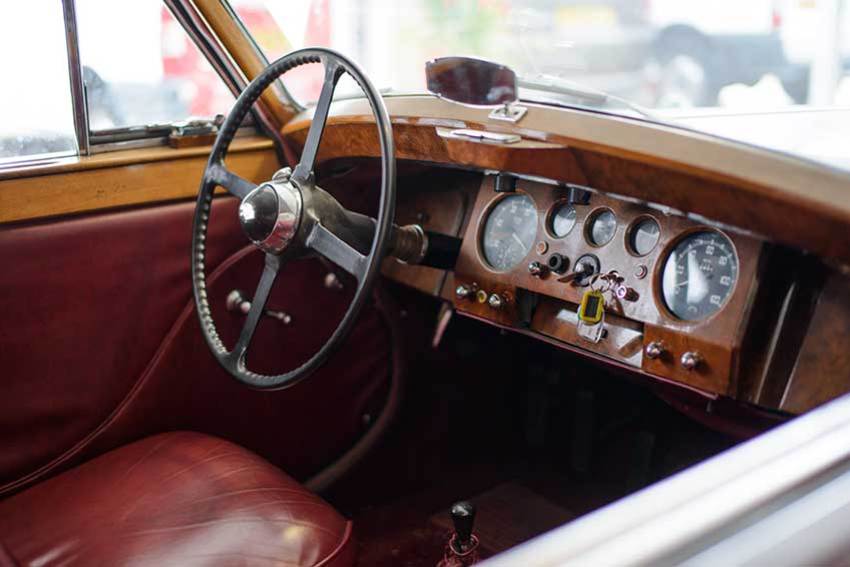 The well-proven six-cylinder push-rod overhead valve engine, which was little different from the SS100 which epitomised pre-war British sports cars, was retained, in both 2½ and 3½ litre forms, but a new box-section cruciform braced chassis was used.

The independent front suspension had Girling telescopic hydraulic dampers and two leading shoe hydraulic brakes were also used. Top speed was about 90mph and the model proved to be extremely reliable. In fact, it was popular among the British police forces and some examples covered more than 200,000 miles in service. This model has a modest 29,000 on the clock. 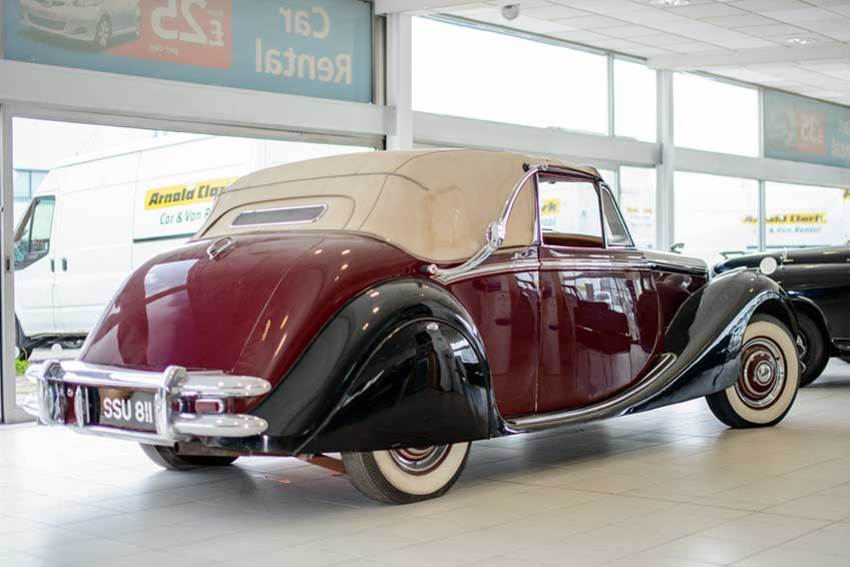 The 3.5-litre MK V saloon gained racing recognition when Irish driver Cecil Vard achieved third place in the 1951 Monte Carlo Rally with one. There were only around 500 left-hand drive drophead coupés made before the model was discontinued in 1952.

This example was imported to the UK in the late 1980s, following a period of restoration in America. It was offered for sale at Christie's Summer Vintage Auction in 1989 where it was acquired by its next owner, and purchased by Sir Arnold Clark in the summer of 2004. The car now resides at our Inverness Car & Van Rental branch. 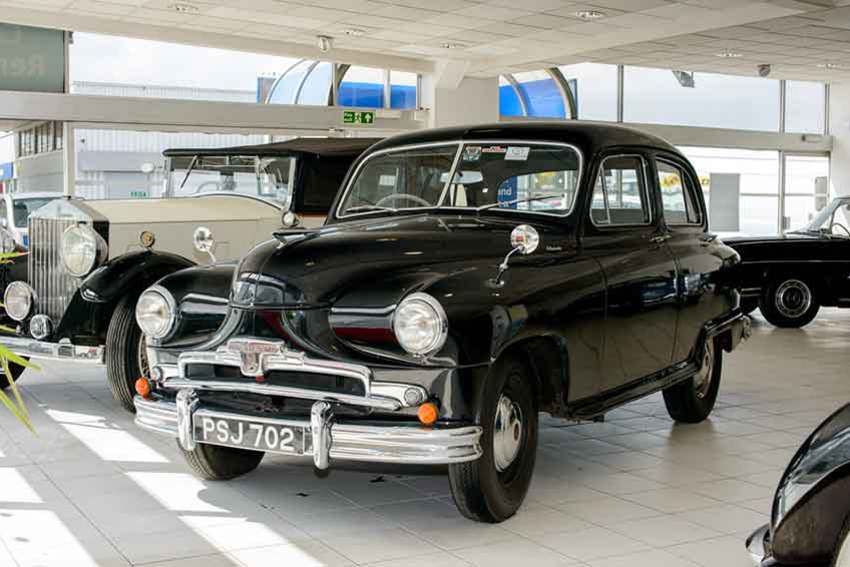 The Standard Vanguard was launched in 1947 and was generally considered to be the first all-new British car to hit the streets after WWII. Standard paid homage to Britain’s success in the war by naming the vehicle after the last of the British Navy’s battleships. 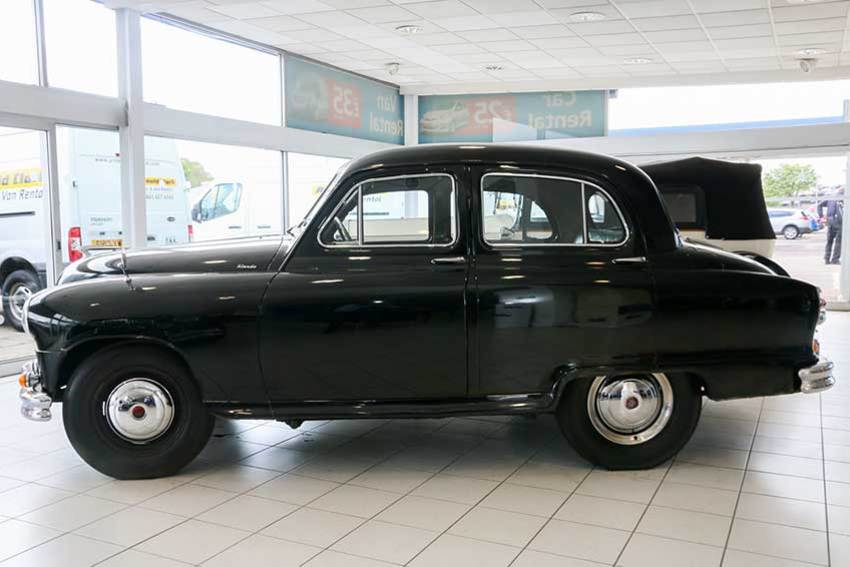 In 1953, Standard released the revised second model (Phase II), which was revealed at the Geneva Motor Show in March 1953. Revisions included improved headroom, 50% more luggage space, and longer front doors to improve accessibility. Mechanically, the clutch changed from cable to hydraulic operation and the previous anti-roll bar was removed. 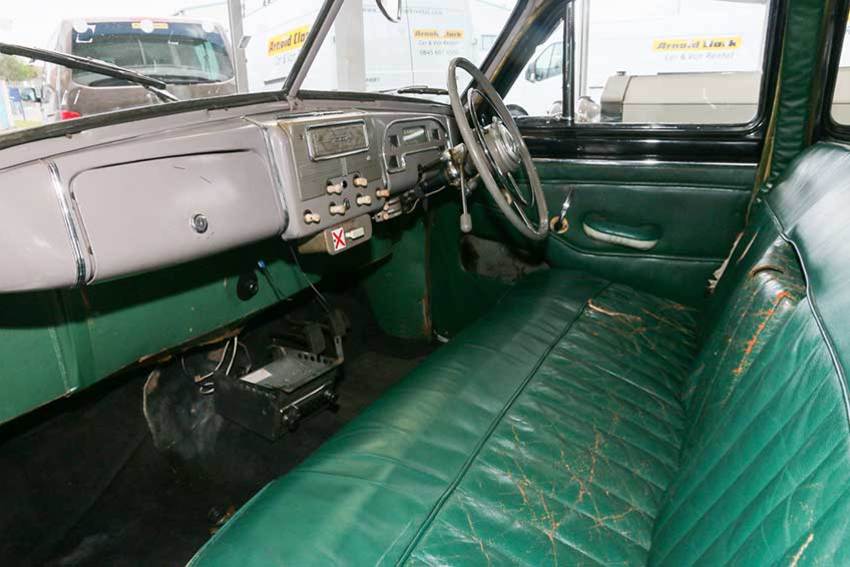 The top speed was 80mph, and the Vanguard II could accelerate from 0–60mph in 19.9 seconds.

Sir Arnold Clark purchased this model in 2003 and it now resides at our Inverness Car & Van Rental branch. 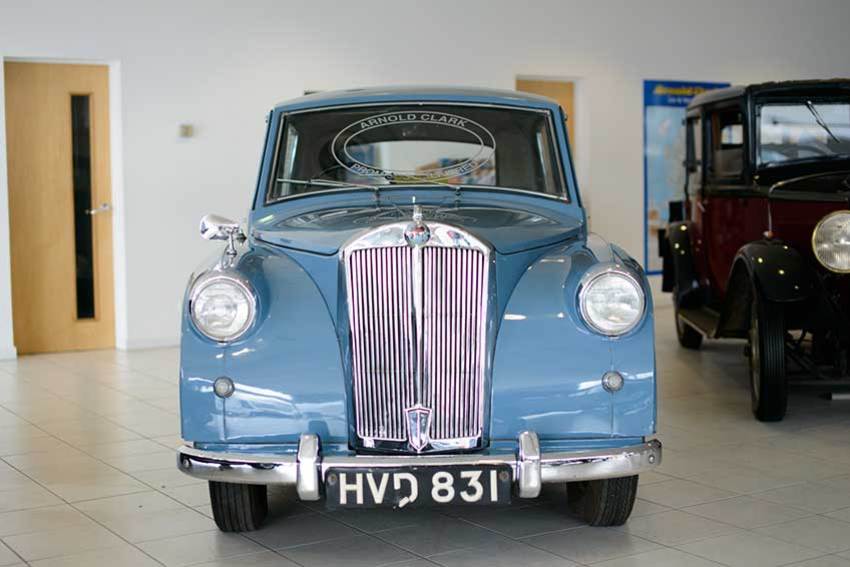 The Triumph Mayflower is a British car that stands out for its polarising style. While some admire the ‘razor-edge’ styling, others are less keen. Notably, James May called the Mayflower ‘the ugliest car of all time’. We disagree, of course.

The 4-seat 1¼-litre small luxury car was announced in 1949 at the British International Motor Show, and was manufactured until 1953, when this model was made. 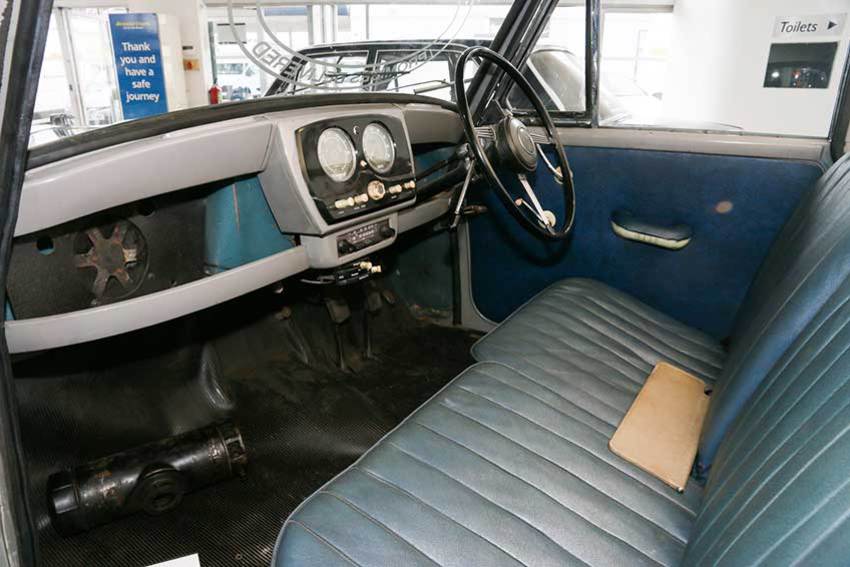 The engine gave 38bhp at 4200rpm, and the 3-speed gearbox with column shift came from the Standard Vanguard, pictured above. As with the Jaguar MK V, the Mayflower had independent suspension and telescopic dampers alongside coil springs. Top speed was around 62.9mph.

Leslie Moore of Mulliners of Birmingham designed the body with some input from Standard’s Walter Belgrove. 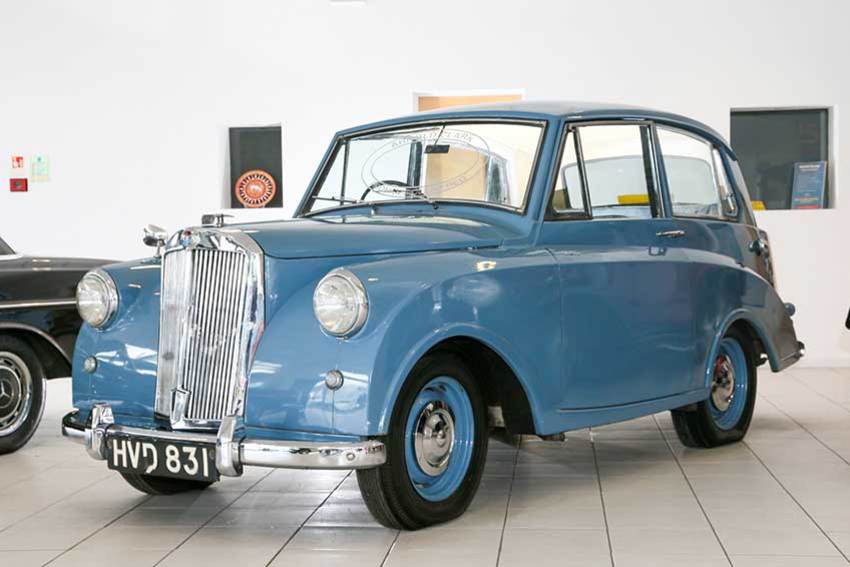 Despite its size, the Mayflower could comfortably fit four people. This Mayflower only had one former keeper before Sir Arnold who purchased the car in 1989. The car can also be found at our Inverness Car & Van Rental branch. 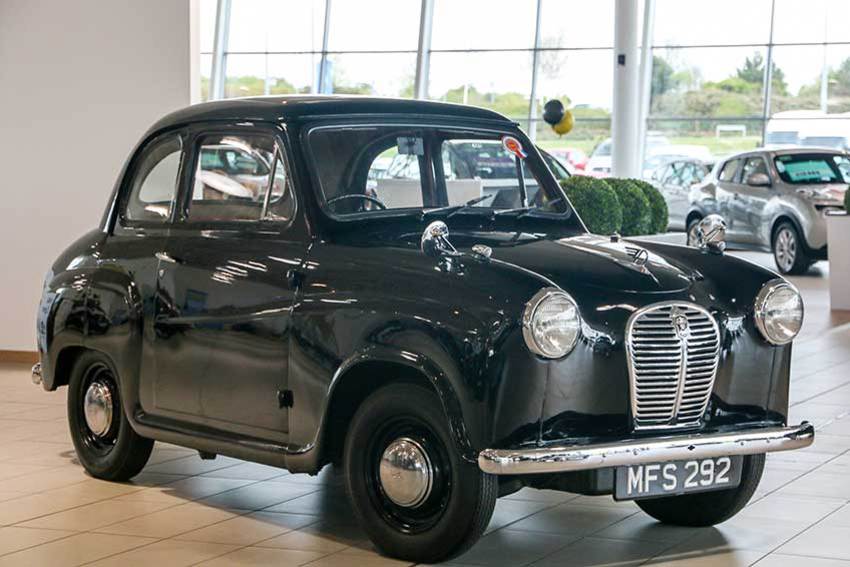 The A30 was Austin’s answer to the popular Morris Minor, as described at the start of this article. Austin in fact took Morris’ vision one step further, by undercutting the Minor by £62, making it even more affordable. 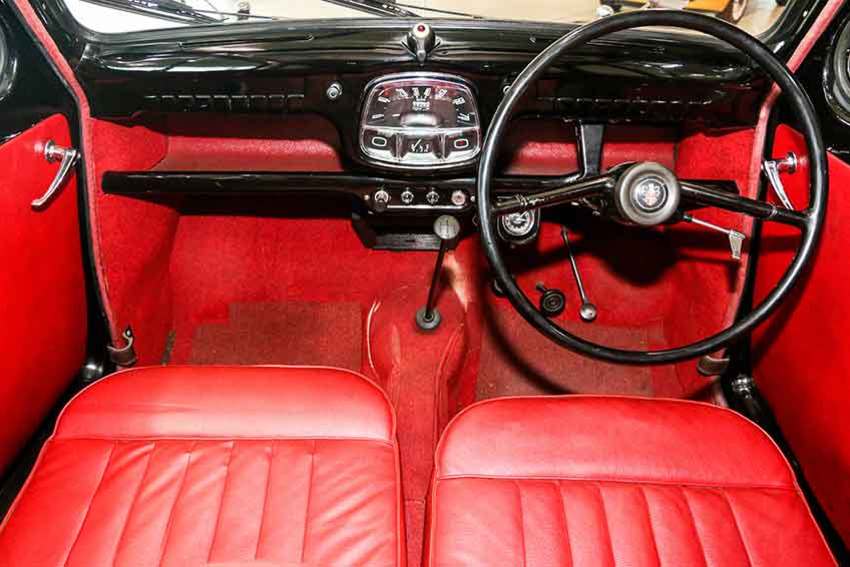 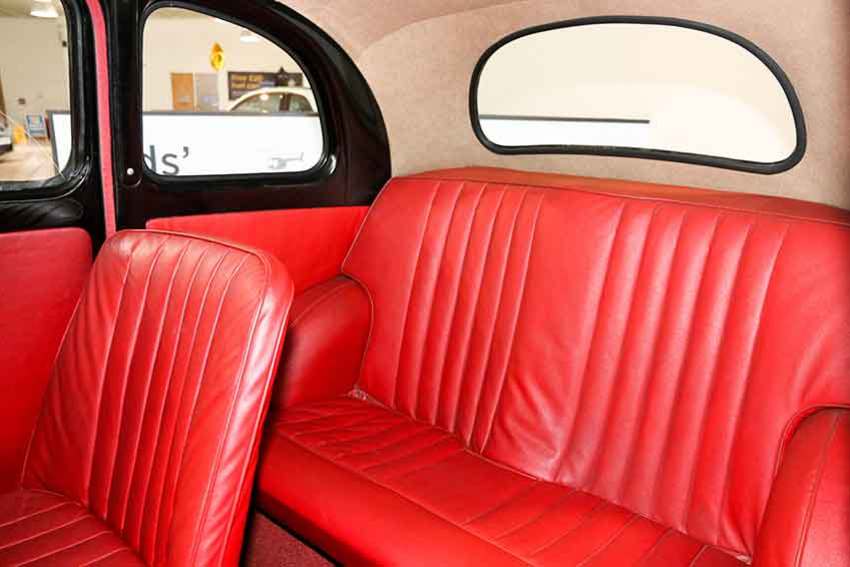 Sir Arnold purchased this car in 2001 and it now sits at our Stafford Car & Van Rental branch.