Women in the car industry

With news that women now buy 65% of all new cars, we thought we would look at the role women play in the automotive industry – from inventions to advertising 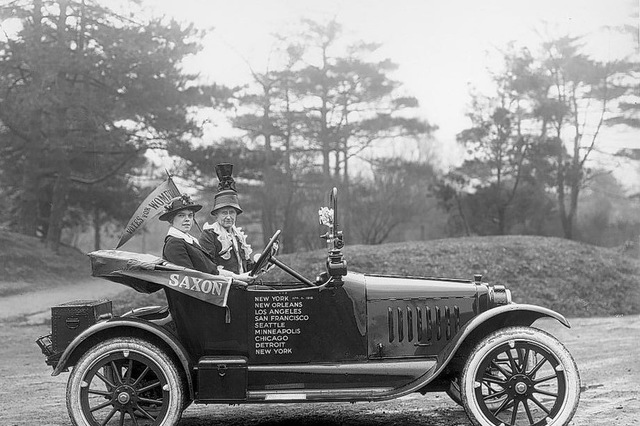 In 1910, just 5% of licensed drivers were women. Today, in most countries women are as likely to own a car as men. Image: Michigan Government

In 1902, Mary Anderson invented the first windscreen wiper. Silent movie actress Florence Lawrence is credited with inventing the first turn indicator and the full-stop signal that comes on when applying the foot-brake.

In 1916, suffragettes Alice Burke and Nell Richardson travelled 10,700 miles across America over seven months, not only spreading the message of women’s political rights, but also of women’s equality behind the wheel.

In 1910 just 5% of licensed drivers were women
People were very impressed with their technical abilities, and the vehicle served as something of a rostrum: they would stand on the seats of the car – a yellow Saxon – to preach their message to the masses. (Saxon even used an image of the ladies in its advertising.)

Cars were mass produced from about 1889; the first female New York taxi driver was Wilma Russey in 1915, and when Mrs Alice Ramsay became the first women to cross the States in an automobile, it was in 1909, she was 22 years old, and her husband didn’t drive at all.

Nonetheless, in 1910 just 5% of licensed drivers were women. Today, women are as likely to own a car as men in most countries, and have a massive influence on car buying decisions. Let’s ignore Saudi Arabia, where women have only recently been allowed to ride a bike, and they are still prohibited from driving a car.

There are a lot of jokes made about ‘women drivers’ and their inability to park or find their way from A to B. There are also presumptions made about how much women know about cars and the more technical aspects of automobiles.

However, research by the RAC has found that women are generally fairly confident making repairs on their own vehicles, with only half of respondents saying they would send their car straight to a garage if something went wrong. While men still had a greater level of confidence (56% compared to 27% said they were confident repairing a vehicle), this statistic serves to show that this isn’t exclusively a man’s game.

Interestingly, an AA survey found that women are more likely to be the ‘designated driver’ after a couple’s night out – perhaps proving that men are perfectly happy to trust a woman behind the wheel; perhaps simply because men end up getting more inebriated than they had planned and having to delegate the driving. (We do know that, in 2010, men were twice as likely as women to fail a breath test after a road accident.)

So, whatever your personal views are on the aptitudes of female drivers, the statistics quite clearly indicate that they are, at least, far safer drivers. An EU ruling in December 2012 made it illegal for insurers to calculate premiums based on gender but, up until that point, women were far less likely to claim than men and therefore had far lower insurance premiums. The statistics relating to speeding offences and accidents certainly shows women to be more cautious drivers – although men are more likely to say that they are ‘better’ at driving.

Car advertising mostly features the vehicle being driven by a man, usually dashing around country roads and often accompanied by a beautiful woman. But, based on the above statistic, car companies really need to reassess their marketing strategies and remember who is, more often than not, making the car buying decision.

Some companies are trying to tap into this market. The campaign for the Fiat 500L shows a young, trendy mum rapping about her life with the car in the background, in a clear attempt to woo their target market. (Apparently, they were trying to connect with young mums who wanted to retain their pre-children identity.) What shouldn’t be surprising is that you can’t really get away with depicting woman tied up in the boot of a car, and hope to appeal to your female (or, one would think, any) audience. 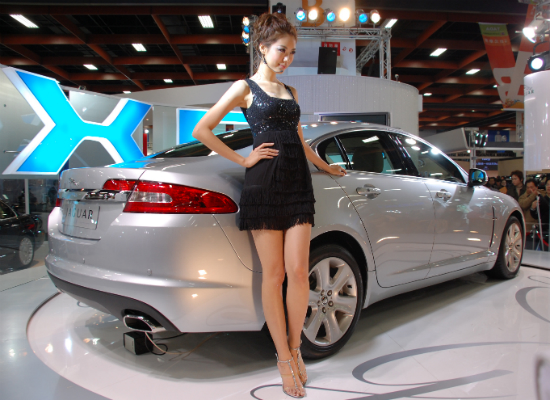 When it comes to advertising fast cars, nothing works as well as an attractive woman

Extremely crude research by the Daily Mail – in which they sent a member of each sex around the same ten dealerships – saw the woman being offered better deals at 6 of the 10 sites.

The woman was offered the better deal at 6 of the 10 sites
Perhaps, they argue, women have an advantage, as the salesmen are eager to impress? The ‘research’ concludes that, although women ‘get the better prices’, they may have to endure being chatted up and indeed patronised.

Slightly deeper research suggests that women approach car shopping in a totally different way to men – they like to do their homework, aren’t afraid to ask for advice, and don’t get worried about asking potentially stupid questions of the car salesman. The upshot of this is that, according to HPI, women make more sensible decisions and are happier with their eventual purchase.

51% of women – compared to just 27% of men – will consult someone they know and trust, who knows about cars, prior to purchasing a car. Presumably as a result of this, most women in the HPI survey were satisfied with their last used car purchase (only 35% were unhappy), while 43% of the men said they didn’t feel they got a good deal. All this could just suggest that men are just harder to please, of course.

A helpful, if slightly patronising, market has thus emerged – companies offering to assist women with the car-buying process. There are numerous websites and blogs offering tips to women and providing ‘resources’, as well on how to avoid the pitfalls of being under-informed and overwhelmed.

And when a woman does go shopping for a car, what does she look for? The Custom Royal La Femme 4-door hardtop, available in the 50s, was rather blatantly aimed at women – the accessory package included a ladies umbrella.

Fast forward to 2013, and we still see cars that are designed especially with women in mind: the good news is that car manufacturers are recognising the buying power of women and catering for their needs – not (just) with pink trim and stickers, but by, for example, creating adjustable pedals for people of different heights, using lightweight materials for seats and doors (catering for those with less upper-body strength) and installing safety features that women tend to be more interested in than men.

Apparently women are also more inclined towards cars with cup-holders, due to the fact that they evoke feelings of safety. Certainly more safe than balancing a cup of coffee on your lap.

Honda has even designed a car specifically for women called the Honda Fit. It comes in pink, and has a special windscreen that blocks UV rays. It's currently only available in Japan. 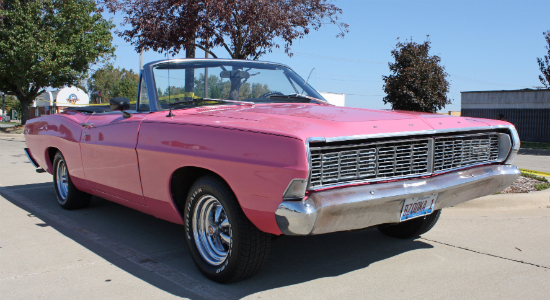 Pink, the rarest colour for a car

Women in the automotive industry

Henry Ford employed women as assembly workers and welders as early as 1922 (although he never intended for their roles to be permanent.) They were paid the same wage as men so that they could “dress attractively and get married.” The first woman to work in automotive design was Helene Rother, who worked at General Motors from 1943.

Today, women such as Mary T. Barra are the female role models of the industry – she is tipped to be the next CEO of General Motors, having worked at the company for over 30 years. With a background in electrical engineering and now responsible for the design, engineering, programme management and quality for General Motors’ vehicles around the world, she is shaking up the male-dominated culture of the auto industry.

In the United States in 2012, 24.2% of jobs in the Motor Vehicles and Motor Vehicles Equipment Manufacturing Industry were held by women. Just 1.8% of automotive body and related repairers were women; just 1.2% of automotive service technicians and mechanics were women. Women do, however, make up nearly 60% of the clerical staff within the motor industry.

At AC, we have some brilliant women doing great work - in various roles. 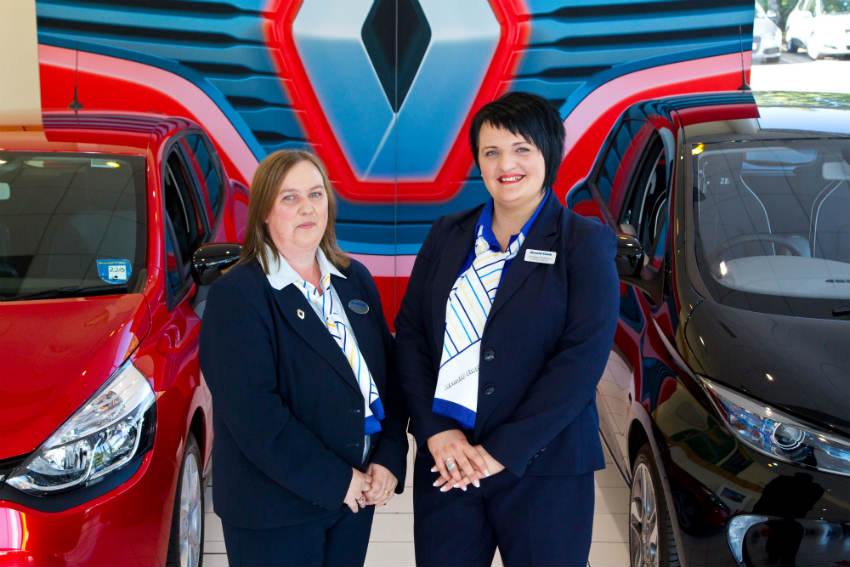 Valerie (left) has worked for Arnold Clark for 13 years, while Lyndsay has been in the motor trade for 14 years

Valerie Headley has worked for Arnold Clark Renault in Dundee for 13 years. She has spent 4 years as a service advisor, was senior service advisor for 7 years, was assistant service manager for 2 years and, in July 2013, was given the role of Service Manager at the dealership.

Lyndsay Anderson has been in the motor trade for 14 years, both with Ford and Renault. She started on the switchboard, moved to the body shop and then to the service department in 2004. She’s since been a service advisor, a supervisor, an assistant manager, and was made a manager at Arnold Clark Renault on Pollokshaws Road, Glasgow, in August this year.

“Since moving to the service side of the business 10 years ago, I have worked both directly and indirectly with my Operations Managers. I am glad that they, along with the company directors, actively support and empower women within what is stereotypically a male-dominated industry. As our business grows and develops in the coming years, I hope that we will see more women earning senior positions within the company, and I can honestly say... that's something I'm very much looking forward to being part of!”

So, if you are a woman and you're worried about applying for a role at Arnold Clark – don't be. Arnold Clark realises the importance of simply hiring the right people for the right job.