Emission-free vehicles will be coming to London, as part of a new Government-funded project 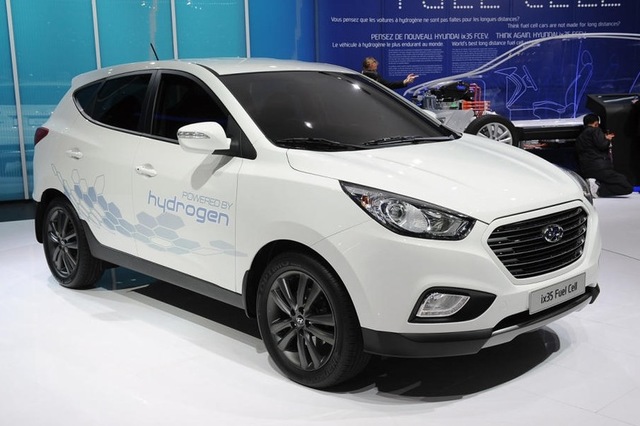 Emission-free, hydrogen-powered vehicles will soon be arriving in London as part of a new Government project aiming to increase the number of ‘clean fuel’ cars on the road.

The project – known as the London Hydrogen Network Expansion (LHNE) – will be the first hydrogen transport network in the UK and aims to put hydrogen-fuelled vehicles into daily business use.

Five Hyundai ix35 Fuel Cell models will be initially produced, which will be the first assembly line-produced, fuel cell cars in the world.

The philosophy behind Hyundai’s new ix35 fuel cell cars is to create a car that offers the same practicality, safety levels and driving experience as a regular ix35, but with zero exhaust emissions.

What is a fuel cell vehicle?

This is a type of vehicle that has its own fuel cell installed, which cleverly uses hydrogen and water to produce electricity to power its on-board electric motors. Cars with fuel cells are extremely environmentally-friendly as they produce zero carbon emissions – the only emission they produce is water.

The five Hyundai ix35 fuel cell cars are the first of 1,000 cars that Hyundai has said it will produce between now and 2015. The majority of these cars will be available throughout Europe, where the European commission has already established a number of schemes promoting the use of hydrogen vehicles.

Tony Whitehorn, President and CEO of Hyundai Motor UK, said: “Hydrogen delivers considerable environmental benefits and we are looking forward to working closely with the other partners to drive forward its widespread introduction.”

If you can't wait for the super-efficient and environmentally friendly ix35s, search our current stock for a new or used model.